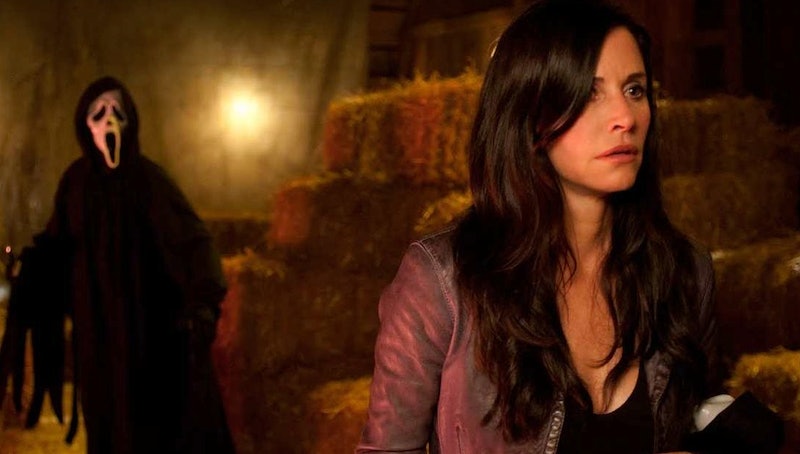 If I'm being completely and totally honest here, the Scream franchise really didn't need to go past the second movie. Scream and Scream 2 are basically Kevin Williamson and Wes Craven at their best: The films are totally '90s, self-aware, and smart in how much of a satire they are. The third film is pretty much a travesty compared to those two, and the fourth, while great for the whole nostalgia factor, was sort of pointless and overdone. That said — a fifth Scream movie, Scream 5 does not need to happen. But it might, because this is Hollywood.

According to Uproxx, Harvey Weinstein of The Weinstein Company has really been pushing for a fifth Scream film, while his brother, Bob Weinstein, wants to just move forward with that Scream TV show that's in development over at MTV. In Harvey's own words, this is the logic:

Everyone lived in Scream 4 ... I’m begging him to do the movie and just end it. We’ve milked that cow.

So, basically, if Scream 5 does happen, here's your earliest spoiler alert ever: Everyone is going to die. Poor Sidney Prescott — she's escaped psycho killers in '90s ghostface masks about four times now, and still, she once again faces the threat of ending up six feet under. Girlfriend just needs to move to an island and get a volleyball named Wilson for a BFF, because she's clearly just cursed.

But seriously, Scream 5 doesn't need to happen. Harvey Weinstein is right when he says they've milked that cow — they milked that cow 13 years ago. Here's a novel idea: Let the franchise die, and focus on making better films instead of half-hearted attempts at sequels meant to play upon the nostalgia of twenty- and thirtysomethings who grew up with the film. Would that be so hard?