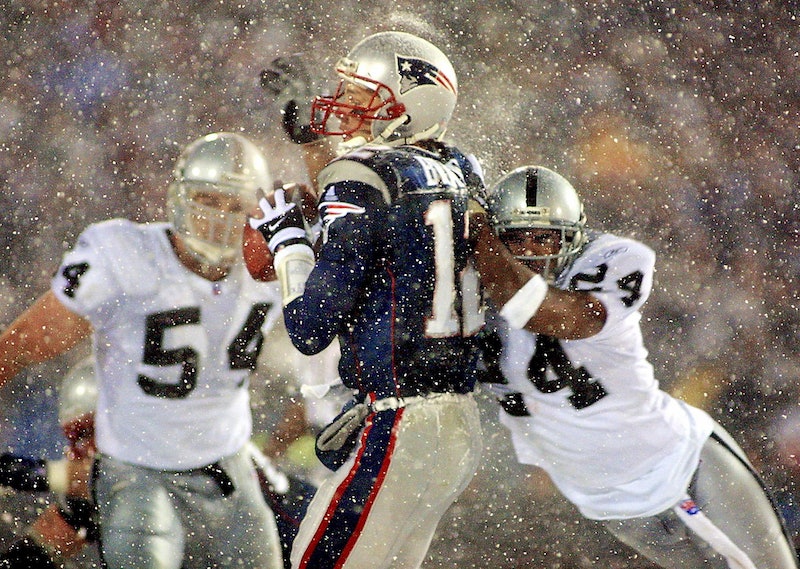 The NFL has had no shortage of controversy in this tumultuous season, and now the most anticipated game of the year has fallen victim to yet another scandal — #DeflateGate. Following a blowout win against the Indianapolis Colts, superstar quarterback Tom Brady and the New England Patriots have come under intense scrutiny for allegedly under-inflating the footballs used during the game, potentially affecting the outcome. And when gossip involving Brady and the Pats emerges, the Internet does what it does best — it pounces. The memes of #DeflateGate have proven that the Internet, like Peter Pan, will never grow up, and as much as I hate to admit it, I think I'm alright with that.

Of course, nothing is trendier than adding the suffix "gate" to a potential scandal, except maybe captioning old photos of the players involved with undeniably juvenile yet shamelessly hilarious jokes. And considering that this particular controversy is all about footballs it seems that we've all become over-eager adolescents who can't wait to talk about Tom Brady and his, well, "balls." Brady has insisted that he "didn't alter the ball in any way," and that he was unaware of any under-inflation, but some critics and analysts, like former Dallas Cowboys quarterback and FOX color analyst Troy Aikman, aren't so convinced. After all, as Brady himself said during Thursday's news conference, "I choose the balls I want to use for the game."

And while the jury is still out on what exactly happened with Tom Brady and the rest of the Patriots' balls during last Sunday's game, one thing is for sure — the memes that it has inspired are by far the best part of the controversy.

Tom Brady — Out Of Context

Proof that any press conference about balls will result in absolute hilarity.

Neither do I, Tom.

Yeah, I mean, I guess. Also, did he really say that?

Good to see that someone on the Patriots thinks this is funny.