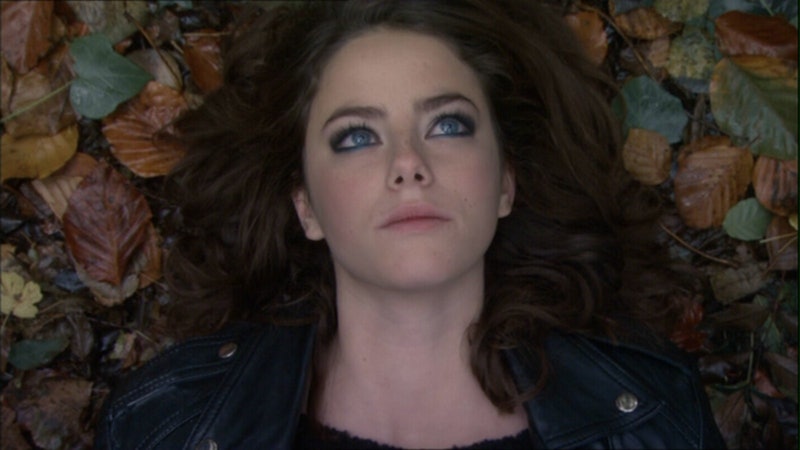 If you're unfamiliar with Skins, then you A) don't keep up with British television or B) didn't a Tumblr in 2011. Suffice to say, it's the U.K.'s spin on teen drama, and it makes the problems on Degrassi look like child's play. Scodelario's Effy was at the center of chaos in the Skins world: a morally ambigious teenage femme fatale. This enigma didn't have a dark side, she was the dark side — and it shrouded her in a rare kind of power. Scodelario is set up for this Pirates role, because Effy was in every way a modern day pirate who totally could teach Captain Jack a thing or two about eye make-up.

Allow me to state my reasoning, in case you don't think an unknown could fill such swashbuckling. MILD SPOILERS AHOY, if you haven't gotten through season (series? let's just stick with season) three of this treasure of a show.

1. She could drink any sailor under the table.

I'm sure Effy would be down for some rum... like maybe as a light treat between classes. Though she'll certainly imbibe, in Effy's world, rum is for little bitches. This is someone who casually takes drugs on the regular, and is rarely seen without a cigarette hanging from her lips.

Perhaps to the point of fault, her independence shines especially in the earlier seasons when she was a hard-partying spitfire. Consider this: Elizabeth Swan at 18 was still struggling to breathe in her corset, both literal and metaphorical. Effy, four years Elizabeth's junior, was sneaking out of the house, partying all night, and slyly returning the next morning with raccoon eyes and Courtney Love hair.

Even when Johnny Depp was doing his Pepe-LePew-meets-Keith-Richards thing, you still wanted to bone him, right? That infallible sexual magnetism is a part of any good pirate's swagger, and Effy absolutely has it. Not only is she a knock-out, but she manages to use those sparkling, mischievous eyes to captivate two boys simultaneously.

4. She can be wildly deceptive.

Annnnd about those two boys. They were best friends until Effy came along and played with their hearts for a whole season. Between Effy suppressing her feelings for Freddie and hooking up with Cook, it was a whole hot mess. Whether you're on board with manipulation or not, you need to have a good pokerface to getting the upper hand in a sword fight... and Effy always had a mask at the ready.

5. She has a secret soft side.

In spite of her hard edges, there's vulnerable girl inside, and what makes a pirate redeemable is their ability to love, if not wisely. Romantically she softens with Freddie, but what I find especially precious is how she takes the ever-innocent Pandora under her wing. It's always important to be a mentor to someone, even (or especially) when you're teaching them how to pick up drugs (ahem, "salad.")

6. She ran away to find adventure.

Okay, she ran away because she almost killed Katie during a shrooms trip, Cook half-kidnapped her, and they went on a Bonnie-and-Clyde style romp through every terrible town in Britain. A technicality — and maybe not an admirable moment — but it happened. And like it or not, running away from problems (usually the ones you cause yourself) is a trademark pirate move.

7. Her notorious reputation is known throughout the land.

"I've heard a lot about you Effy. Not all of it good." This remark, dating back to her very first featured episode in season one, sums it all up. Effy, while still a teenager, was a force known throughout the British party scene. Moreover, she had the most longevity throughout the series: After first debuting as Tony's (played by Nicholas Hoult, btw) wild-but-mute sister, she stayed along for three more seasons, and even returned later down the line for her own, special episodes. There's is no having to assert her importance, no need for a grand speech. With merely a coquettish smirk and a drag of her cigarette, Effy commands an audience, and I'm sure she could do the same with a ship.