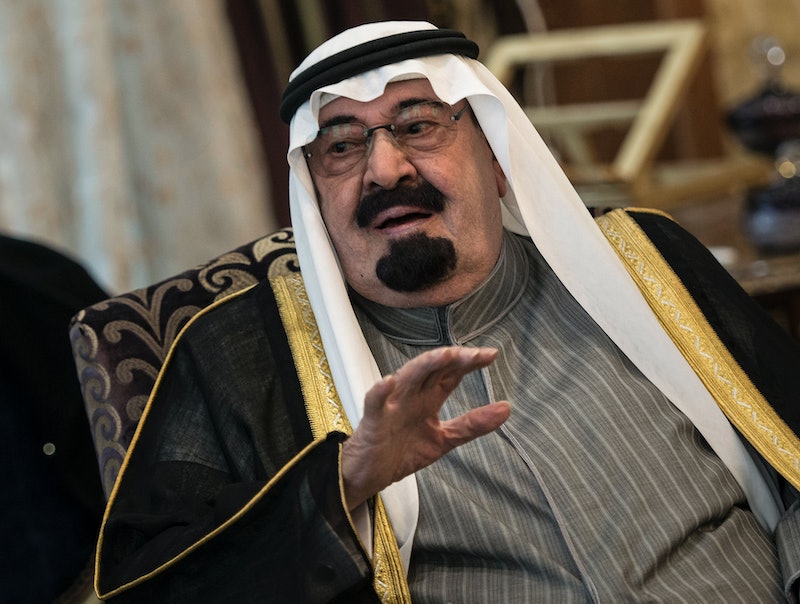 Following a grueling battle with pneumonia, Saudi Arabia's King Abdullah bin Abdulaziz al Saud has died, Saudi State television reports. The monarch was 90-years-old. King Abdullah began his reign in 2005, becoming the country's sixth king, and was known as a more progressive, reform-oriented leader who often butted heads with the nation's more conservative clerics. The news comes just hours after numerous Saudis, including journalists and members of the royal family, denied reports of the leader's failing health, calling earlier claims of his death "rumors" that were "far from the truth." Much of the guardedness seems to stem from the potential impact Abdullah's death may have on global markets, as Saudi Arabia remains one of the world's most oil rich nations. Already, American crude oil prices rose about 1.5 percent immediately following the announcement.

The 90-year-old was first taken to the hospital in Riyadh last week under the pretense of basic "medical checks." He had also been suffering from a lung infection, and in the last several years, had been treated for numerous health issues. Still, his death comes as something of a surprise after nearly a decade in office. Despite only assuming the throne in 2005, Abdullah served as the de facto ruler of Saudi Arabia as regent for many years prior, after his brother and predecessor King Fahd was left debilitated by a stroke.

Immediately before the announcement, state television channels broadcasted verses from the Koran, signifying the death of a royal. In a statement, officials announced,

His Highness Salman bin Abdulaziz Al Saud and all members of the family and the nation mourn the Custodian of the Two Holy Mosques King Abdullah bin Abdulaziz, who passed away at exactly 1 a.m. this morning.

Abdullah has served as a crucial ally to the United States in the war against terror and Al Qaeda, and is also remembered for his efforts to bring the traditional Islamic society into more modern times. As NPR notes, the monarch observed a series of staggering changes over the course of his lifetime, including the inception of Saudi Arabia itself, which was not itself officially founded and established until 1932.

Since then, however, the nation has risen to considerable international prominence, especially after the 1938 discovery of its huge oil reserves. Today, it is the only Arab nation to qualify as a G-20 major economy, and much of this recent development has been attributed to King Abdullah's 20-year leadership.

The king will be succeeded by his half-brother, 79-year-old Crown Prince Salman bin Abdulaziz, who has also served as the country's defense minister since 2012. Salman's regime is expected to closely resemble that of his older brother's, and will likely maintain the same friendly relationship with the United States and other Western nations moving forward.

However, some experts remain wary of how Saudi Arabia's oil policies will change as Salman takes power, as the country has thus far refused to slow oil production, which would ostensibly slow the free fall of oil prices. But Salman could choose to set a new precedent, changing oil futures and hugely impacting individuals across the globe.

Oil prices are now at levels that cause real concern on the streets of Saudi Arabia, with the prospect of succession the icing on top that has caused retail investors to take the market down another leg.

This policy may not make it through a succession period, where public support and good will is essential, particularly as it has nearly been 20 years since the last change.

The new regent could decide to keep existing policy, change it completely or anything he decides. Similarly he has free reign to realign Saudi Arabia’s foreign policy as he wishes, which is a discussion for another time and place, but could have significant regional impacts.