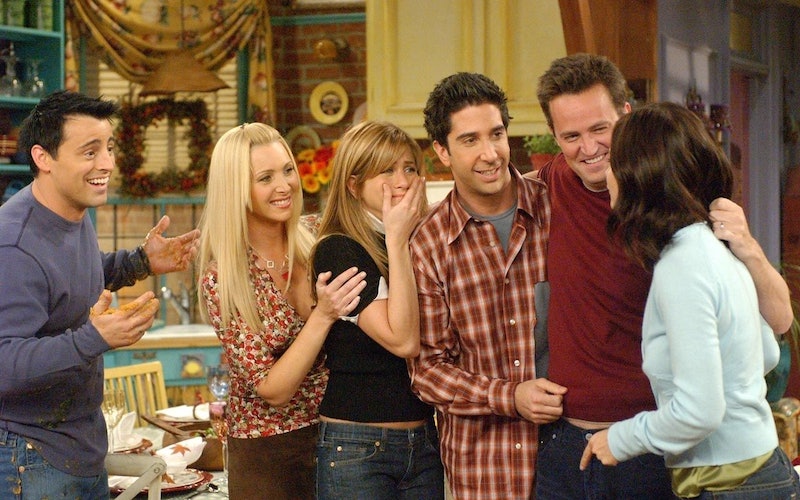 If you're still waiting for that Friends reunion, I'd advise you not to hold your breath. Oh, it could still happen... but it probably won't be this decade unless you can convince Jennifer Aniston to change her mind. She's open to the idea, sure, but Jennifer Aniston would like the Friends reunion to take place a rather long time from now — as in, as she said to E! News, when the gang is "really, really old." Seriously, she's both stepping on our dreams and paving the way for decades of fanfic to fill the gaps.

Why not wait 'til we're really, really old and then put us up there? That would be more interesting.

BUT IT'S SO LONG TO WAIT. Apparently, Aniston claims this would answer a lot more of fans' questions about the characters' futures:

Where am I? How many kids? Two kids? Three kids? Am I in retail? Am I fat? Is Joey Doughy Joey? Is Ross bald?

OK. Fine. Those are all very compelling questions. In fact, after hearing Jen's reasoning, I'm actually pretty onboard with this plan: As long as they don't wait until one of them dies — that would not be OK — I'm all for witnessing this cast in their elderly element. We've already seen them dealing with so much in their 20s and 30s, and got a glimpse of what their lives might be like in their 40s... but what will they look like after they've been living in those married, kid-filled, career-established lives for a long while? It's an intriguing question, when you think about it: What would Friends: The Elderly Years look like?

Obviously, I had to investigate.

After five blissful years of marriage and five kinda-OK ones, Ross and Rachel got divorced. I know, I know — but seriously, they were always on-and-off! Rachel then moved to Paris for a couple of years to finally fulfill her fashion dreams at Louis Vuitton, and it's there that she met her second husband, Jean-Luc: Portrayed handsomely by Idris Elba. They have a child together, and, eventually she becomes one of the head creatives at Michael Kors. (Of course, she and Ross will reconcile during the reunion.)

Ross wrote a couple books about dinosaurs and even became a dinosaur consultant on four of the fifteen Jurassic Park reboots/sequels that occurred between 2015 and 2055. He became a brief internet meme in 2021 after he tried to do an accent during a lecture again.

After his and Rachel's daughter, Emma, wrote a best-selling memoir about her parents' bitter divorce, Ross went therapy to better himself. He ended up having an inappropriate affair with his therapist, but after that all got sorted out, he found another one and really let the healing begin. He and Rachel reconcile during the reunion, because those two are still making up and breaking up like crazy kids.

And yes, he develops a bald spot.

Monica became a bit of a celebrity chef after she started designing meals for Gwyneth Paltrow, so her cooking finally gets the attention it so rightfully deserves. She and Chandler adopted one more kid, a little girl. She makes jams every summer (macrobiotic ones for Paltrow), and spends much of her time making sure Beyoncé can have her favorite produce no matter where in the world she's traveling. She was the binding force that brought the whole group back together after Ross and Rachel's divorce, and she's got a plan to reconcile the two come reunion-time.

The finale of Mad Men rocked Chandler's world, so he took some time off work and became a house-husband for a bit. It was during this time that Chandler grew closer to his parents, finally. He and Joey talk on the phone every night before bed, just to check in with each other's lives. (And they still watch Baywatchreruns together, over Skype.)

Joey books a role in a Marvel film — think a Hawkeye type role — which catapults him to the A-list. He runs for political office in 2035 and loses spectacularly.

When we meet up with him he's starring in Nancy Meyers' final film. He still spends every hiatus from a film living with Monica and Chandler, helping them with the kids.

After her husband Mike's tragic and sudden death (SORRY GUYS), Phoebe moves to Paris to live with Rachel. There she becomes a beloved street performer and writes her first book about her ragtag youth, and the spirits of her mother and grandmother following her through life.

After Rachel and Jean-Luc split up, Phoebe and Jean-Luc act on their longstanding feelings for one another. They pack up their children during summers and take them traveling through ancient cities. Phoebe finally communicates with the spirit of her mother via a cougar while camping in the Mojave desert.