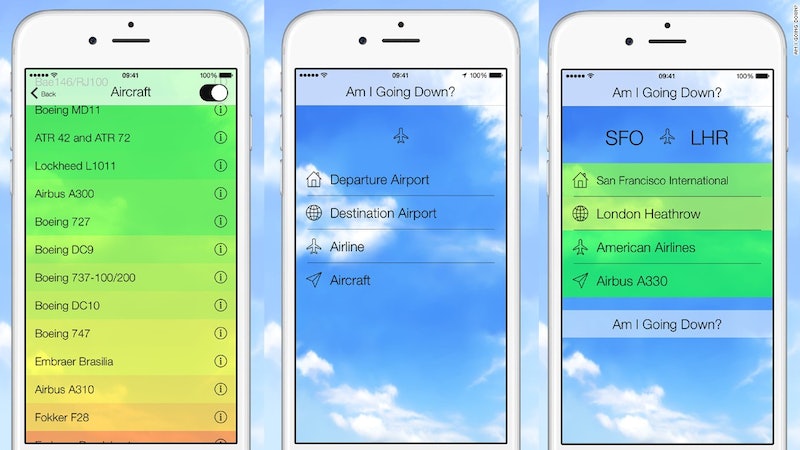 If you have a sense of morbid curiosity, I have found the perfect iPhone app for you — appropriately entitled, "Am I Going Down?" the new app from London-based company Vanilla Pixel uses real-life flight statistics to provide users with detailed information about their chances of meeting their demise on an airplane. Though the purported purpose of the app is to actually convince users that air travel is extremely safe, the timing of the app's release coincided unfortunately with the crash of AirAsia flight QZ8501. And the app itself was actually developed just before the disappearance of Malaysia Airlines MH370. Still, despite its poor timing and the bout of bad luck Malyasian-based airlines have suffered in the past year, developer Nic Johns maintains that the app has met with "positive response" from its users.

In an interview with CNN, Johns explained, "The initial inspiration comes from my co-founder and wife, Julie, who for many years has suffered from a fear of flying." In order to assuage her concerns, Johns examined more than 10 million routes, compiling data from the Geneva-based Bureau of Aircraft Accidents Archives, the United States National Transportation Safety Board and the Montreal-based International Civil Aviation Organization. And based on his careful analysis of these flight and route histories, Johns noted, "I wanted to present the fact that the vast majority of flights are incredibly low risk. Our app is meant as tool to help reassure fearful fliers."

For my analysis I only include crashes where there was at least one passenger fatality -- which is the relevant stat for those with a fear of flying. I then incorporate the volume of flights, weighted to the most recent 10 years, to provide the final 'one in a million' statistics.

The app, for dealing with such a morose subject matter, is thankfully un-intimidating and straightforward. For $0.99, you can download "Am I Going Down?" complete with its cheery blue skies and bright green fields (I guess when you're dealing with the possibility of a plane crash, you've got to do everything you can to make sure the aesthetics aren't scary). Users are first prompted to input their departure and arrival airport, then their airline and aircraft type. Only the departure and destination fields are required for the app to run its analysis — both the airline and the aircraft can be left blank with the "I don't know" option. For the most part, it seems that the greener-shaded options correspond to safer choices, while the yellow and red color codes seem to signify a more turbulent history.

Once all the information has been adequately provided, the only thing left to do is to ask the terrible question — "Am I Going Down?" And luckily, the answer is essentially always a resounding no.

For my most common flight, which would leave La Guardia airport in New York and land in George Bush in Houston via United Airlines, I have an approximately 1 in 4,710,903 chance of stepping onto a doomed flight. This means that I would "expect to go down if [I] took this flight every day for 12,906 years." Quite a long time.

Alternatively, if I were flying from Los Angeles to Australia, my chances of being involved in a plane crash increase to 1 in 2,700,760 — far more likely than my New York to Houston flight, but still incredibly unlikely (I would expect an accident if I took the flight every day for 7,399 years). Of course, if I were to fly Air New Zealand, recently ranked the safest airline in the world by AirlineRatings.com, my chances of death would decrease significantly to 1 in 4,787,909. According to the app's data, only once every 13,117 years would that journey result in tragedy.

Also incredibly safe, according to both ratings and "Am I Going Down," would be a trip from New York to London via British Airways, with only a 1 in 5,282,457 chance of an accident.

Even Malaysia Airlines, which saw tragedy befall two of their aircraft in the last year maintains low chances of accident at 1 in 1,088,068 for a trip from Singapore to Malaysia. Of course, all these statistics change based on the type of airplane you travel on, so for maximum accuracy, be very aware of all your flight details.

Though the app certainly doesn't seem like a ray of sunshine in an apprehensive traveler's life, Johns claims that the feedback he has received has been overwhelmingly encouraging. He told CNN, "The positive response from anxious fliers has been amazing, really encouraging."

Johns' app is one of the only sources providing such in-depth coverage of safety statistics in the aviation world, especially considering the gradual shift by airlines themselves away from discussions about security. Almost all major airlines are more interested in presenting themselves as the most customer friendly, the trendiest, or the most innovative, but seem more wary of calling themselves the safest, or even bringing the discussion into the spotlight. This is a more recent development, as original airlines and airline ads were eager to broadcast their pristine track records in order to convince wary customers to travel thousands of miles above the ground.

But now, with a number of high profile disasters fresh on the minds of many travelers, airlines have decided to steer clear of the s-word altogether. "When you talk about safety, you bring up a bad taste in people’s mouths,” Andy Trinchero, executive director of marketing at aviation marketing firm, told Time, “It’s something that people don’t even want to hear about, really."

For those of you who do want to hear about it though, "Am I Going Down?" may just provide the answers you've been looking for.

Images: Am I Going Down app; Getty Images