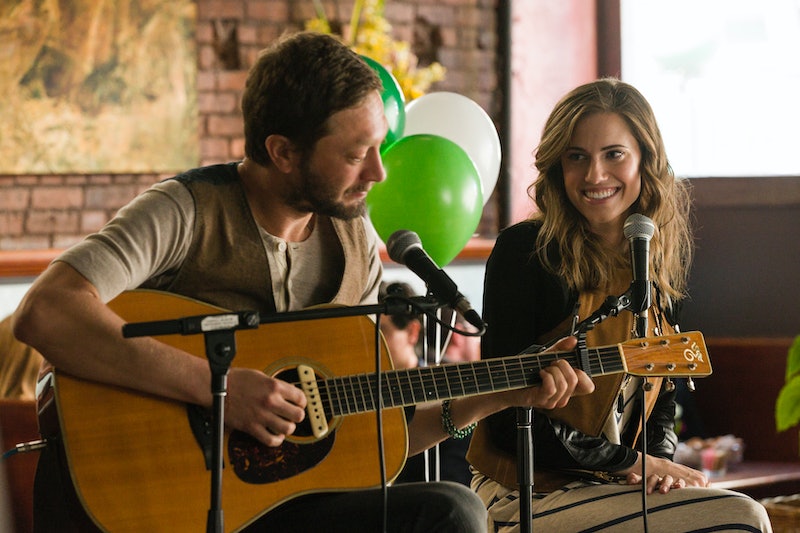 When it comes to Marnie's storyline on Girls this season, my emotions are a little mixed. Despite the fact that she makes me crazy at least half the time, I really do love Marnie, and I sympathize with her in that she has feelings for someone who's in a relationship. It's not like you can control who you fall in love with, and Marnie's love life has always been a big old mess. But then I hate her when I think about how she's having an affair with Desi... and then lets her apologize for being over paranoid. But mostly, I hate Desi for facilitating all the cheating, and... although it's difficult, it's time to separate the character from the man who plays him. In case you're wondering who's responsible for this guy, Desi is played by Ebon Moss-Bachrach, and you've probably seen him in a lot of movies and TV shows before.

Because Moss-Bachrach isn't actually Desi, I find it super easy to like him after a little bit of research. He's good-looking, his interviews make him sound charming, and his acting resume is ridiculously impressive. Have no idea who this dude is? You'll realize in a minute when I start listing off all of the roles he's snagged.

He's been in everything.

Seriously, when you have a minute, IMDB this guy — he hasn't stopped working in years. Although he's best known for The Lake House he's also been in movies like The Royal Tenenbaums and Mona Lisa Smile, and Girls is hardly the first time he's had a recurring role on a TV show. Most recently, he did a stint on Eric Dane's new military drama, The Last Ship, and he played Nick on Damages.

But he was never on One Tree Hill.

Even though Shosh recognized Desi as Lennon, the gay disabled hockey player on One Tree Hill, that is the one role Moss-Bachrach never played. I know, I know — I'm just as disappointed as you are.

He has a pretty healthy view of his Girls character.

Mostly in that while he doesn't necessarily validate Desi's actions (especially the cheating part), he does understand his the character he's playing. In an interview with HBO, he said:

I think Desi is a guy that likes to stay in the proverbial sunshine. If it feels good, he goes there and maybe doesn't realize what he's done until it's too late. Or perhaps he's like many guys that I've known that like to play it really close and get burned. They like to mix it up, they love the complication of infidelity.

Moss-Bachrach, I think I like you. Feel free to stick around on Girls as long as you want! Just stop making me want to hate Marnie's storyline.