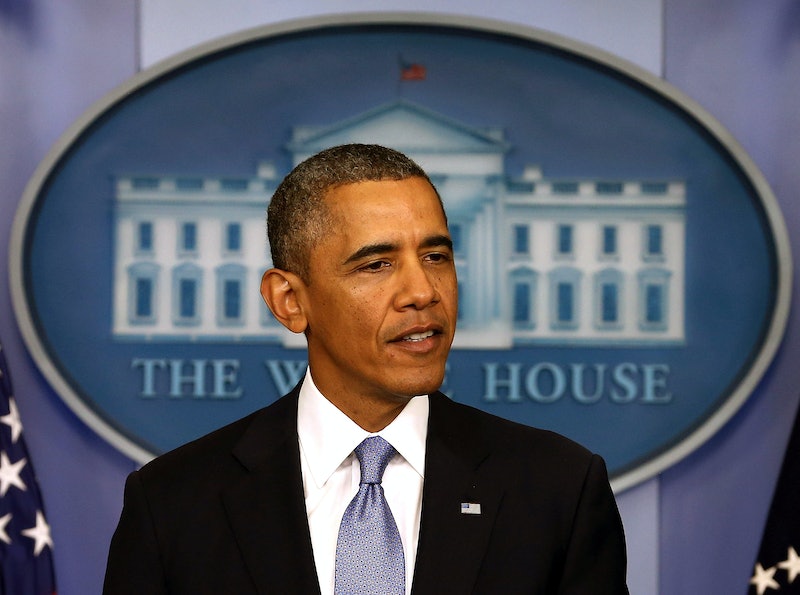 Millions of Americans were greeted by a smiling young woman on the Healthcare.gov webpage Tuesday morning. And no, she's not smiling about death panels; she's just happy to help you get insured. The federal government's healthcare exchange — one of the few things not derailed by the government shutdown that happened at midnight — launched this morning. And, surprisingly, things seem to mostly be going off without a hitch. (Well, besides the many error messages, which are the fault not of socialism, but heavy traffic.)

“Shutdown or no shutdown, we’re ready to go,” Health and Human Services Secretary Kathleen Sebelius promised yesterday. The healthcare law, covered by mandatory spending, is ironically not affected by government shutdown it played such a large role in creating. Sebelius compared the launch to Apple products, which have some glitches at the beginning, but are quickly resolved. “It’s a reminder that we’re likely to have some glitches. We’ll fix them and move on," she said.

An estimated seven million people will sign up for healthcare coverage through online exchanges. Already, on Monday morning, Healthcare.gov posted an error message after the influx of traffic overloaded the server. “Please wait here until we send you to the login page. Thanks for your patience!” the message read. Other sites, like New York's NY State of Health portal, are loading slowly. The site for the exchange in Maryland also said it was “experiencing connectivity issues” and asked visitors to return at noon.

Meanwhile, the Guardian's Harry Enten rounded up polling data on Obamacare. People still love the Affordable Care Act but feel just lukewarm about Obamacare, because the two are definitely not the same thing. Still, just about the only part of Obamacare that most people don't like is the requirement that all individuals get health insurance, which the marketplaces opening today are supposed to help.

We here at Bustle rounded up some things everyone should know about the launch of the health insurance exchanges, and how to sign up. At the same time, someone needs to messenger-pigeon a note to Congress saying Americans support the law and only one third want it delayed or repealed. (Just kidding — the postal service is running despite the shutdown.)

Unfortunately, the people with the most time on their hands today — federal employees who are indefinitely furloughed while Congress plays a massive game of chicken — don't need the healthcare marketplaces.