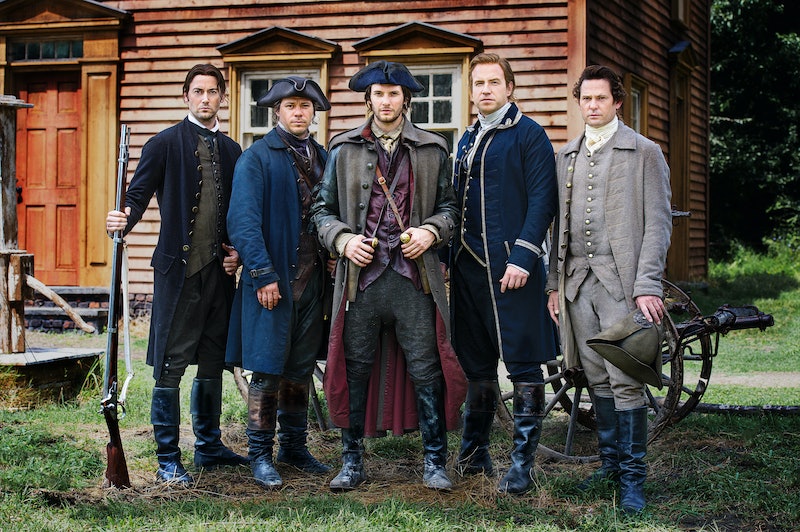 They call it the History channel, but my history class didn't have the dude from Breaking Bad and the guy from Prince Caspian capering around like Batman and Robin. And yet, Dean Norris and Ben Barnes will star in Sons of Liberty, History's six-part miniseries about the American Revolution that debuts on January 25. So, if I watch it, will it make up for all those times I ignored my AP History lecture to pass notes to my friends — or would I just be getting the sexed-up Hollywood version of the Revolution? How historically accurate is History's Sons of Liberty going to be?

Dirk Hoogstra, executive vice president and general manager of History, told the Los Angeles Times that the show planned on taking some artistic license to make it more adventurous. "You can't make a documentary," Hoogstra says. "No one knows what was said. Some parts you have to fictionalize, so you can't be 100 percent factual."

The show's website also has a huge disclaimer on it, saying, "[ Sons of Liberty ] is historical fiction, not a documentary. The goal of our miniseries is to capture the spirit of the time, convey the personalities of the main characters, and focus on real events that have shaped our past."

In other words, we're getting the sexed-up version, but with grains of truth in there. So, what will have people who paid more attention in history class than I did crying foul?

Margaret Kemble Gage is a New Jersey-born woman married to British General Thomas Gage — aka a bad guy. According to the Houston Chronicle, the show took some, ahem, liberty with the details of her life. "Some historians believe that Joseph Warren had a secret source of information in the British camp and Margaret was at least a possibility. Other historians dispute that scenario," it writes. "Sons of Liberty takes huge and and overwhelmingly unsupported liberty in this area to spice things up, depicting Warren carrying on an actual hot and steamy affair with Margaret. Ye olde hubba-hubba."

They Get the Curses So Freaking Wrong

Don't be fooled by the cussing' in the dialogue, thinking you're finally getting a true picture of Ben Franklin as opposed to the idealized one that's always invoked when your grandparents tell you "a penny saved is a penny earned." In the parlance of Sons of Liberty, it's all BS. And it bothered one paper in Franklin's home state, the Pittsburgh Post-Gazette: "In the first night alone there are at least two uses of the profanity for 'bull hockey,' a term etymology sources suggest dates to 1915, 150 years after the events depicted in Sons of Liberty. So consider this an action film that liberates the American Revolution from the shackles of history."

The Setting Looks a Little… Odd

If the colonies look funny, it's because they're not even in this hemisphere; the same Los Angeles Times article notes that the film was shot in Bucharest, Romania. So don't go looking for your favorite view of Boston Harbor.

Does it matter? That's up to you. If you're looking for all the details to be right, stay away. But satisfied that, as the Post-Gazette describes, it gets the "broader strokes of history correct," — and would rather see our Founding Fathers drinking, swearing, and having sex — History obliges.