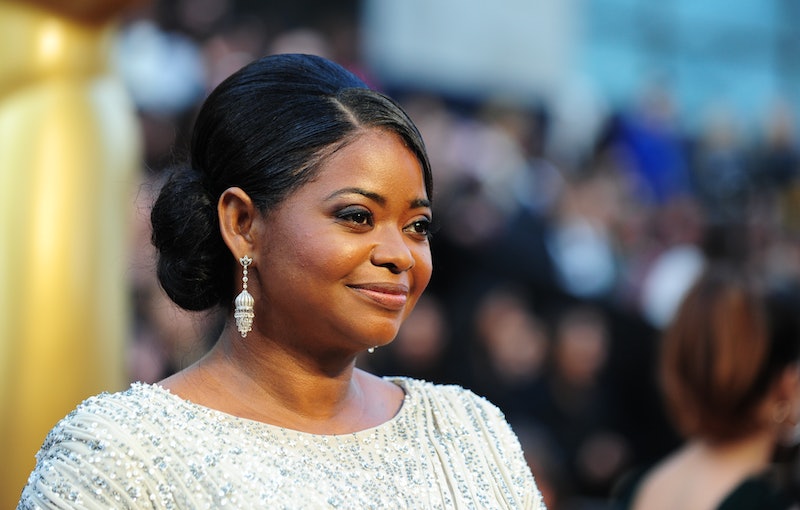 Sometimes it seems like every woman in Hollywood is completely over the moon at the thought of having a baby of her own. But as Octavia Spencer pointed out at the Black or White premiere, that is not always the case with female celebrities, and you can count the 44-year-old Oscar-winning actress in with those who have no urge to have kids. Octavia Spencer, who has no children, told Us Weekly that she is "not maternal at all" and opened up about her thoughts on playing a maternal figure in her latest movie.

Despite playing a grandmother in Black or White who is at the center of a custody battle for her granddaughter, Spencer said there was no channeling her natural maternal instinct for that role — because she doesn't have one. Instead, she said her portrayal of the character was what was "written on the page."

Spencer's openness about not feeling a maternal instinct serves as a good reminder that not every woman necessarily feels the need to have children. It is also a good reminder of her unwillingness to be typecast by the role she plays in a film, and the fact that people shouldn't assume that what is seen onscreen is reflective of her reality.

As seen in the photo above, she looks plenty happy holding an Oscar instead of a baby. And it is worth applauding Spencer for continuing to step up and actually say so, as she has done before in a roundtable discussion for The Hollywood Reporter back in 2013. She said,

I should be married and have 19 kids. And now I'm thinking my eggs are dying on the shelf. They're going to go past their expiration date. But it's what I chose, so I'm fine with that decision.

And now, since she's begun to open up about why, she can serve as a good role model for non-famous women who might be struggling to explain why they don't want to have children. Despite research indicating that motherhood has actually been in decline in recent years, there is undoubtedly still a negative stigma that follows women who are childless by choice. Some seem to think that childless women hate children, that they are selfish, or that they are secretly unhappy and missing out. It's a little ridiculous in an age where feminism and the encouragement of women to make their own choices about their lives have become so mainstream that there is still this ongoing narrative where the default assumption is that a woman definitely wants children. Spencer does women who don't feel this way a favor by putting a face on the viewpoint — a famous and successful face at that.

And on top of that, she also revealed in the Us Weekly interview that she chose to be in the movie Black or White because she liked the message and the way the message was presented, especially when she said there are "certain archetypes that are played a lot for women of color." So kudos to her for providing a different perspective on choosing her roles wisely, and not being afraid to point out that's what they are — just roles.