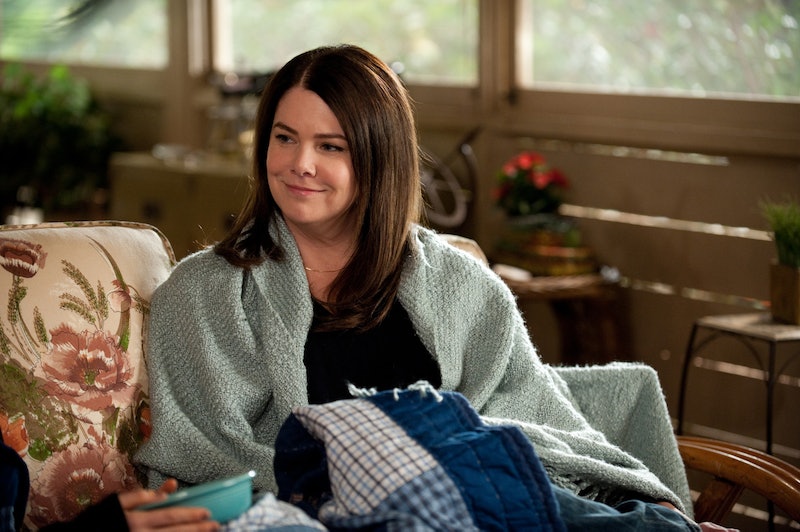 If there's anything Parenthood's taught its fans over the course of six seasons — you know, besides things like the importance of family and that anyone can open a school — it's that Mae Whitman can cry . The actress, who plays Amber, has expertly sobbed her way through episode after episode, and whether it's been over a brutal car accident, a painful breakup, or just a bad night at the Luncheonette, there's never been a time in which Whitman's perfect cry-face didn't cause viewers to burst into tears of their own. Yet in Thursday's episode, Amber's weeping was, surprisingly, overshadowed by that of another Braverman — her own mother, Sarah.

As played by Lauren Graham, Sarah's never a particularly emotional member of the TV family. Sure, she's gotten choked up from time to time — because let's be real, it's practically Braverman policy to have a good cry at least once a year — but mostly, she's stayed calm. So the moments in which she does let it out are special, both for their infrequency and the fact that Graham, next to Whitman, is one of the show's best criers. It's a skill she's deployed on both Parenthood and Gilmore Girls, and without fail, her tears have led to some of the most impactful moments of her series. Below, Graham's TV crying at its best:

Parenthood, "We Made It Through the Night"

Trying to name Graham's most emotional scene from last night's episode is like trying to pick a good quality of Ruby's — in other words, it's impossible. There was the teary duet with Mae Whitman (to a Joni Mitchell song, natch), the wedding conversation with Zeek ("I can hardly wait" killed me), the other wedding conversation with Hank... it was all just too much, but I wouldn't have wanted one of the last Parenthoods any other way. Thanks to Graham and her tears, the penultimate episode was as beautifully emotional as the shw ever been.

This scene didn't involve any actual sobbing, but try getting through Graham's rendition of "I Will Always Love You" — sung as a drunken, emotional Lorelai thinks there's finally hope to win back Luke, who's watching — without bursting into tears.

Parenthood, "Tales From the Luncheonette"

The reappearances of Seth (John Corbett) caused many of Sarah's early cries, from the time she was terrified Amber was turning into him to that heart-wrenching scene when she sobbed with Drew over his lack of a father. In this season 3 episode, Sarah swallowed her pride and asked her sister for money to help Seth out, arguing, through tears, that she's responsible for his well-being. "I'm mean, he's their dad," she cried, breaking Julia's — and viewers' — hearts.

The scene may have had a few comedic moments ("now they're putting up ribbons"), but it was mostly a sad, serious look at a defeated Lorelai. "It's over," she told Rory, after getting broken up with by Luke. "I wrecked everything." Yet the only thing worse than one crying Gilmore is two crying Gilmores, such as in...

Some Gilmore fans might argue that the events of season 6, when Lorelai and Rory aren't speaking, contain the toughest episodes to watch, but for me, the show's most painful episode is this installment of season 4. Overwhelmed by life and unable to reach each other, Lorelai and Rory both end up weeping into the arms of a friend. "I don't even have time to see my kid," Lorelai cries. "I miss her." And as all fans know, nothing is more effective in producing the tears than our beloved Gilmores kept apart.

Much of season 2 was devoted to Amber's out-of-control behavior, and it all came to a climax in "Slipping Away," when a high Amber took a joy ride with an even more intoxicated driver, leading to a serious accident. Although the episodes to follow were certainly emotional (Zeek's "you don't have permission to mess with my dreams" speech was brutal), it was the moments right before, when the teen fought her mom about getting into the car, that hurt the most. Watching a stunned Sarah scream-cry over her daughter's mistake was a haunting moment, and a career high for Graham. (Skip to 0:58 above.)

Gilmore Girls, "Those Are Strings, Pinocchio"

Rory graduated from Chilton, gave a speech in which she called her mother her "ultimate inspiration," her "best friend," and "the person I most wanted to be," and everyone (even Luke!) fell apart. Lorelai may have started the speech promising not to cry, but by its end, she was as much as mess as all of us viewers.