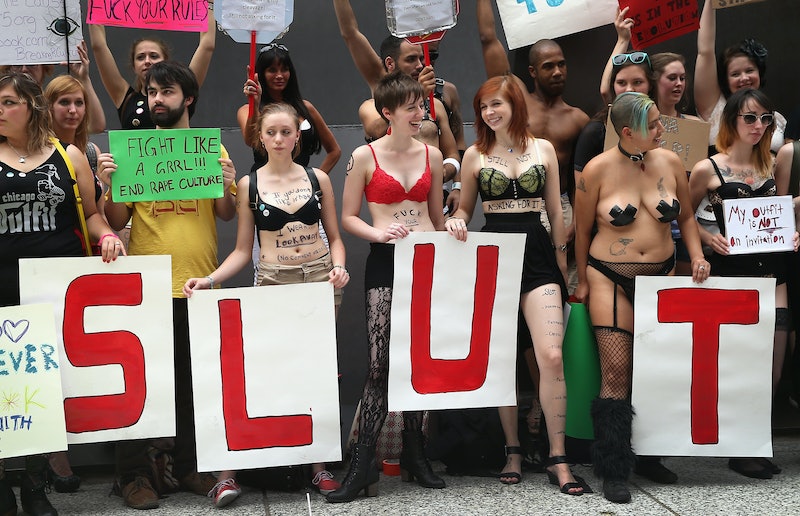 In 2015, the word "slut" seems to have more destructive power than ever. Although some feminists have labored tirelessly to transform this loaded, misogynistic slur, efforts to reclaim the word "slut" have largely failed, laments Jessica Valenti in a recent article for The Guardian. Part of this failure is due to the unremitting stranglehold of patriarchal culture (plus the Internet), and part of it has to do with ignoring the complex intersections of race, class, and gender identity that are inextricably tied to whether or not you can or even care to remake this dangerous word in your own image.

As someone who runs a sex-positive feminist site called Slutist, I grapple with this issue all the time. Rape culture rages on, and the "s-word" still has the power to police female sexuality and excuse or even incite violence against women. You can't take the word out of the hands of the oppressors, but you can deflate and pervert the meaning they desperately wish to hold on to. I personally believe that these small acts can make a difference. It isn't simply about reclaiming or not reclaiming, it's about using the term ironically and mindfully as a political power tool to subvert patriarchal rule. So whether you love or hate the word, those who attempt to reconfigure hate speech while fighting gender violence and sexual double standards should be acknowledged. Reclaiming the word "slut" is about removing the sting in any way we can, even when that way is mostly imperfect. So here are a few notable times folks have tried to repurpose "slut" — for better or worse.

The SlutWalk movement originated in Toronto in 2011 as a response to victim-blaming in sexual assault cases. Feminist activists rallied around a local police officer's abhorrent statement that “women should avoid dressing like sluts in order not to be victimized," and thus the first walk to raise awareness about rape culture was born.

Since then, SlutWalks have been criticized for being racist, transphobic, and more about parading around in your skivvies than actual political action. However, every SlutWalk has different organizers and participants, so no criticism holds true across the board. Some groups have even moved away from the "s-word" in order to appease those that say it distracts from the cause, but the fact that SlutWalks have taken place everywhere from Los Angeles to Delhi to Rio de Janeiro in the past few years only shows the powerful impact of this movement.

Written in 1997, The Ethical Slut is a primer on how to venture beyond monogamy in your relationships. The authors Dossie Easton and Janet Hardy make a point to redefine slut on their own terms within the first chapter. They write, "To us, a slut is a person of any gender who celebrates sexuality according to the radical proposition that sex is nice and pleasure is good for you." While many people don't associate the word with this definition, tying the term to an adjective that everyone associates with high-mindedness in the title can't hurt. When a seminal book reconfigures "slut" in this way, it immeasurably impacts those who read it.

3. Using "slut-shaming" as a negative term

So many headlines today include the term "slut-shaming" in a negative context. If one celebrity calls out another for wearing too little on stage, it's slut-shaming. If someone suggests a woman who is sexually active deserved to be raped, it's slut-shaming. My question is, if we hated "sluts" so much in our culture, why would it be bad to shame them then? The fact that left-leaning publications use this term critically means many people have moved away from the "women who go against sexual norms should be burned as witches" point of view. It might only be a step in semantics, but it's a step nonetheless.

A few years ago, if you googled the word "slut," you would come up with mostly porn sites and Urban Dictionary entries. Now, on the first page of results, you'll see a link to SLUT The Play. This groundbreaking theatre piece about slut-shaming and sexual violence in high school has been performed around the country and is redefining the context in which we see the "s-word." Instead of earnestly describing a promiscuous female, the word is employed to refer to its own destructive power. Even though this project isn't about reclaiming the word "slut" (in fact, they're against it), the way the play uses it still recontextualizes the term for everyone who sees it live or even hears about it.

As we know from conservative commentators, taking birth control means you are a slut (ahem Rush Limbaugh), so Sluts Across America created a website to show us just how many sluts there are in America. This birth control advocacy project has women write in their zip codes and describe the many reasons they are on the pill, from not being ready to start a family to having long, horrible periods or nasty PMDD symptoms. Then a cute little busty icon pops us so you can see where all the sluts live. The irony is on point but the message remains — if taking care of your sexual health makes you a slut, then who wouldn't want to be one?