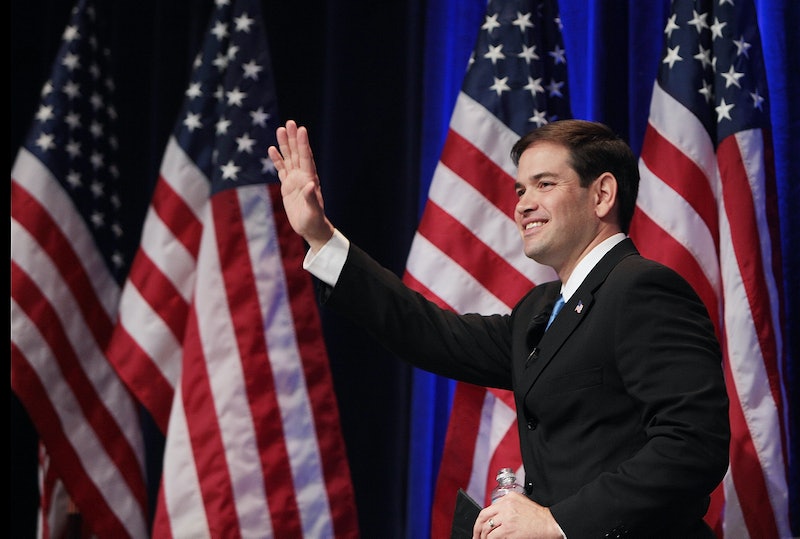 It's long been anticipated that Florida Sen. Marco Rubio might make a run for the White House. Now, recent staff hirings indicate that he is getting serious about a 2016 campaign. NBC News confirmed that Rubio hired Anna Rogers of Karl Rove's Super PAC American Crossroads. Although the move doesn't ensure a presidential campaign, it's a good sign that he is warming up.

Rubio hopes to raise at least $50 million to compete in the GOP primaries. Rogers is a veteran, with the PAC raising $200 million for Republicans in the last two election cycles. The senator's definitely getting serious about finances — it's alleged that Rubio will be skipping votes next week, instead opting to travel to fundraisers in California, Texas, and Illinois.

Rubio has a bit of a problem ahead of him. 2016 doesn't just mark an opening in the Oval Office, but possibly his senate seat, too. Florida law prohibits him from running for the senate and the presidency at the same time. But Rubio doesn't seem too worried:

If I decide I want to be president of the United States that’s what I will run for not with the intent of looking for a Plan B if it doesn’t work out.

He appears to be choosing the road to the presidency. ABC News reported that a senior Rubio advisor said, “He has told us to proceed as if he is running for president." If true, he's going to have to head out on the nationwide campaign trail soon.

Fortunately for the senator, he has an upcoming book tour that will run through swing states (this is certainly not by coincidence, perhaps a test run?) — allowing him ample opportunity for self-promotion. He also plans to meet with supporters and donors in Miami on Friday and Saturday to discuss his political future.

Fellow Floridian Jeb Bush stands as a potential financial roadblock. Florida-based donors will have a choice between a one-term senator or a name brand political heavyweight (Obama-Clinton flashback?). The possibility of a split donor-base doesn't appear to phase the senator. After Bush's announcement that he's considering running, Rubio spokesman Alex Conant said in a statement:

However, Marco's decision on whether to run for President or re-election will be based on where he can best achieve his agenda to restore the American Dream — not on who else might be running.

Rubio faces a series of challenges if he wishes to be the next Republican nominee for the presidency. We're still awaiting an official announcement about a run, but putting together a robust staff is a good indicator of candidate-in-waiting. When will we know for sure? The senator says he will decide "soon." And so the wait continues, but its highly likely you will see him behind a podium at the GOP debates.