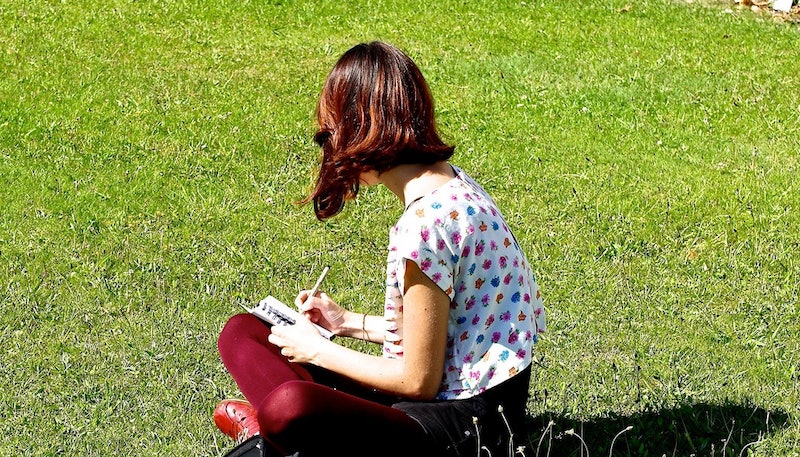 Coincidence? This week we got a chance to look at some of the most famous contemporary authors's handwriting, as we uncovered both Joan Didion's handwritten list of her favorite books and J.K. Rowling's Harry Potter outline that was literally written on a scrap of loose-leaf paper. And now today we get to celebrate National Handwriting Day by looking at so many other authors' penmanship — it seems both Didion and Rowling are ahead of the trend, as is typical of these two women.

National Handwriting Day also means we can take a look at our own scribbles to check that we still know how write with a pen and paper after texting and typing so often. I'll admit, my hand cramps up and dies after maybe a page, so I need to do some pen pal exercises to get it back to my high school, hand-written essay test glory. It starts all fun and bubbly and neat and then rapidly devolves into just a mess of tilted lines that is either a mix of cursive and all-caps lettering or a Rorschach test. (I see a technology-hooked woman!)

In honor of today's events, Twitter has taken up the hashtag #NationalHandwritingDay and us bookish folks have used it as an opportunity to look at both our favorite authors' handwriting and our favorite book quotes in our own diverse handwriting.

You guys, I am so attracted to F. Scott Fitzgerald's handwriting I would have married him at first love letter purely for the penmanship. Which, I'm told, is not a good reason for a lifelong commitment.

Tolstoy, on the other hand, writes like a straight-up psychopath. I'm not saying he was one, but come on now. What even is that?

Roald Dahl has strangely delicate handwriting — except when he goes to town on those cross-outs — and it's not at all as bubbly and fun as I had imagined it would be.

Hermione, no surprise, gets an A+. Ron, you could really cool it on the loops.

Charles Darwin goes all classy with calligraphy for The Origin of Species.

Jorge Luis Borges' handwriting looks like one of those available fonts that you never use.

But just because you aren't famous (yet) doesn't mean you can't try your hand at writing out favorite lit quotations — see what I did there?

Sigh, I wish my handwriting was more swoopy, like this. It does Atwood justice.

This one is chock-full of penmanship personality.

I think this one was written with a Sharpie.

Through my decades of research (meaning: casual observation) I've found that all dads write in only capital letters.

So what's stopping you from showing off your pen skills? Write in block letters, write in cursive, write with your opposite hand, just write because it's important to keep flexing those muscles just as much as your texting thumbs. You know, just in case of the apocalypse or something.