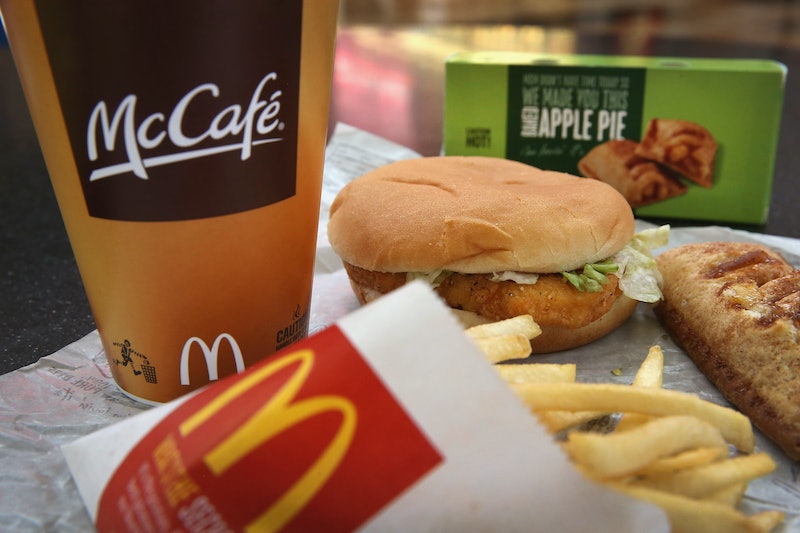 It seems one fast-food giant has bitten off more than its customers can chew. If you're an avid McDonald's eater, well, first of all maybe you should stop that, but secondly, some of your favorite items might disappear soon. In an effort to make ordering more efficient, McDonald's is simplifying its menu, which grew to a vast 72 items last year, excluding desserts, beverages, and combo meals. The chain is hoping that cutting back the number of menu items will also reduce confusion for both the customer and the kitchen. At least six items are getting the axe, so hurry to your local McDonald's before they go the way of the McPizza.

In the last four years, the number of food options at McDonald's grew by almost 20 items, and McDonald's franchise owners and managers say it's contributed to slowing down service and wait times. Employees witnessed confusion in both the customer, who would often be overwhelmed by all the choices, and the staff, who struggled to get orders straight and make the wide range of foods fast enough. One Midwest franchise executive, who spoke anonymously, told CNBC:

McDonald's is planning these cutbacks right as it's rolling out its new self-ordering Create Your Taste kiosks to compete with the customizable offerings at chains like Chipotle. If you ask me, giving people the option of making their own burger and checking out on their own is probably going to cause way more confusion and slower wait times than a few extra items ever did. But we've yet to see how these build-your-own systems will affect chains on a wide scale.

So without further ado, which items are about to become extinct in the land of the Golden Arches?

Ahh, the Snack Wrap. It was McDonald's solution for when you're not that hungry but you just want a few bites of your friend's sandwich. The Snack Wrap is exactly the same size as those few bites, and it won't annoy your friend.

Look at how sad that piece of chicken looks just resting there nestled between a warmish wrap on a bed of shredded lettuce. It's saying, "Eat me before they kill me and my kind."

I've never had one of these before, and most likely wouldn't have, but that's not the point. The point is that I'd like to choose — not be forced — to never eat this sandwich.

I'm no McDonald's burger expert, but this seems like a pretty popular choice, no? Bacon, cheese, a quarter-pound of meat. What's not to love? Why not get rid of this weird burger with chips on it instead?

Mmm fried chicken and bacon between bread. That's the American dream right there, isn't it?

Isn't this the same sandwich as the last one?