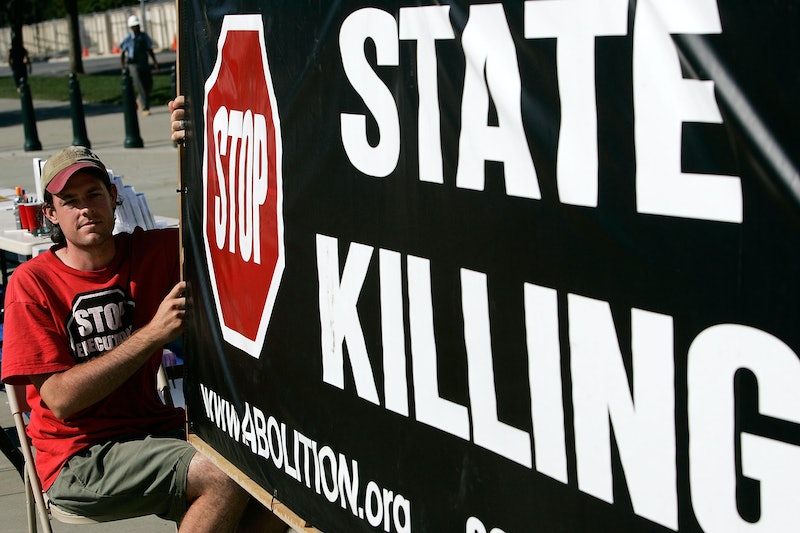 Following a number of high-profile cases involving controversial death-row inmates, the Supreme Court has decided to weigh in on the use of lethal injections and whether such practices violate the Constitution's measures against cruel and unusual punishment. The decision to review the procedure marks the first time the high court has addressed the issue since 2008, when it unilaterally denied a challenge to the practice. Now, however, following a single-line issue published late Friday afternoon, the Roberts Court has agreed to hear a case brought forward by three inmates awaiting execution who say the lethal dosage of drugs is unconstitutional.

The time is right for the Court to take a careful look at this important issue, particularly given the bungled executions that have occurred since states started using these novel and experimental drugs protocols.

He refers to the controversial execution of convicted murderer Clayton Lockett, whose allegedly painful and inhumane execution brought into question the legality and humanity of the lethal injection procedure. Since then, however, the state has put to death convicted child rapist and killer Charles Warner without any claim of foul play. Still, some lawyers say, the usage of the fatal combination of drugs can be excruciating, especially if used in the wrong order.

In an earlier challenge presented by Oklahoma defense attorneys, NBC News reports, naysayers of the penalty and the lethal injection have noted:

There is a well-established scientific consensus that it cannot maintain a deep, coma-like unconsciousness. For these reasons, it is uncontested that midazolam is not approved by the FDA for use as general anesthesia and is never used as the sole anesthetic for painful surgical procedures.

According to these lawyers, their clients are acutely aware of intense pain during their final moments, making the entire procedure entirely unacceptable under the Constitution's Bill of Rights. Attorneys have further claimed:

The lethal injection landscape has changed significantly since Baze v. Rees in 2008. At that time, every state was using the same three-drug combination, which the lawyers in Baze conceded was humane if administered properly. Today, states are not using that 3-drug protocol and instead are using experimental drug combinations. The drug protocol used in Oklahoma is not capable of producing a humane execution, even if it is administered properly.

The Supreme Court is expected to come to a conclusion on the issue by late June at the latest after hearing the case in April. A number of the Court's more liberal justices, including Ruth Bader Ginsburg, Stephen Breyer, Sonia Sotomayor, and Elena Kagan, have previously expressed reservations about the current policies in place regarding lethal injection executions. Following a recent decision to ignore a similar petition from an inmate in Missouri, Justice Sotomayor remarked,

The questions before us are especially important now, given states' increasing reliance on new and scientifically untested methods of execution. Petitioners have committed horrific crimes and should be punished. But the Eighth Amendment guarantees that no one should be subjected to an execution that causes searing, unnecessary pain before death. I hope that our failure to act today does not portend our unwillingness to consider these questions.

Now, these considerations are more salient than ever as the entire court prepares to hear a case that has the capacity to change the entire landscape of capital punishment in the United States. In the coming weeks, the scheduled executions of a number of death row inmates will be stayed while the Court begins to weigh arguments and evidence pertaining to the issue.

Many of the issues that have recently arisen around the drugs used in lethal injections followed the boycott of a number of European companies who refused to provide the necessary sedatives that, ostensibly, make the procedure more painless and humane. The United States, which remains one of the few "developed nations" that still makes use of the death penalty, has come under significant fire by other nations for the seemingly antiquated capital punishment system. Still, executions continue to happen by state jurisdictions, and in the states of Oklahoma, Florida, Ohio, and Arizona, the same apparently ineffective pain killer is used as the first of the three injections. Ohio, however, has announced that is will halt all executions until a superior alternative can be found.