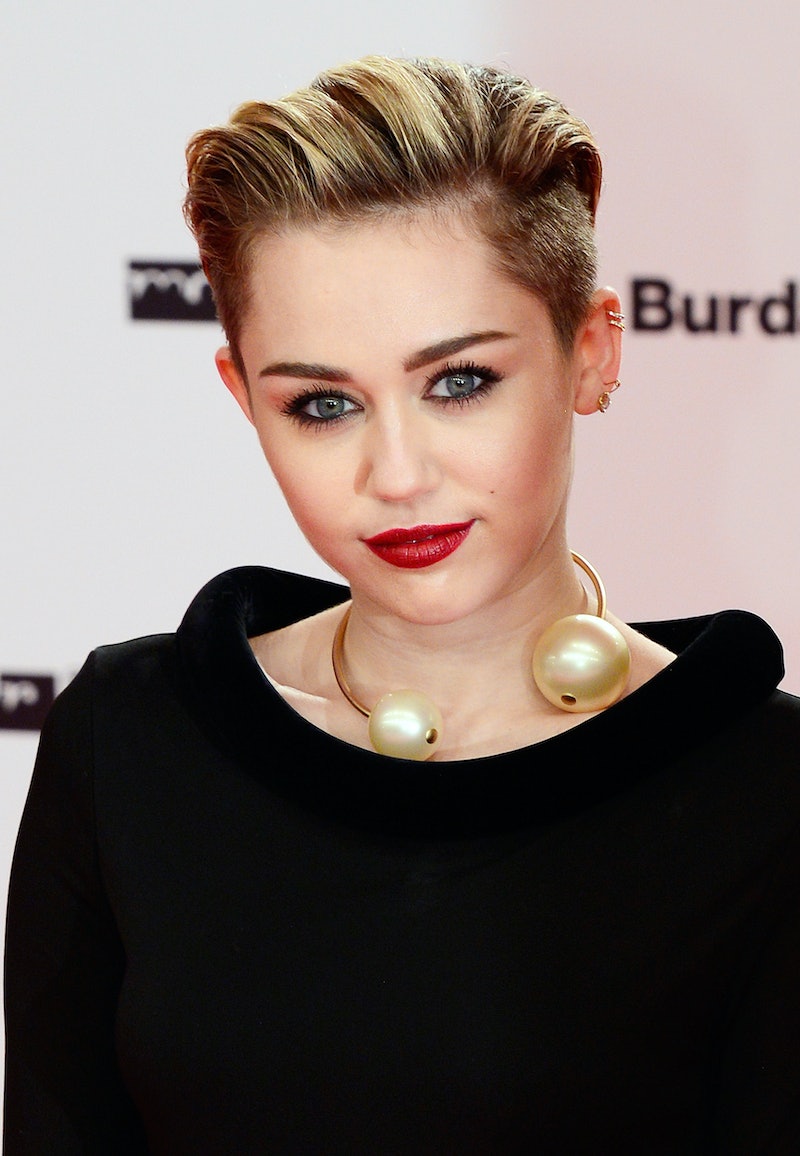 Guys, this is not a drill: Miley Cyrus was asked about the possibility of a Hannah Montana reunion, and she, amazingly, didn't immediately shoot down the idea. Of course, on my wish list of Disney Channel reunion shows, obviously Lizzie McGuire and Even Stevens are the priorities — but, that said, I totally wouldn't hate seeing the Hannah Montana cast get back together as grown-ups, especially now that Miley's rockin' a new look. In a recent interview with E!, Cyrus admitted that she definitely wouldn't hate becoming Miley Stewart again... especially if the reunion conformed to her very specific idea.

"I don't know, only if she, like, has an alter ego and is actually me," Miley said. "Reverse it all the way around...That would be fun. People would want to see it. Everybody loves a reunion."

OK, first of all, I love this. Miley Stewart is actually Hannah Montana who is actually Miley Cyrus — that's a crazy plot twist worthy of the ages! It has movie potential, in fact, because I know all kinds of people who would line up at the theater to actually see this happen. Get started on it, Miley! We're all begging you!

However, if it does happen, there are a lot of questions I'm going to need the answer to during the reunion — you know, other than how Hannah Montana turned into Miley Cyrus, because that would obviously be the big one.

Fingers crossed the reunion actually happens so Disney Channel has the opportunity to answer these burning, important questions.

Did Miley actually stay in college?

The series ended when Miley appeared in Lilly's dorm room as her new roommate, so, obviously, I have to know if they ended up graduating from college, or if Miley took the easy way out and decided to be the pop star she actually is. You know, instead of dealing with things like the financial aid department and studying for finals... because that's what I would have done. No shame.

Lilly and Oliver were an adorable couple. I don't care what you think.

Did Robbie Ray ever get a life?

Last I checked, the only items on Robbie Ray's to do list were:

a) Be way too interested in the teenage gossip, and,

b) Hang around his Malibu beach house, doing basically nothing.

Why do I feel like he was also spending all of his daughter's money that she earned being a secret pop star? Really, I feel like a dramatic court case would definitely have to be part of this reunion.

Did Rico grow up to be a hipster like the actor who played him?