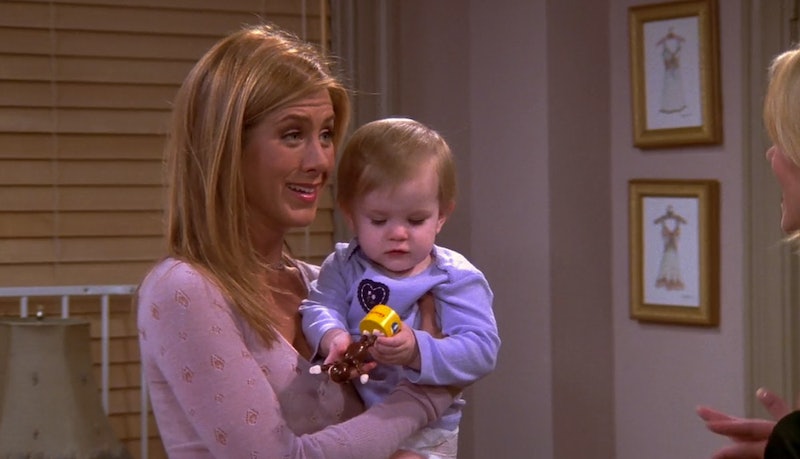 "A lot of people in our school watch it, and most of them know we were in it, so they think that's pretty cool," Noelle Sheldon casually tells me, as if it's no big deal to have been a part of Friends, one of the biggest TV shows in history. Noelle and identical twin sister Cali Sheldon played the adorable Emma Geller-Green, Rachel and Ross' daughter who showed up in the middle of Season 9. They tag-teamed the part of the most recognized baby of the early '00s, and while the girls, now 12, don't remember their time on the series — as Cali says, "I don't remember anything about being on the show, but I've seen the pictures" — they do agree having Jennifer Aniston as their TV mom is pretty remarkable.

"She's so famous, and I'm just a regular person, so it's really cool," says Noelle. Cali goes on to add that she's often told people that Aniston is her mom, something she says "isn't completely lying!" Their real mother, Gretchen Carpenter, remarks that Aniston was equally as cool offscreen, as was the rest of the cast. "Everyone was really, really nice to Noelle and Cali, and treated them like little princesses on the set. [Friends] filmed before a live audience, and Cali and Noelle would come out, and they would be waving and engaging with the live audience. It was a lot of fun."

And though Cali and Noelle were a little too young to enjoy some of the perks, Gretchen does admit one awesome thing about being involved on the show. "My husband and I got to go to the Friends cast parties, which was pretty cool." What happened at those parties, though, will stay with Gretchen.

You might think that Noelle and Cali are Friends experts, having stayed up late to binge-watch the series, but that's not the case. "Actually, I've never watched the show because my mom hasn't let me yet," says Noelle. Naturally, I was surprised — until I remember just how PG-13 Friends can get. (Princess Leia fantasy episode, anyone?!) Gretchen says, "[The girls have] seen portions that they are in, but I haven't let them watch the whole series." But the girls may not have to wait very long to tune into the series — according to Gretchen, she'll give them permission "when the girls turn 13." They turn 13 in June, which gives them all of summer vacation to take it all in on Netflix.

Even though they haven't seen a full episode, Cali does have a favorite moment. It's from a clip that she watched of her sister's time on the show. "When Noelle was in a baby swing and they were pushing her, they made some joke that she didn't understand but she still laughed. I thought that was really cute."

Though the girls have pursued acting — and they live in Los Angeles, struggling child actor capitol of the world — it's more of a hobby than a career. "I've been involved in [films] for college students, which is what I do sometimes now," says Noelle. According to Gretchen, "Our girls go to a normal school, and they go on auditions once in a while, but we don't make it our top priority.... [Cali and Noelle's acting] has happened organically. It wasn't a conscious effort to make sure that this doesn't take over our lives, but had it ever gotten to that point, we probably would have."

That's not to say the girls can't have fun with it. Much like they did with Friends, the girls have shared roles. As Cali explains, "We've done several different plays, but we're usually [not acting together because] we're cast in the same part. We were recently in The Little Mermaid, but we were in a separate [cast] and both [acted the part of] Flounder." But if they don't get a role, it's not the biggest deal. "I'm not very competitive because you usually don't get the roles, and if you do, it's cool, but if you don't it's nothing to be sad about, because the person who got it is going to do great," says Cali. It is single-handedly the most mature take on the process I have ever heard.

So what do they do instead of acting? Try everything. "I like basketball, softball, Science Olympiads, and I like to draw and write," says Cali. Noelle is equally as busy. "I play the trumpet, [play] softball, and I do Science Olympiads. I also like to cook and hang out with friends," explains the twin. Maybe the reason why Cali isn't stressed about a future acting career is because she has big (and very specific) dreams on the horizon. "First I want to go to UCLA and get a degree in biochemistry so I can become a chemist and cure cancer. Then I want to petition for women to be allowed into a football league. Then I'm going to write a book." Noelle's dream is a little bit different — and perhaps inspired by her TV mom, Rachel Green.