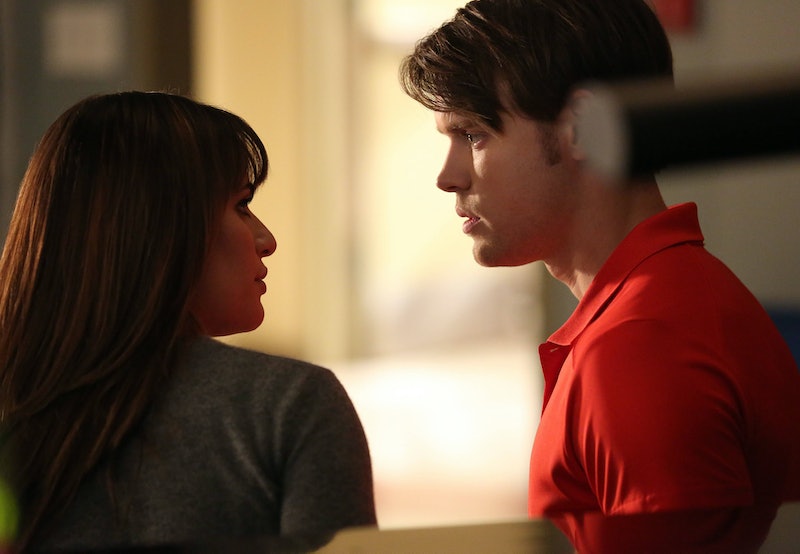 I always expected that if Rachel Berry were to ever have a love interest again on Glee, that the situation would be told in a classy matter out of respect for both Finn and the late Cory Monteith. However, the first person Rachel shared a kiss with since the death of her first love was Sam thanks to some majorly evil deception by Sue Sylvester. Rachel and Sam shared a kiss after spending some quality time together taking piano lessons from Blaine and bonding over still being in love with their first loves. But the entire love story began because Sue hypnotized Sam in an attempt to break Rachel's heart and destroy the glee club. After the kiss, Sam immediately forgot about their adorable chemistry leaving Rachel upset, yet she kept it together. But as Sue's plans to take down Rachel continues, could Sam and Rachel fall for each other for real?

Before we talk about this strange but possible romance, I have to bring up something important that caused me a little outrage on Friday night. I've always understood Sue Sylvester, despite her irrational anger and hatred of most things and her many crazy moments. But her attempt to break Rachel's heart just because she's angry that the glee club is restarting is cruel, especially considering she knew how much Rachel loved Finn and she must have been affected by his death despite never really warming up to him much.

So let's get to real question that we're all probably wondering: Could a Rachel and Sam romance work? Or does it all feel too... strange and incestuous. True all of the glee club's many pairings all feel a bit incestuous if you think about it (except for probably Rachel and Finn since they were the original romance on the series), but somehow we are usually able to handle most of the relationships like Santana and Brittany who were romancing each other well before they joined the New Directions.

The pairing makes sense in some ways. Both Sam and Rachel have had their hearts broken, in different ways obviously. Both have come back to their high school alma mater to take on roles they might have expected to take, especially in Rachel's case. And most importantly, they're both learning more about themselves in this process of returning home. They could be great together as they discover their new identities. Or they could be terrible for each other since they have so much to still figure out individually.

Personally, I think it's a good idea for Rachel to start thinking about romance again, even if it doesn't happen right away. But to jump into something so quickly with Sam even though they've been friends for a while seems a little reckless. Obviously the couple was brought together through deception, but they've always had a great connection, a sort of chemistry that was always so sweet and loving. Could that chemistry be more than just genuine friendship?

I hope these two can talk things out in "The Hurt Locker, Part 2," get to the bottom of the hypnotism nonsense, and not just try to blow past their possible romantic connection just because Sue is hellbent on destroying Rachel in every way. I'm really interested to see what could happen between Rachel and Sam because I actually believe they could work together. And I hope that the potential relationship is handled in the same way their friendship has been handled throughout the series, with compassion and respect for every person involved.