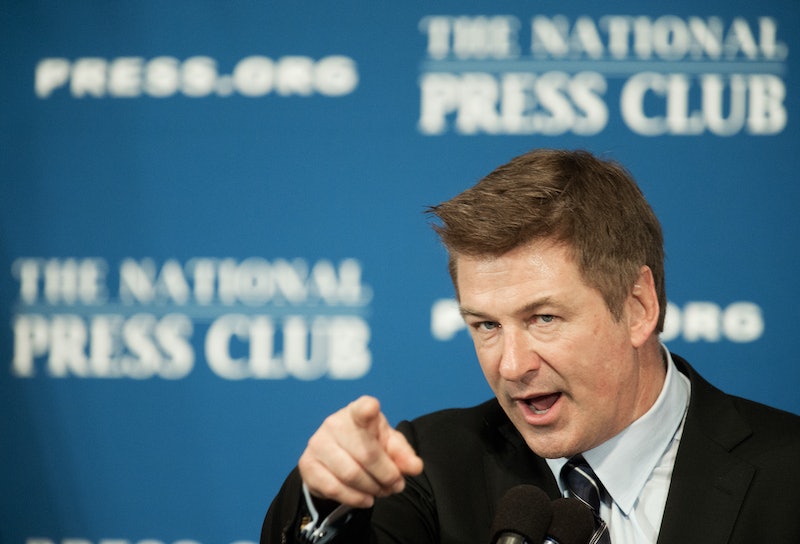 If you’re curious about how it feels to frisk a papparazzo, take on Anderson Cooper via Twitter war, or hang out with Tina Fey, you are in luck. Because Alec Baldwin is writing his memoirs — entitled Nevertheless — to be released by Harper in 2016. And like Clarissa, he’s going to explain it all.

The book will take an all-inclusive look at Baldwin’s life from his Long Island childhood to the set of 30 Rock, and everything in between. We can but hope that he’ll address at least some of the many scandals in his past: Calling his daughter a pig. The numerous homophobic rants on Twitter. And then who could forget his one-man war on all paparazzi?

Baldwin began his career on the soap opera, The Doctors, but is known best for his performances in The Hunt For Red October, Glengarry Glen Ross, and (my personal favorite Baldwin performance) Working Girl. Today, he's the host of NPR’s Here’s the Thing. According to HarperCollins publisher Jonathan Burnham, Baldwin will tell all. He told The Associated Press;

"In this memoir he writes about his family, lovers, friends and enemies, confronts his former demons, relives the highs and lows of his career, and opens up in an unflinchingly honest way about his life and times. This memoir will be funny, occasionally combative, often moving and an unbelievably good read."

Combative is not hard to believe.

This is not Alec Baldwin’s first foray with a pen. Ex-husband of actress Kim Basinger, Baldwin wrote about divorce in his 2008 book, A Promise to Ourselves: A Journey Through Fatherhood and Divorce. According to HarperCollins, Baldwin is flying solo and will not be working with a ghostwriter or co-author.