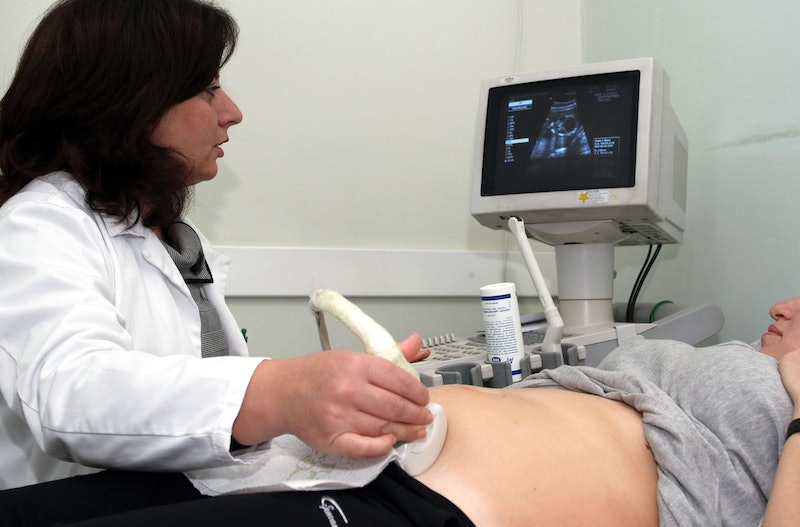 After replacing a harsh 20-week abortion restriction with an all-encompassing ban on federal funding for abortion, House Republicans introduced yet another anti-abortion bill on Thursday, because the legislating of women's bodies won't stop, can't stop. Republican Congress members now want to mandate ultrasounds before abortions, despite the fact that some federal courts have ruled forced ultrasounds unconstitutional.

Rep. Jeff Duncan (R-S.C.) sneakily proposed the mandatory ultrasound bill, HR 492, on the 42 anniversary of Roe v. Wade while thousands of anti-abortion protesters marched nearby. The bill would not only make forced ultrasounds federal law, but also mandate that women have "the opportunity to review the ultrasound before giving informed consent to receive an abortion."

HR 492 is co-sponsored by 10 Republican male representatives. No female representative has yet to endorse the mandate. After this week's schism of the sexes in the Republican Party, with female Republican Congress members jumping ship from the 20-week abortion ban because they believed the rape clause was "too extreme," it will be interesting to see how many women throw their support behind this new women-centric yet male-dominated bill.

Nearly half of all states have mandated ultrasound laws on the books, but that doesn't mean the practice is without controversy. Although many abortion providers already conduct ultrasounds prior to abortion, medical associations such as the American Congress of Obstetricians and Gynecologists have repeatedly denounced mandated ultrasound laws as unnecessary and bureaucratic measures that impede on a patient's privacy.

But what has made mandated ultrasound laws so controversial is the caveat the often comes with them. According to the Guttmacher Institute, abortion providers in three states — Louisiana, Texas and Wisconsin — must show and describe the ultrasound to the patient. In the majority of other states with ultrasound laws, the abortion provider must at least offer the opportunity for the patient to either see, hear, or have a physical copy of the image.

But there's some good news: The contentious measure has been continually struck down by federal courts. Just last month, the 4th Circuit Court of Appeals ruled that North Carolina's ultrasound law, which required the physician to describe the ultrasound image to the patient, was unconstitutional because it violated free speech. Judge J. Harvie Wilkinson III, writing for the court's three-judge panel, said the law used "compelled speech" to dissuade women:

The state freely admits that the purpose and anticipated effect ... is to convince women seeking abortions to change their minds or reassess their decisions. ... The state cannot commandeer the doctor-patient relationship to compel a physician to express its preference to the patient.

In 2012, the Oklahoma State Supreme Court also struck down the state's coercive ultrasound law, which forced women to look at the image and required the abortion provider to read a state-sponsored script.

And among state legislatures, the once-popular anti-abortion measure is having trouble. In 2014, the Virginia Senate voted to repeal its maligned, forced transvaginal ultrasound law, which may have been the most infamous of the ultrasound laws, with many activists and doctors decrying it as "state rape."