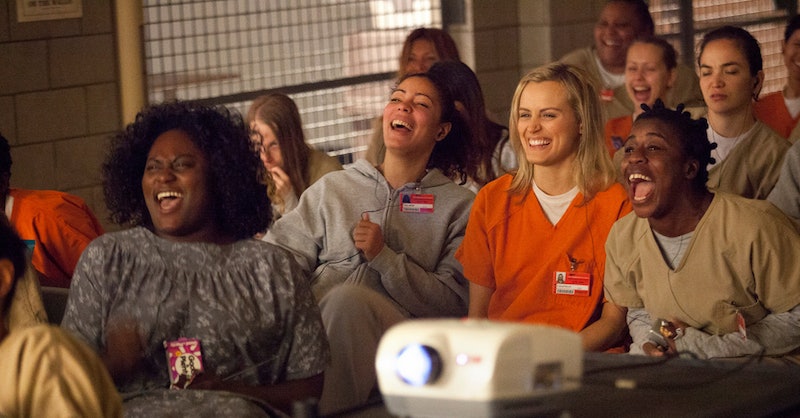 If you're anything like me, you probably can't for wait for Netflix's Orange is the New Black to return, and you've maybe even already set aside two whole days for some serious binge-watching when the new season is finally released. Well, if you're out of new OINTB material to keep you sated until then (you poor thing!), then oh boy, do I have a special treat for you: Just watch everything on Piper Chapman's Netflix "recently watched" list!

That's right: During another one of my days as a crazy social butterfly, I discovered that "Recently Watched by Piper Chapman" is an actual Netflix film category.

Maybe I'm just slow to the party and never noticed it before, since a quick Google search identifies that it's been a feature since at least mid-November and has been right under our noses this whole time. But, in case you're like me and you missed it (and let's face it, most of us are too focused on Friends these days to notice other categories), you need to immediately check out what she's been recently watching. There's lots of expected prison flicks, as well as some girl-on-girl action, but some of the films actually make specific reference to plots in Orange is the New Black. And the best part? They're all available on instant stream!

I took note of each film before the category unceremoniously disappeared from my feed, and made all the relevant ties to the show for you. Rumor is there's an Alex Vause version, but I'm hoping to see one for Taystee (which should include just Harry Potter films, because priorities).

Until then, though, here's what's currently on Piper Chapman's Netflix account.

Netflix Description: "Relentlessly abused by her stepfather, Anna is ultimately driven to kill him and lands at a dangerously sadistic juvenile detention center."

Reasoning: A good-girl-gone-bad theme set against a correctional facility? Of course Piper would be on board.

Reasoning: Well, description aside, I'm sure the fact that Ione Skye is in it doesn't hurt. Listen, I typically dig men, but if I was incarcerated with Diane Court, I'd be willing to re-think that stance.

Netflix Description: "First-time director Karyn Kusama's powerful film tells the story of Diana (Michelle Rodriguez), a Brooklyn high-schooler who gets little support from her dismissive single father and takes her frustrations out on her classmates. But when she wanders into a local boxing gym, she's instantly drawn to the action. And though it's a male-dominated world, boxing provides her a newfound discipline and sense of purpose, as well as a positive male role model."

Reason for Watching: I don't remember any of the inmates being really into boxing, so most likely this just resurrects fond memories of beating up Pennsatucky in the snow.

Netflix Description: "Emmy winner Bryan Cranston stars as Walter White, a high school science teacher who learns that he has terminal lung cancer and teams with a former student to manufacture and sell high-quality crystal meth to secure his family's future."

Reasoning: Morally ambiguous, involved in drug trade, and bespeckled? Walter White is just a cat-eye away from being Alex Vause.

The Girl Who Played with Fire

Netflix Description: "In this comedy of errors, soon-to-be father Mel Coplin sets out to find his birth parents, accompanied by his wife and sexy female adoption agent. Their quest becomes even more anarchic once drug dealers and a pair of gay FBI agents get involved."

Reasoning: The movie features a Nice Jewish Boy and his WASPy blonde wife, and I'm just going to leave it at that.

Netflix Description: "Director Amy Heckerling's fresh adaptation of Jane Austen's novel Emma follows the misadventures of meddlesome Beverly Hills high schooler Cher, who gets more than she bargained for when she gives a fashion-challenged student a makeover."

Reasoning: It's a perfect film? And let's face it, when privileged Piper enters Litchfield, she was so totally clueless.

Reasoning: Rebellious girls on the run, making trouble and making out? It brings Piper back to a simpler time.

Netflix Description: "A prison psychiatrist prepares six female inmates for parole by granting them a weekend furlough, during which each of them has a sexual encounter."

Reasoning: It's rated NC-17. Fill in the blanks.

Netflix Description: "What happens when three sets of BFFs become enemies? Follow the stories of a group of classmates who navigate the ups and downs of friendship."

Oggy and the Cockroaches

Netflix Description: "Wimpy blue cat Oggy would like nothing more than to snooze, but he's constantly bothered by the three ugly cockroaches who have invaded his home."

Reasoning: It's an homage to that beautiful method of trading cigarettes.

Netflix Description: "Facing mortal peril, Rocky the rooster and Ginger the hen decide to rebel against evil farmers Mr. and Ms. Tweedy and lead their fellow chickens in a great escape from the farm where they are being held captive."

Reasoning: BECAUSE OF THE MYTHICAL FENCE-HOPPING CHICKEN, DUH!

Netflix Description: "Newly widowed Julianne Wakefield uncovers disturbing secrets about her husband's past, leading to the shocking discovery that he isn't really dead."

Netflix Description: "This documentary highlights four cases in which whistleblowers exposed government wrongdoing to the media and faced serious repercussions."

Reasoning: Specifically, I'm not sure, but "serious repercussions" are something Piper's familiar with.

Netflix Description: An American student studying in a small French village uncovers a dark secret when she learns that the parents in her host family have disappeared.

Reasoning: Centered around a love triangle, with a title Piper would take to heart.