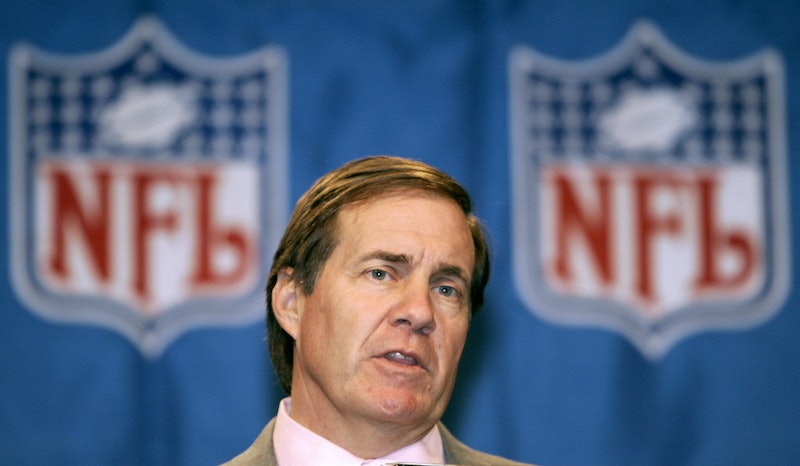 In exactly eight days, the New England Patriots and Seattle Seahawks will be taking to the field to compete for an NFL championship, the pinnacle of excitement, achievement and drama possible in the sport. And yet, for the past week, both sports and mainstream media have been obsessed with a story that has nothing to do with go routes or the offensive line — accusations that the Patriots have cheated through the use of partially deflated footballs. Saturday, the Patriots held a surprise press conference on DeflateGate, and when it was all said and done, it probably left more questions than answers.

Standing in front of a throng of assembled media at Gillette Stadium in Foxboro, Massachusetts, Patriots head coach Bill Belichick spoke for nearly 30 minutes on the scandal, which has virtually derailed all other coverage of his team, and indeed, the big game to come. And the tone of the conference, contrary to Belichick's reputation — he's widely known as one of the most terse, curmudgeonly personalities in the NFL's coaching ranks — was expansive, measured, and frankly, kind of meandering.

But sadly, the core question of how the Patriots footballs (11 out of 12 of them tested by the NFL after Sunday's AFC championship game against the Indianapolis Colts, mind you) turned up almost two pounds of PSI under-inflated is still profoundly unclear.

Belichick essentially denied any direct or deliberate wrongdoing on the part of his players, himself, and the team's staff, as detailed by Deadspin, suggesting instead that climatic conditions resulted in the balls' loss of PSI. While strenuously reminding the press that he's "not a scientist," a line awkwardly reminiscent of Republican climate change denialists over the last year, he likened his best guess at the cause to a car's tires losing pressure overnight due to low temperatures. Of course, this raises maybe the most predictable retort imaginable — why weren't the Colts' balls ravaged by the weather, too?

Now, we all know that air pressure is a function of the atmospheric conditions. It's a function of that. ... it's similar to the concept of when you get into your car and the light comes on, and it says low tire pressure because the car's been sitting in the driveway, outside, overnight, and you start it up, drive, and the light goes off. It's a similar concept to that. So atmospheric conditions and true equilibrium of the ball is critical to the measurement. At no time were any of the footballs prepared anywhere other than in the locker room or in an area close to that. Never in a heated room or heated condition. That's absolutely never taken place to anyone's knowledge or recollection, and I mean, that's just, didn't happen.

Belichick confessed to being "embarassed" at how much time he'd spent researching the nature of football inflation and air pressure over the last week, a fact which the sports media is undoubtedly going to have a field day with should the Patriots lose to the Seahawks next week. In advance of the Super Bowl, coaches and players are almost uniformly expected to toe the company line, and claim they're 100 percent, tunnel-vision focused on the task at hand. Belichick refused to detail exactly how much time he's devoted to mitigating this scandal, saying he "didn't log it."

Essentially, what you take away from Belichick's performance comes down to your trust in him, and your intuition about his levels of openness and honesty, qualities that the Patriots organization has often been accused of skirting. It was the Patriots and Belichick who were embroiled in the infamous "Spygate" scandal in 2007, when they were caught covertly videotaping opponents' practices. Since the Spygate scandal, they've made it to two Super Bowls, but have lost both.

Whether people believe Belichick or not, however, the decision to get out ahead with this presser before the team departs to Arizona (the Super Bowl is held at rotating, neutral-site stadiums) is a smart one. Now, whenever somebody tries to ask Belichick about this during the fracas of Super Bowl media week, he can simply refer people to his prior remarks.