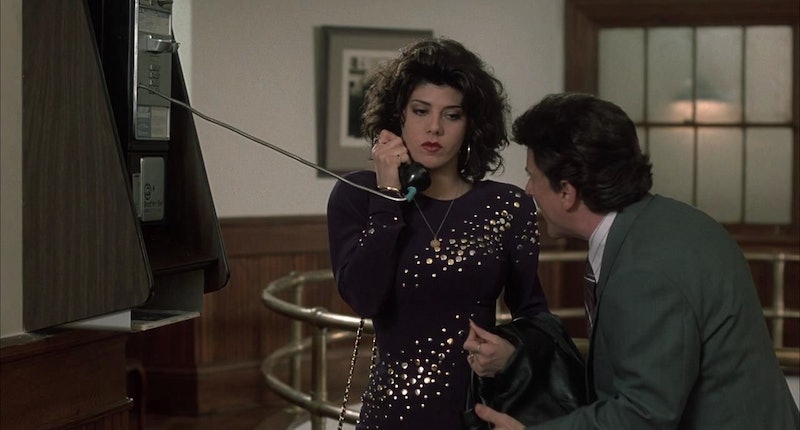 How does one officially deem a movie to be a classic? Aside from the endless collection of professional critiques and spots on choosy best-of lists that lump them into that coveted category, here's another surefire way to find out: If a movie that's a couple decades old still manages to make its way into major headlines, it has some serious clout. And, if an NFL coach randomly mentions it during a press conference? It's a certified shoo-in. This is exactly what happened during a presser on Saturday, when New England Patriots coach Bill Belichick dropped a My Cousin Vinny reference at seemingly the most random moment ever. Specifically, it happened when Belichick was attempting to explain how balls are prepped for game day — he stated first that he's "not a scientist. I’m not an expert in football measurements," before referencing the film and stating, "I'm no Mona Lisa Vito."

So, when pop culture meets sports, it's already a rather strange thing to see — but I imagine it's even stranger for anyone who has no clue about who Mona Lisa Vito actually is.

So, for reference, here's the deal: Marisa Tomei won an Academy Award for Best Supporting Actress for her portrayal of Mona Lisa Vito, the feisty fiancée of personal injury lawyer Vinny (Joe Pesci), who sets out to prove that his inexperience and incompetence won't keep him from successfully defending his two cousins that were wrongfully charged with murder. (Spoiler alert, they actually stole a can of tuna, but whatevs...)

Just to give you a little more background on Mona Lisa Vito, let's start with the basics:

Because seriously, how dare you not know who Mona Lisa Vito is?

That's Because She Had a Major Attitude

And a serious potty mouth to go along with it.

She Would Totally Have Your Back

Who wouldn't want to have a chick like this on their side?

Everyone In Her Family Is A Mechanic

Don't let her looks fool you. She worked at her father's garage and didn't need anyone's help changing a flat tire, thankyouverymuch.

She Was Pretty Damn Good At Her Job

And her expert testimony played a pivotal role in sealing Vinny's court victory, which is exactly why Belichick referenced the line: He was stating that his knowledge on the subject did not compare to Mona Lisa Vito's mechanical knowledge.

So, there you have it: Mona Lisa Vito 101. Now, if you'll excuse me, a My Cousin Vinny rewatch is definitely in order after this.