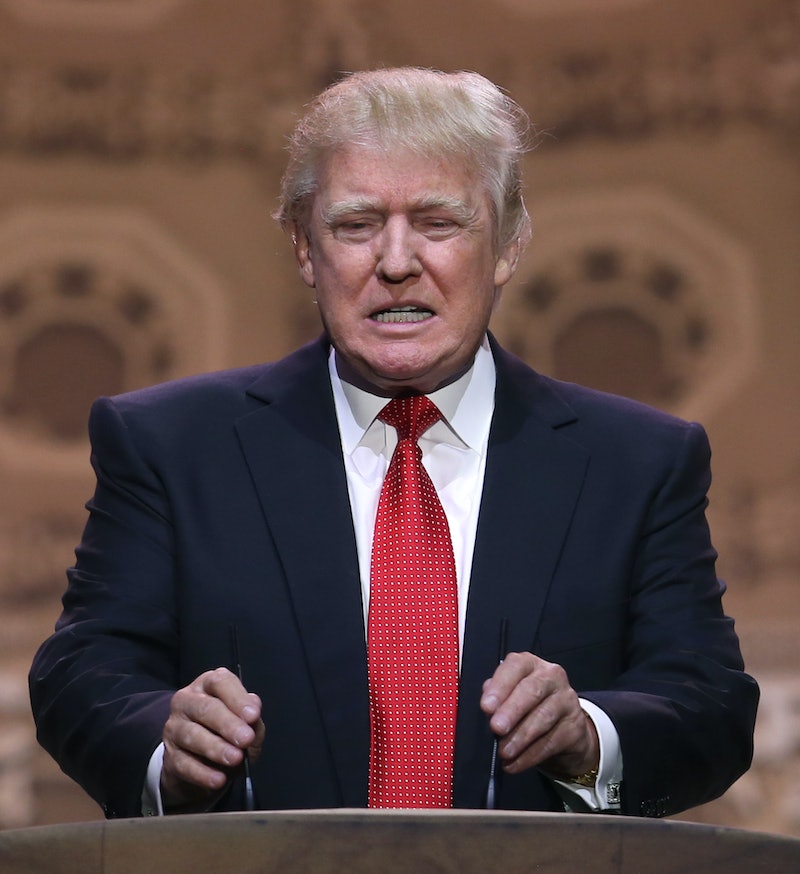 Don't look now, but America's favorite election-season huckster is back, and he's trying to pull the same old con all over again — magnate and reality TV personality Donald Trump says Mitt Romney "choked" in 2012, and that he absolutely, positively shouldn't be the Republican nominee again in 2016. Who would Trump prefer? Why himself, of course. And never fear, because he's "strongly inclined" to mount his own presidential run! Can't you see the campaign merchandise already?

Well, you should cool your jets, because he's probably lying — in this writer's humble opinion, at least. If anything's been laid painfully, thoroughly bare in the last several years, it's that there's no reason to take him at his word about this. He's done this song and dance before, as ABC News notes, teasing presidential runs in 1988, 2000, 2004, 2008 and 2012, all of which never materialized into anything even remotely serious or legitimate. The closest he ever came was likely in 2012, when he was invested enough to indulge in disgraceful, discrediting conspiracy-mongering about President Obama's citizenship.

Speaking before the Iowa Freedom Summit on Saturday, Trump insisted that both Romney and fellow GOP establishment darling Jeb Bush — neither of whom attended the event — would be presidential losers in 2016, hyping up the crowd with his unique brand of self-aggrandizing bravado.

I readily admit that I didn't vote for Mitt Romney in 2012, and it's as unlikely as anything that I would in 2016, so it's truly shocking to feel the need to defend him. But there's something about a career political pretender accusing someone who's earnestly run the gauntlet twice already a "choker" that doesn't sit quite right. I could just as easily say that Trump has "choked" each and every time the thought of running for president has crossed his mind — with all that money, that name recognition, and that alleged confidence in his abilities, what gives? What's the deal, Donald?

The reality, frankly, may be deeply cynical. As detailed in McKay Coppins' excellent profile in early 2014 (a must-read which sent the notoriously thin-skinned Trump into a full-blown temper tantrum, blasting the BuzzFeed reporter as "true garbage"), he seems to simply love the limelight, sincerity be damned. Obviously I'm not inside the man's head, so its impossible to say for certain, but his indulgence of birtherism somewhat suggests this — no credible presidential candidate would ever behave the way Trump did, boasting about his investigators in Hawaii digging up damning evidence about Obama's birth certificate. Incidentally, we never did hear about what those alleged investigators found. Funny, isn't it?

Basically, Donald Trump wants to play candidate again, and if we all have the requisite self-respect, we won't let him get away with it. When he wants to make it official, jump in the race, and start having to deal with the process like a real, committed adult, then maybe he'll get some of the dutiful coverage he clearly desires. But as long as he wants to sit back and gloat about what a great candidate he would be — essentially writing his own "Donald Trump for President" fanfiction, complete with himself lowering gas prices by cursing out OPEC — he ought to get little more than derisive smirks.