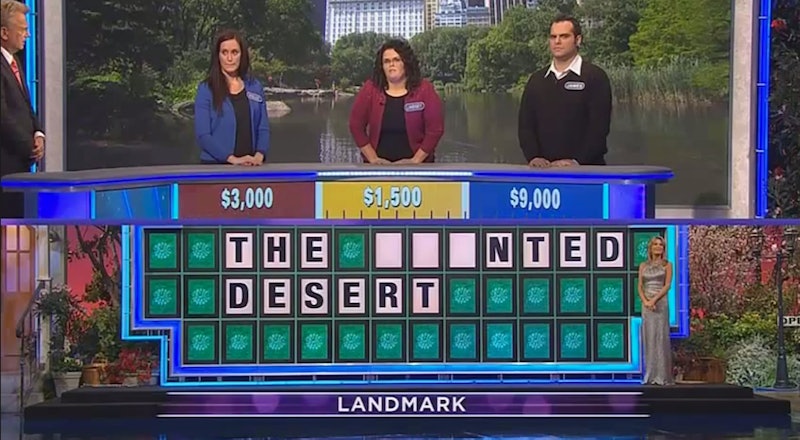 Pressure is a funny thing. The feeling can (and does) often hit at the worst possible times, and, no mistake — it happens to the very best of us. Unfortunately for this guy, though, it happened to him when he was on live television: Wheel Of Fortune contestant James managed to majorly buckle and fail under pressure on a recent episode of the game show and, as a result, he lost out on some major cash.

So, what happened? During a Toss-Up puzzle round in the game show, James and the other two contestants attempted to solve a puzzle in which the answer was the landmark "The Painted Desert," — which for anyone who is interested, is located in Arizona, and it's also totally beautiful. The contestant who tried to guess the puzzle before James couldn't quite figure out the puzzle, and attempted calling it "The Pointed Desert" — which, well, wrong guesses happen. But, when it came time for James to take the prize money (which was up to a whopping $9000 for him) all he had to do was change one vowel and the cash was all his.

Instead, James had one of the more unfortunate Wheel of Fortune fails in recent years.

James must have decided that "The Pointed Desert" had to be the right answer because, for some reason, he guessed it again — twice! — and then proceeded to get confused by the fact that he still had time to guess before the clock ran out. Somehow, amidst the pressure to win and to get quite a chunk of change, it was like he'd totally forgotten how to play the game.

But despite his poor performance, James still took home $1000 in the end (no, he did not make it to the final round) — and, if it makes him feel better, his major fail is hardly the most unfortunate showing in Wheel Of Fortune. No, guys, there are far worse fails in the history of this game show:

"Who Said Anything About A Horse?!"

I have to piggyback (or horsey-back?) on host Pat Sajak's reaction to this puzzle fail, because why did the contestants believe the puzzle had to do with a horse at all? Just because the two men made a wild, completely unjustified guess? There was only one letter on the board! Honestly, if I'd been at Sajak's job as long as he has been, I'd be out the door by the end of this round as well.

He Must Not Be A Beach Boys Fan

Oof. This one just hurts.

Everyone Should Know This Name

This one is less defendable since mostly everyone studied the story of the Trojan War at least once during school. Plus, this kid was clearly in college and probably took a test on Achilles, Hector and the Fall of Troy earlier that week at Indiana University. Step it up, dude.

Ollivander Would Be Ashamed

This guy probably hasn't read Harry Potter, or he would understand the importance of a wand. Ollivander would be ashamed.

Clearly this guy just didn't pay attention enough to even read the board properly. Either that, or he really wanted a Spider-related superhero to be Superman's partner in crime-fighting. This might actually be the worst fail, purely because it just doesn't make sense.