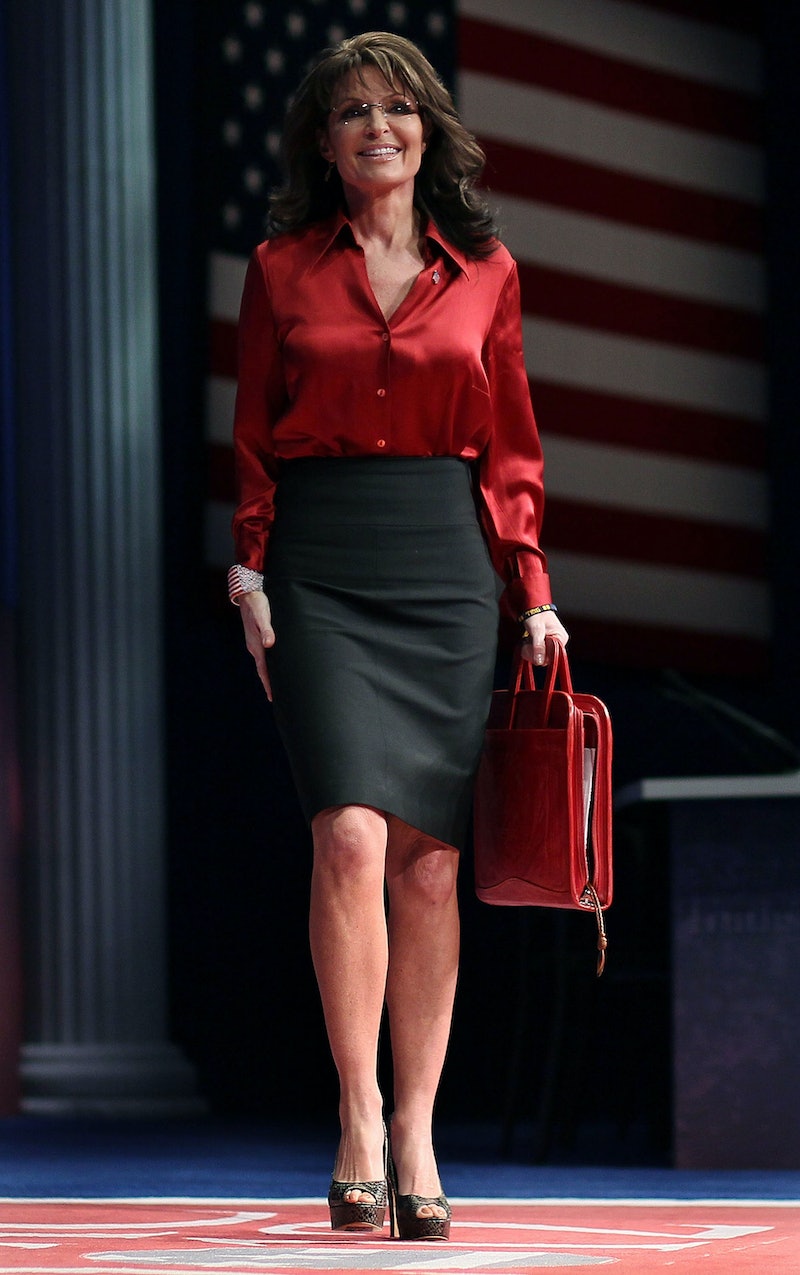 Well, that didn't go very well. In recent days, it's been revealed that former Alaska Governor and vice presidential nominee Sarah Palin is "seriously considering" a 2016 run at the White House. The news was widely met with curiosity and skepticism alike — she also talked up a potential 2012 run before bowing out — and seemed to signal a possible return to the political limelight for a woman who was once poised to shatter the executive branch's glass ceiling. But just hours later, there's been a setback: Sarah Palin's rambling speech at the Iowa Freedom Summit Saturday afternoon did not help her 2016 plans, and that's a fact.

Palin was introduced to the stage by Iowa Representative Steve King, who lauded her for "moving the political center to the right" throughout her time in the public spotlight. Unfortunately, what followed could be described as moving both the center and some on the right to bewilderment. Over the course of nearly 35 minutes on stage, Palin delivered an awkward and meandering speech, appearing thoroughly disorganized, and often fumbling her way through folksy anecdotes and anti-government barbs alike.

In short, she turned in the kind of performance that's not likely to rally anybody to her cause, conservative or otherwise, and in doing so validated perhaps the foremost concern about her — that she's simply not an adequate enough communicator to weather the storm of a presidential campaign.

Given the length of Palin's speech, any analysis I can offer will by necessity be summary, and like any awkward speech, there's no better way to feel it out than to actually watch it. But here are some highlights.

Really, in all honesty, I can't exactly do it justice just typing it out like this, you have to watch or listen to really get the full effect. Maybe slap it on your iPod before your next workout? Though I grant you that might be a harrowing idea— on top of cardio, how much syrupy, down-home wisecracking can one heart take?

The really important takeaway, however, both for Palin and for the assembled conservatives listening to her speak, is that the thrall she once maintained over Republican audiences seems to have dulled considerably. You can see it happen over the course of this speech in real time, in fact, whenever the camera pans over the crowd — initial excitement and robust applause slowly recedes as the speech drags on, turning into pensive stares, halfhearted clapping and awkward silence.

She did net a standing ovation at the end, so I grant you that it may have read worse on camera than in person, but how things come across on camera matters more for would-be politicians than anything else.

In short, it sort of feels like this whole scene may have left Palin in the dust. If there's anything that's true about national politics, it's that you never know how long your window will be open. And right now, Palin seems better suited to her online speaking gig than getting up in front of a crowd — as awkward as online response to Democratic Senator Elizabeth Warren is, imagine if it were happening in an actual, in-person debate.