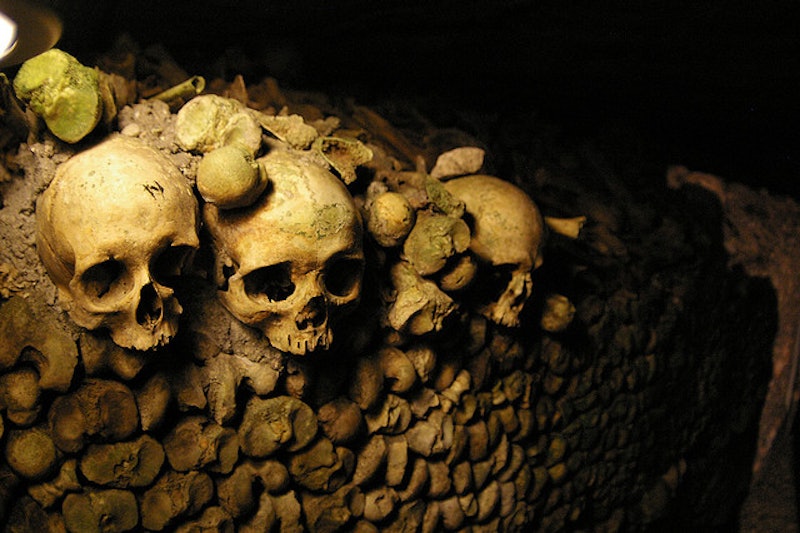 Anybody can take a vacation to somewhere exotic and peaceful. Anyone can travel to a white sandy beach and spend their days sipping on blended cocktails, watching the waves crash onto the beach, and soaking up a serious heap of UV rays. But doesn't that sound kind of meh — especially when you could be exploring one of these absolutely terrifying vacation destinations? Why spend your money and time on relaxation when you could be shrieking in terror at the sight of ghosts and broken doll heads, am I right?

There are several destinations around the world that are so f***ing scary, you'd think they were created as sets of horror films and then abandoned. But these spots were not made for movies. They certainly have the ability to inspire a horror flick or two, and haunt your dreams for weeks, but they were created by regular humans many years ago, usually following a tragic event, or resulting in tragedy and then left standing. These are the kinds of places you could see April Ludgate comparison shopping for a romantic getaway with Andy — that's how messed up they are. So, if you're looking for an unforgettable adventure that will leave you emotionally scarred and mentally baffled, check out these crap-your-pants terrifying vacation destinations. You will most definitely regret it.

Known as one of the most haunted buildings in the world, Leap Castle has not only had several tragic and bloody events occur within its walls, but it was also built on top of a torture pit. OH, and one of their resident spirits is called, The Elemental. *Cue chills and goosebumps.

So, you thought the island on LOST was scary with its Smoke Monster and constantly evolving magical powers? Well here's an island where you would never want to find yourself getting washed ashore. Why? Because it's filled with more than 4,000 snakes within its 110 acres. It's also the only home of the golden lancehead, a deadly species of viper whose venom is so potent, it can "melt human flesh," according to The Huffington Post.

Any forest has the potential to turn into a creepy and terrifying setting for crime and bloodshed, but this one in Romania has the rep of being the most haunted forest in the world. It's known as the Bermuda Triangle of Romania with many reported ghost sightings, UFO sightings, and other unexplained events. And if you think you can enter with your phone and use it to call for help if needed, think again. It's very common for visitors' electronic devices to malfunction upon entering the forest.

A natural spring about 100-feet deep, Jacob's Well is a section of the nearby underground cave system and is incredibly dangerous. Eight divers have died when trying to explore the well's underwater depths. So, you have at least a few water ghosts to look forward to.

The Catacombs is basically an underground boneyard with themed sections for different sections of the body. Meaning, there's a ribcage hallway, a separate section just for skulls, etc. It's certainly cool, but so, so creeptastic and weird.

6. Island of the Dolls, Mexico

The legend of Isla De Las Muñecas goes a little something like this: a little girl died off the coast of this island near Mexico City more than 50 years ago. After her death, several dolls began washing ashore. The island's only permanent resident at the time was a recluse and began hanging the dolls from trees. Then he started collecting all the dolls he could find and hung them from trees. Now there are hundreds. And they are all looking to suck out your soul.

Where the legend of Dracula first began. Step inside his not-so-cozy castle estate for a tour.

Here's a fun little ghost town that'll haunt your dreams for all eternity. It used to be a mining town, but then an underground landfill caught on fire and didn't slow down once it reached the coal in the mines. Since the coal was dispersed beneath the entire town, the fire spread everywhere and created dangerous gas emissions and sinkholes all over the place. It's condemned and the underground fire is expected to burn for the next 100 years, at least.

Near the base of Mount Fuji in Japan, there's a haunted forest called the Sea of Trees. It's haunted because of the history of suicides that have taken place there. Apparently, it's a popular place for people to hang themselves from nooses tied to tree branches, and more than 70 people died there in one year alone. Also, because it's such a vast forest, police don't always locate the bodies, leaving hikers and visitors to discover them during a leisurely stroll.

The Romans just couldn't deal with plague victims — they didn't know what to do with them or how to dispose of their bodies once they died. Their solution was to send the thousands of surviving sufferers to Poveglia Island, off the coast of Venice, where they all died together. Then, a few centuries later, they did it again when the Bubonic plague hit. THEN in 1922, someone had the great idea to build a mental hospital on the island. The island remains uninhabited because, duh.

Because of some local volcanic events, this place remains a constant source of sulfuric air. In fact, it's the highest concentration of sulfur in the world. But here's where it gets totally batsh** crazy.... people willingly lived there. As part of a science experiment to measure the survivability of humans on this island, healthy humans volunteered to move there, and were paid to do so, and wore gas masks constantly while their health was monitored.

More like this
Anguilla Is The Under-The-Radar Caribbean Destination You Need To Visit
By Rachel Lapidos
David Tennant’s Transformation In ITV’s 'Litvinenko' Is Astonishing
By Sophie McEvoy
Here’s Your Daily Horoscope For December 6, 2022
By Mecca Woods
7 Joyful Alternatives To A Traditional Holiday Celebration
By Jessica Goodman
Get Even More From Bustle — Sign Up For The Newsletter