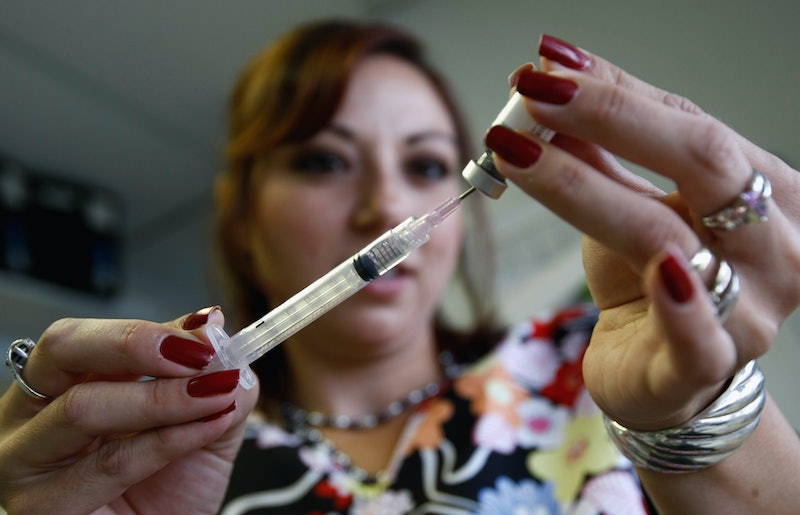 Measles, declared “eliminated” in the United States in 2000, could reach endemic levels, according to the Centers for Disease Control and Prevention, after an outbreak at Disneyland has infected at least 70 people. But the highly contagious disease isn't contained to just the California theme park — it has now spread to Utah, Washington, Oregon, Colorado, and even across the border to Mexico, and some physicians say it is a result of parents refusing to vaccinate their children.

In fact, 82 percent of those infected at the theme park were not vaccinated — six because they were too young, but the others because they or their parents determined they shouldn’t be vaccinated — a belief often stemming from a single, fraudulent study that linked the MMR vaccine to autism in some cases. And though physicians have said the outbreak is "100 percent" a result of the anti-vaccination movement, media outlets are still giving equal weight to both sides of the argument, in a false objectivity akin to letting climate change deniers espouse opinions readily debunked by scientific research.

When The New York Times, the country's Paper of Record, reports not just on decades-old research supported by 99 percent of the scientific community, but also gives column inches to include the views of a select few fringe individuals with no scientific background, it creates a false balance in the name of journalistic objectivity that's not just irksome, it's also dangerous: A 2013 study performed by Cornell University found that news articles that offer the "balanced" views of both pro- and anti-vaccinators are more dangerous to public health outcomes than articles that present just the view of anti-vaxxers.

As the Cornell study determined:

Results suggest that balancing conflicting views of the autism-vaccine controversy may lead readers to erroneously infer the state of expert knowledge regarding vaccine safety and negatively impact vaccine intentions.

In other words, the authors found that the false balance creates a sense of equal importance and evidence for the assertions on either side of the debate. And, especially in the case of the autism-vaccine link, that is just not reality.

As Russell Saunders, a pediatrician and contributor to The Daily Beast, writes, the single study that linked the MMR vaccine to autism has been determined to be completely meritless.

There is no legitimate scientific controversy about whether or not vaccines are safe. The original study that started us down this insane path by linking the MMR vaccine to autism has been retracted outright. The evidence against administering the MMR vaccine to healthy individuals is utterly without merit.

And yet, 25 people infected from the Disneyland outbreak have been hospitalized because they weren't vaccinated or were exposed to others who were not vaccinated. Measles can cause death and permanent disability. Although news organizations have a responsibility to report both sides of any controversy, journalists have a responsibility to distinguish between fact and fiction — particularly when it comes to public health and safety. An obscure movement within the Catholic Church might still believe that the sun revolves around the earth, but that doesn't mean news agencies report on it as a viable alternative to reality. Likewise, journalists need to exhibit due diligence when it comes to reporting other unsubstantiated claims easily disproved with sound scientific research.