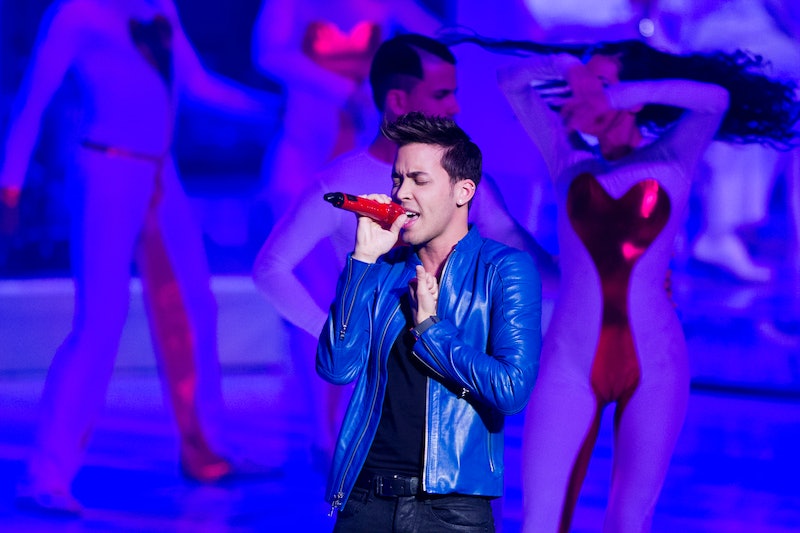 When someone has 3.74 million Twitter followers, you should probably know a little about them — but unless you're a fan of Spanish language bachata music, singer Prince Royce may not (yet) be on your radar. American viewers of the Miss Universe pageant probably aren't as familiar with the Latin superstar as they are with fellow performer Nick Jonas, but after Sunday night's performance, I have no doubt they'll want to be. Prince Royce is on the verge of the first big Spanish to English crossover in years and Miss Universe is a measured step in his global takeover.

Just look at his the Bronx-bred crooner's Billboard history: In his five years as a recording artist, Royce has racked up three number ones in Top Latin Albums, but only just made his debut on the Artist 100 and Hot 100 with "Stuck On a Feeling" — from 78 to 63 to 56 and rising. At age 25, Royce is already a veteran to the music business, with accolades and millions of fans. But there are huge chunks of the population still waiting to hear Royce's voice, and Miss Universe is the perfect way to reach them... it's, y'know, universal. While Royce's first English single might be the best way to ring in some new fans, I'm personally hoping he'll feature some of his more classic sounds, so the universe can see what they were missing.

Until a few months ago, Prince Royce's music could have mostly been described as urban bachata with an acoustic core. Royce, as a singer and a songwriter, is a romantic and his music and sound reflect that soft, sweet feel. And his fans seem to like that sound: 462,565,973 views on "Duarte un Beso" is creeping up on one billion in an unbelievable way. But as Royce grows up — he released his first album when he was just 20 years old — his sound is growing too. Of his new album set to release in 2015, Royce told Billboard: "It's a side of me that's always been here, only people never got to hear it ... I think people never really got to hear my R&B vibe."

And Royce takes a detour from his classic Latin sounds with plenty to show for it: he's been nominated for Top Latin Artist at the Billboard Music Awards for the last four years, has six Latin Grammy nominations to his name, including Best Contemporary Tropical Album and Best Tropical Fusion Album, and received the La Musa Award from the Latin Songwriters Hall of Fame in 2013. Royce is not just your average pretty boy singer — he's a musician and a songwriter, and the man knows how to make an album.

And, Introducing His First English-Language Album

So, make an album, he will! The aforementioned "Stuck On a Feeling" that's lighting up the Hot 100 is Royce's debut single from his first ever English-language album. The track, featuring Snoop Dogg himself, is decidedly more R&B than anything fans have heard from him, but the singer tells Billboard it's still 100 percent him: "As soon as I heard the track, it took me back to New York and the Bronx and the urban vibe." It sounds like Royce has a lot more music to give, and with all of the genre and language crossing he's planning in 2015, there's plenty of room to grow.