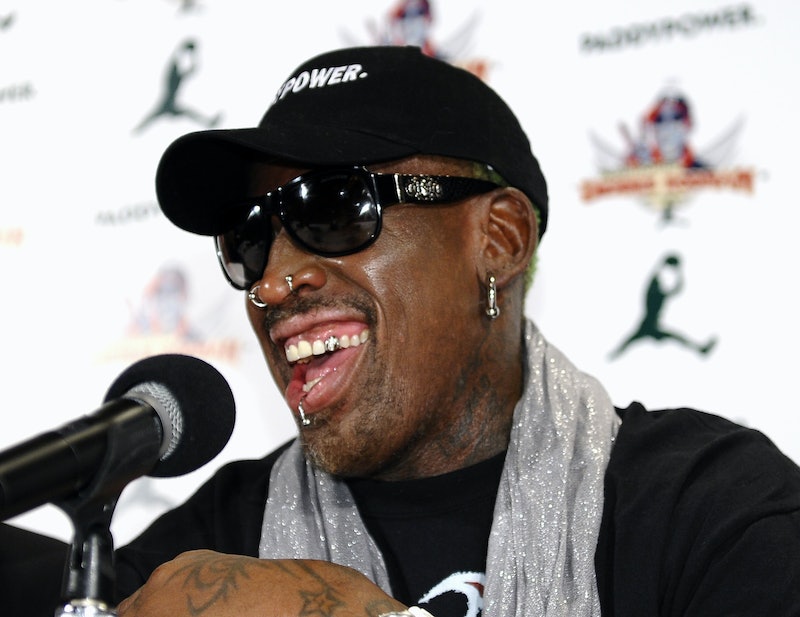 Dennis Rodman, the retired NBA star and BFF of North Korean dictator Kim Jong-un, has finally spoken about The Interview and the possibility that North Korea hacked into Sony Pictures' computer network in retaliation for the film. Rodman, who is one of very few Americans allowed to travel to North Korea in recent years and has a documentary about his time in the country debuting at the Sundance Film Festival tonight, said in an interview with The Hollywood Reporter that he doubts North Korea was behind the infamous Sony hack, because, well, he would know. In the interview, Rodman said:

How many movies have there been attacking North Korea? And they never hacked those. North Korea is going to hack a comedy, a movie that is really nothing? I can’t see that happening. Of all the companies … really? Over a movie?!

This marks the first time Rodman has publicly spoken about Seth Rogen and James Franco's controversial comedy, which features a depiction of the assassination of the North Korean dictator. While the United States government pointed to that scene as the catalyst for North Korea hacking Sony Pictures in December, Rodman isn't convinced. He said, "If the North wanted to hack anything in the world, anything in the world, really, they are going to go hack a movie? Really?!"

Interestingly, Rodman isn't the only skeptic. Not only did the Guardians of Peace (the hacker group that claimed responsibility for the Sony infiltration) not mention North Korea or The Interview when it sent the initial threats to Sony, but many independent security experts are also pointing out that the group didn't include The Interview as a reason behind the hacking until the media did. Nothing has definitively disproved the FBI's conclusions, but it's not out of the question that North Korea is not the perpetrator of the cyberattack.

People ask, ‘Why would you do that? Why would you go sit next to him. He’s a bad guy.' To me, I was so surprised. He treated me very, very nicely, like one of the family, you know. And I’m not a hater. I don't care what you do in the world. If you treat me nice, I’m good. And one thing people don't’ understand, until you go to North Korea and actually see it, it’s a whole different story.

Human Rights Watch and the over 200,000 North Koreans currently imprisoned in hard labor camps might beg to differ.