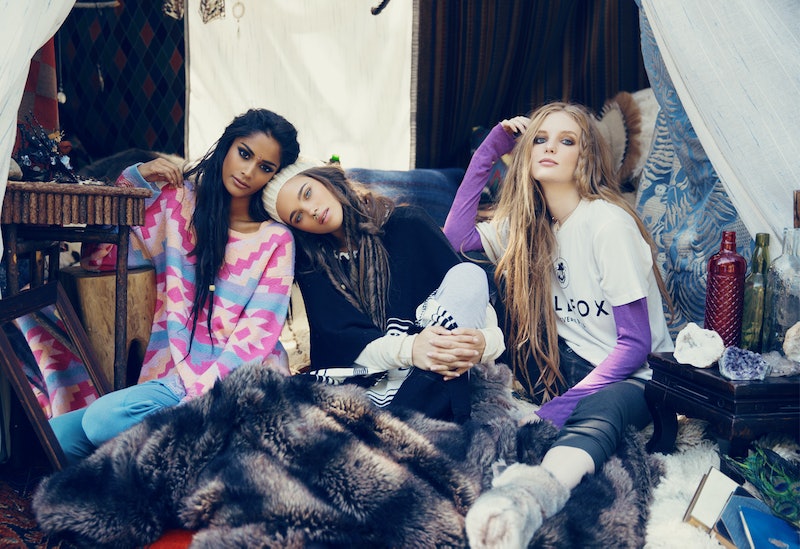 The spring lookbooks from some of our favorite lines and retailers are starting to trickle out and it appears that a trend is emerging: Bohemian looks are definitely going to be making their way onto shelves, racks and e-commerce sites this year. But with the trend, I have also seen the word "gypsy" used by fashion companies twice, in two days. Every few springs or so, something like this happens. The fashion gods decide that flowing garments in rich jewel tones or pretty pastels — and nature-inspired prints — will grace our bodies. And though it's not my personal taste, I think that the style we've decided to deem "bohemian" is pretty, feminine, and colorful.

I understand why the things that we've come to equate with the "gypsy" lifestyle are appealing and attractive: The idea that a "gypsy life" is full of magic, travel, adventure, and freedom is definitely seductive (and undoubtedly part of the reason we all adore Esmeralda). The problem is that as used by the fashion industry, this connotation of "gypsy" isn't a complete or accurate picture of who gypsies actually were, and still are today. Part of the reason this problem arises is that many modern interpretations of the gypsy are both appropriating and glamorizing the lifestyle of marginalized Romani people, and subsequently "gypsy" becomes a catchall term: Fashion's version of "world music."

The word bohemian "was originally a term with pejorative undertones given to Roma gypsies, commonly believed by the French to have originated in Bohemia, in central Europe," a BBC article reports. The key words in this analysis being "pejorative undertones." "Gypsy" might seem like a fun, cool, carefree way to label yourself to signify that you're different or artistic. But that would be sheer belittling of the struggles of an entire group of people, using a word that remains a racial slur today. The Romani had (and often still have) to live a nomadic lifestyle. Not because they were trying to be hip gypsies, but because they were persecuted. Approximately half a million Roma people were murdered in the Holocaust alone.

Roma people face stereotyping and racial profiling constantly. So when a lookbook uses the tagline, "She'll steal your heart," for a collection named "Gypsy," it's not eccentric or subversive — it's actually kind of racist. Within some of these lookbooks, there isn't even any traditionally gypsy-styled clothing to be found. There are, more often than not, caucasian women whose hair is put into dreadlocks, whilst they are wearing "Aztec" prints and feathered headdresses. I would never mean to say that people can't appreciate the fashions of other cultures, or engage in cultural exchange. But that being said, we need to be careful and mindful when adopting styles we like from a culture that isn't ours. And how can we do that?

For starters, we need to be mindful of the language we use and the history behind fashion or beauty statements like dreadlocks, and understand the current realities of the culture(s) from where the styles originate. This means understanding where we may hold privilege, and acknowledging when it would be inappropriate to co-opt something simply because we want to... because we like the way it looks. Adopting the styles of other cultures requires the understanding that some things — like eagle feathers or Native American War Bonnets — may have far more profound meaning than we can ever truly know.

For those who want to adapt something from another culture, it becomes imperative to research and find out what role that certain something plays in its culture of origin — and to determine logically whether it would be disrespectful to remove the item/style from that context. You like Aztec prints? Cool. I do too, and think that they're really beautiful! So why would I get a watered-down version of an Aztec print from a mall instead of seeking out an artist who is traditionally trained, or artisans carrying out that cultural history? Maybe I could even find a collaboration between an Indigenous artist or an Indigenously-owned company and a fashion collection! Is it a bit more work to look at fashion this way? Absolutely. But isn't avoiding harming or exploiting people worth it? Indisputably.