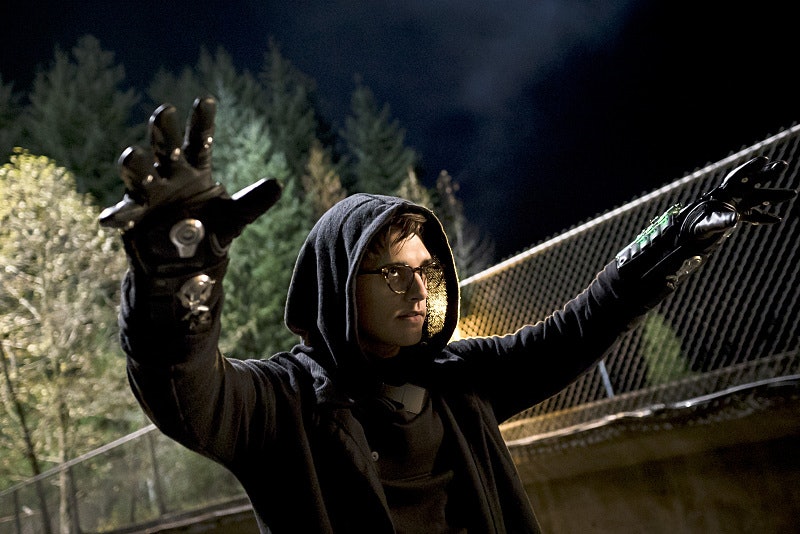 Here's a Cisco-worthy nickname that basically assigns itself: what do you call a villain who uses music to get others to do what they want? Obviously, the answer is Pied Piper, who will make his first appearance on The Flash this Tuesday. In DC Comics, Pied Piper, aka Hartley Rathaway, has been a long standing member of the villain group The Rogues. He was even name checked in last Tuesday's episode, "Revenge of the Rogues." Coincidence? Probably not. Now, we'll finally get to meet him, and all the evil sound waves he'll unleash on Central City. Looking to the comics, what do we already know about Pied Piper?

In the comics, Hartley was born deaf, but thanks to his family's wealth, was given the ability to hear. This caused him to become fascinated with sound, and he dedicated his life to studying everything about it. Hartley began experimenting with sonic waves, and then figured out how he could hypnotize others through music. Oh, he also mastered the art of deadly vibrations. Put this all together, and add in the fact that Hartley soon found himself bored and frustrated with his life (because scientific research is boring, I guess), he took the next step, and turned to a life of crime. This is where he first meets Barry Allen, and the two quickly found themselves at odds. In sort of a strange comic twist, Hartley actually reformed himself and became a friend and ally to many in The Flash universe. He even helped out Barry's nephew, Wally West (a later version of The Flash), and over time the two formed a friendship. Hartley even helped Wally move to Keystone City, and considering that I barely help my own friends move sometimes, Hartley was clearly a nice guy. One thing that sets Hartley apart from many other comic book figures is the fact that he is one of a very small number of openly gay characters in the DC Universe. In The New 52 reboot of DC Comics, Hartley is actually dating Detective Singh, who we currently know as Joe, Eddie, and Barry's boss down at the precinct (and who has already made mention to the fact that he has a boyfriend somewhere off-screen). Since Hartley jokes to Barry in the promo for this week's episode below that being "scooped up" by a guy in leather is a "fantasy" of his, it seems that The Flash will incorporate this aspect of Hartley's character, which is great to see, considering the lack of LGBT characters in comic adaptations.

But not everything is going to transfer over to television. Executive producer Andrew Kreisberg told Entertainment Weekly that compared to some of the villains already seen on The Flash, they "wanted to do something a little more grounded" with Hartley, and then mentioned that he is The Flash's "evil Harry Potter."

I don't know what that means, but it is exciting. We'll have to wait and see where exactly The Flash takes Pied Piper, and if he'll stick around long enough to become that friend from the comics.