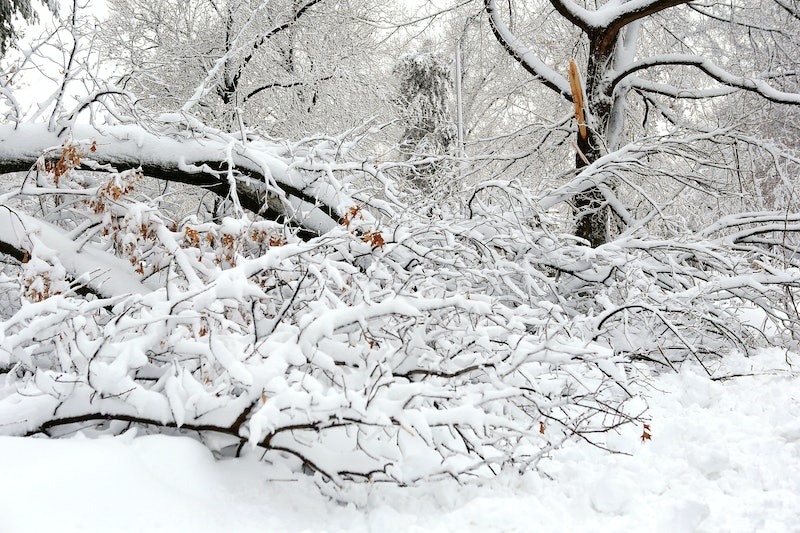 The storm of the century is apparently headed for the East Coast, with snowfall estimates now being measured in feet, rather than inches, in Boston and New York City. Blizzard warnings, long grocery store lines, and possible Uber surge pricing all combined to create the perfect conditions for social media stormageddon. The storm, which the Weather Channel is calling "Juno," but everyone else is calling "Storm of the Century" or "Will There Be School Tomorrow," might help New York City break its previous snowfall record for one storm, according to The Washington Post. That record was set back in February 2006, when a storm dumped 26.9 inches of snow on the Big Apple.

The Boston Globe reported that the brunt of the massive storm was expected to strike southern New England late Monday and could continue battering the coastal states with snow and wind until Wednesday morning. When all is said and done, New England could be looking at anywhere from one to three feet of snow, the Globe reported.

Here's how we know Boston and perhaps the rest of the Commonwealth of Massachusetts are pretty much screwed: The Weather Channel's Jim Cantore tweeted this afternoon that he was headed there to cover the storm.

Naturally, Twitter did what it does, and collectively panicked appropriately.

But not everyone was losing their minds, some were making preparations. With Sunday to prepare, plenty of people rushed to grocery stores before the storm hit to pick up their French toast ingredients (bread, milk, and eggs).

Others took a more philosophical approach.

There were other predictions for how the storm might affect the East Coast. You'll recall Uber came under fire for its surge pricing during Hurricane Sandy, which some expect could happen again:

For the most part, Twitterers on the East Coast were preparing for something big, even if they weren't sure what.

But here, look at this kid, she's not worried. It's all going to be fine, right?

More like this
Pret & Costa’s Coffee Is The Strongest On The High Street, According To Which?
By Sam Ramsden
This Is When Netflix Is Going To Start Charging You For Sharing Passwords
By Darshita Goyal
6 Organizations Fighting Police Brutality That You Can Support Right Now
By Syeda Khaula Saad and JR Thorpe
Twitter Has *A Lot* To Say About The "Single Penalty”
By Sam Ramsden
Get Even More From Bustle — Sign Up For The Newsletter
From hair trends to relationship advice, our daily newsletter has everything you need to sound like a person who’s on TikTok, even if you aren’t.