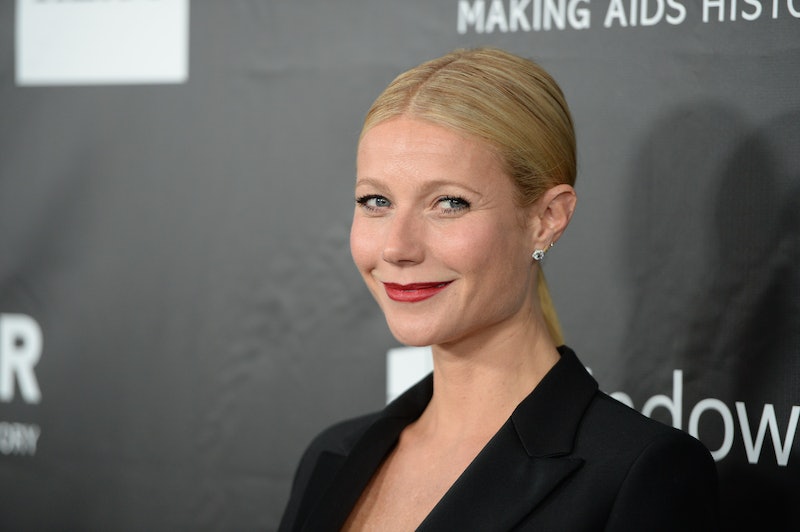 Gwyneth Paltrow is going to have a better Valentine's Day than all of us, and it's all because of a little secret weapon she likes to call "sex bark." Oh yeah, that's totally a thing, and here are some things you should know about Gwyneth Paltrow's latest GOOP recipe. First off, it is a dessert not unlike regular chocolate bark, only with magical, sexual ingredients like cacao nibs, ho shou wu, and a little something called “sex dust," which, according to GOOP, is an "aphrodisiac warming potion that will send waves of blood to all the right places."

Paltrow's recipe for sex bark appeared in her latest Valentine's Day-themed post for her infamous lifestyle site GOOP, and if it sounds a teensy bit bizarre, that's because it is. According to the site, sex bark is “a quick and potent chocolate recipe perfect for a sweet bite after a romantic dinner." Like regular chocolate bark, only for sex! Huffington Post reports that the mystical sexual ingredients for sex bark come from LA-based Moon Juice, a company which, according to its website, specializes in "divine juices, magical milks, miraculous tonics, abundant cleanses, lunar apothecary, moon pantry and stellular gifts."

The actual bark looks delicious and is probably easy enough to make, if you're willing to drop $93 for the Moon Juice products alone. But if divine juices don't do it for you, or if your sex bark plans go terribly awry, not to worry — Paltrow's latest post also includes recipes for spirit truffles and an adaptogenic latte. It's always good to have a backup plan, isn't it?