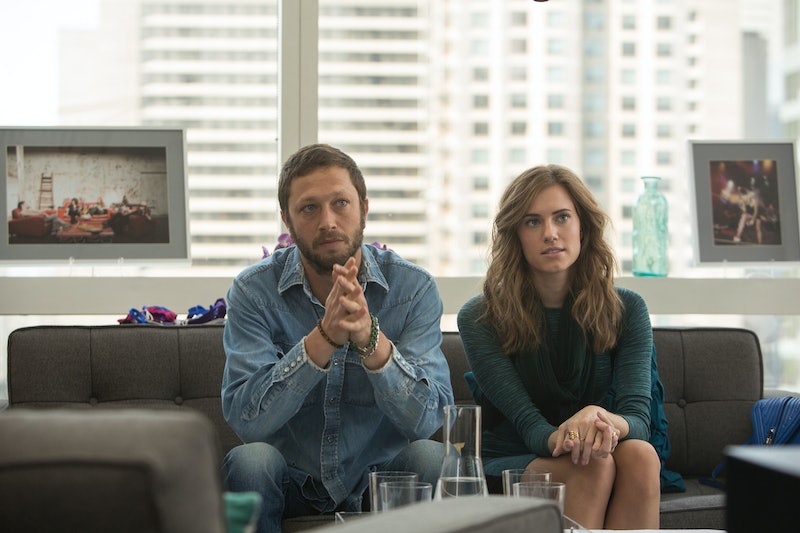 It'd be safe to say that Marnie & Desi are one hell of a toxic couple on Girls — and that's saying something for a show that once had Adam engage in some creepy-as-hell role play with Hannah back in Season 1. Marnie is clearly in denial that her relationship with Desi makes her a side piece, aka the recipient of Desi's disrespect, as evidenced by the scarf she was knitting him last week on Girls . (She wants to be with him all the time... even when he's with his girlfriend, as Hannah so callously pointed out. Barf.) But this week, Marnie finally mustered up the courage to stand up to Desi — even if she needed a pep talk from Ray to get it going. And say what you will about Marnie getting into this situation, standing up to Desi took a lot of chutzpah.

Marnie has always garnered the lion's share of hate from Girls fans. Shoshanna is hilarious, so she gets a pass. Jessa is a free spirit, so her antics are to be expected. Hannah is constantly furrowing brows, but that's the entire conceit of the show. But for some reason, Marnie Michaels really gets the hate a-churning. Perhaps the face-palm of a performance at Charlie's startup in Season 2 was the real clincher: Marnie had become a ridiculous, self-absorbed person, to a degree unlike any of the other girls because her moment came as an explosion of cartoonishness. I get it. I was rolling my eyes at Marnie too. And I rolled my eyes ten times harder when she kissed her unavailable partner in music in the Season 3 finale. But now, we've really got to chill out on the hate.

Marnie finally grows that metaphorical pair in this week's episode after she attends a meeting with Desi at a record label (or some music-related company where it's professionally acceptable to say, "before I pop off here"). The folks at the record label ask Marnie and Desi how long they've been together (one guy even dares to ask how their sex is, which is the more accurate question, especially after that graphic season premiere coupling). Marnie waits for Desi to say they aren't together, but when she asks for a cigarette, Desi takes control of Marnie, suggesting the way he might to his subservient life partner that Marnie not smoke a cigarette. Finally, Marnie has had it.

She storms down the sidewalk outside, until finally Desi tries to calm her down and she decides she's done. Marnie tells him their relationship is not OK and when Desi feeds her all that typical artsy New York guy BS (her opinion is a construct of what society says she should want, he was upfront about their relationship, their music is so great because they bone too, etc), Marnie drops the truth that so many women in that situation have trouble putting out there: it doesn't matter what was agreed upon, what matters is that it's not what she wants and that it's making her feel terrible. This is the closest I ever fathomed I'd come to pumping fist and chanting "Mar-nie, Mar-nie, Mar-nie!"

Desi tries to console her by saying their sexual arrangement is great for her because she can go around "this beautiful city" and have sex with whoever she wants. Oh yeah, great bonus. "I know what I want, but you're not offering it to me," she fires back. And while I want Marn to just be able to kick this loser Desi to the curb (I don't care how talented he is or how his eyes sparkle in the smoky Manhattan air), I have to give it to her: She really womaned up here.

I am worried that this New Marnie won't stick, but I think what we need to remember about Marnie, and about all of these women on Girls, is that they are drawn at their most vulnerable. We learn parts of their personalities that normal people don't offer up willingly and so their flaws are laid out for us to judge. And judge we do.

And at the risk of blindly reitering HBO's marketing phrasing for the series, they really are all just trying to get it together. I dare any Girls fan to open up every professional and personal decision they've ever made to the scrutiny these characters endure and see if they come out squeaky clean. Sure, Marnie and Co. do infuriating things far more often than most normal 20-something women I know, but this is a television show that runs on the mistakes and bad decisions of its characters. That's kind of part of the deal.