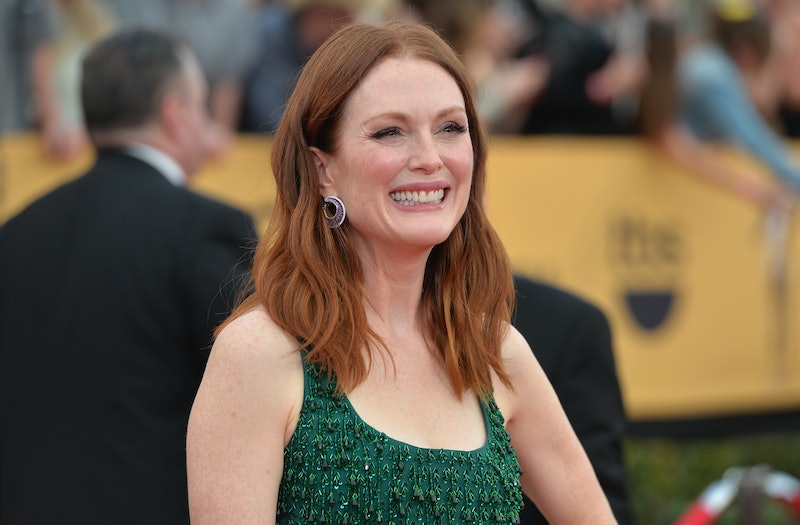 Hey, listen. Soap operas serve a purpose on American TV. In fact, they not only pass the time but tell enough of a compelling story that people still enjoy watching them even today — despite their poor reputation as a source of entertainment. (Just think how many times the revelation that someone watches soaps is treated as a punchline. Just think.) However, if you were expecting her soap opera beginnings to be a source of shame for Julianne Moore, think again. When Moore won the SAG Award for Best Actress in Film, she immediately gave a shoutout to As The World Turns that had fans going absolutely wild.

"When I was on As The World Turns," she said, to great laughter and cheering from the audience. "Yeah! I was so excited when they wrote two parts for me. You know, the classic twin sister role, the good and the evil one, and I couldn't wait to do it and I was so excited. And I realized it was super boring to act by myself. What I really loved, and what I really craved, and what was most exciting for me was being with another actor and feeling that intimacy and that excitement and that thrill of getting to know somebody in that way. And that's what keeps me coming back to acting again and again and again."

Moore was referring to, of course, her stint as Frannie and Sabrina Hughes on the soap opera, which was her big acting break and carried her career from when she joined in 1985 to 1988. Of course, the actress has spoken fondly of the show before — and even made another cameo appearance in 2010 — but for her to bring it up as part of her SAG Awards speech was noteworthy for more reasons than one. In the first place, it showed that she is completely unashamed of her beginnings even if it was on something most people consider "lame" or "overdramatic" or whatever criticisms are being cast against soap operas these days.

Second of all, it was a great way for Moore to show how far she's come as an actress and how much she's come to know herself and her craft in the years since her time on the show. Third of all, it was such a memorable line that even Birdman actor Zach Galifianakis had to riff on it by starting his own acceptance speech for the film with, "When I was on As The World Turns..."

Plus, it was an amazing throwback to fans who have followed her career all this time, as evidenced by the fact that Twitter absolutely exploded over it.

If you're sad that you missed SAG Award winner Moore on the show, don't worry. You can find plenty of clips of Frannie and Sabrina on YouTube to get your soap opera fix. Check out this trippy moment when Moore meets Moore in the most deliciously dramatic way possible.