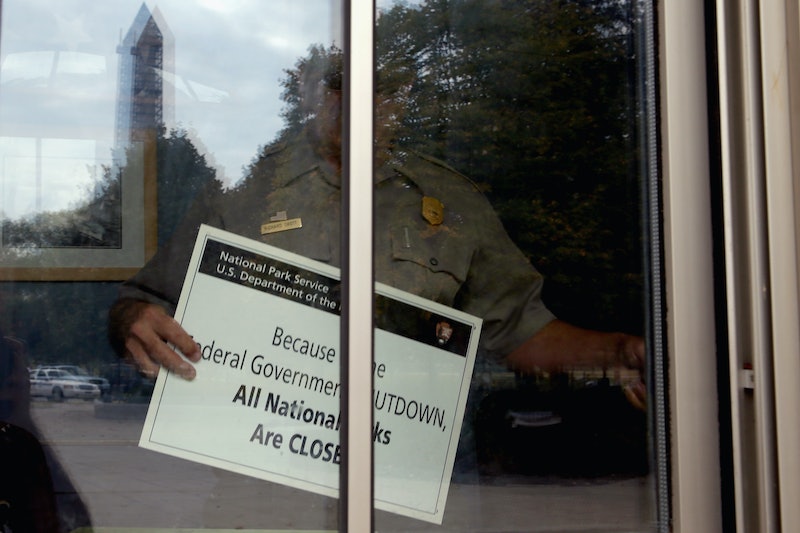 In case you've been living under a rock, the federal government is shutdown, which means a slew of folks are being forced to take unpaid days off work, and lots of services are out of commission until Congress can get its act together. Here are a few ways the shutdown is playing out:

It's NASA's party, and it can cry if it wants to

NASA had the saddest birthday party ever today. Instead of a big celebration for its 55th anniversary, 97 percent of employees spent the day at home on a mandatory furlough. Workers won't be able to return until the government resolves their funding issue.

With such a high rate of employee furloughs, NASA is the agency with the highest percentage of workers being forced out of the office. "NASA will shut down almost entirely, but Mission Control will remain open to support the astronauts serving on the space station," President Obama said Monday.

NASA also has time sensitive operations at stake. If the government shutdown carries on longer than expected, it could jeopardize the launch of a new probe experiment, the Mars Atmosphere and Volatile Evolution (MAVEN), meant to study the atmosphere of Mars. The launch is slated for November 18.

Six other federal departments and agencies have furlough rates of more than 80 percent. According to the New York Times, as many as 800,000 federal employees are facing unpaid vacation days thanks to the shutdown.

Furloughed folks include National Parks employees, some of whom work at Washington D.C.'s many monuments and memorials. Their day off led to outrage from a group of World War II veterans, who showed up at the war memorial for a tour. Instead of heading back to their bus quietly, the vets — many of whom were in wheelchairs — pushed passed barricades and made their way in as onlookers applauded.

Local businesses are trying to help take the sting out of the unpaid leave days for federal and state employees. Several restaurants including Z Burger, Union Pub, and Chef Jose Andres' establishments are offering discounted or even free food to furloughed workers for as long as the shutdown lasts.

Employees can't be thrilled either.

Obama, predictably, is not pleased

Watch the president's press conference Tuesday afternoon, in which he promised that he "will not give in to reckless demands by some in the Republican Party to deny health care to millions of Americans," and that the "Republicans do not get to hold the entire economy hostage over ideological demands." Obamacare, he promised, "is not going anywhere."

More like this
Why Eurovision 2023's Host City Won’t Be Revealed For A While Yet
By Sam Ramsden and Rachel Mantock
The Lionesses Are Calling For Equal Access To Football In Schools
By Sophie McEvoy
25 Things I've Reduced My Life To, In Addition To WFH In My PJs
By Ginny Hogan
7 Things We Learned From Rebekah Vardy's First Post-WAGatha Christie Interview
By Sam Ramsden
Get Even More From Bustle — Sign Up For The Newsletter