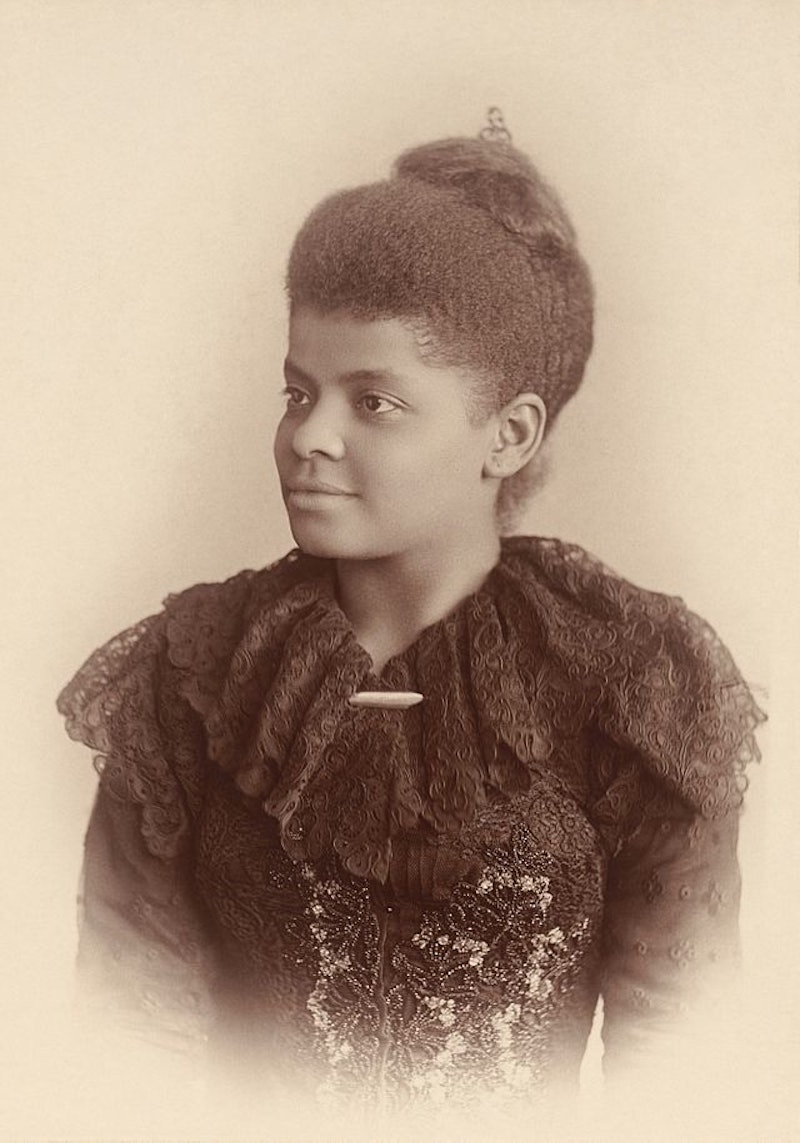 History is full of unrecognized women. That's not the most startling observation in the world; scribes throughout history have begrudged women any space in their important records of Kings And Emperors Doing Things, because ladies were just there to produce heirs and look nice, amiright? However, dig a little deeper — and go hang out in the history section of the bookstore, where every day new books seem to emerge championing some long-sidelined complicated woman, from Queen Victoria's suffragette goddaughter to famous murder victim Kitty Genovese — and you find heroines who are just crying out for attention, publicity, and a Viola Davis or Cate Blanchett-helmed red carpet extravaganza.

Biopics are the new historical vehicle to bring neglected women back to our notice. In the not-too-distant future, America's big screens will be showing biographical films about the likes of legendary Chinese Dowager Empress Cixi (who was such a totalitarian despot she put the emperor under house arrest ), the sweetly eccentric heiress Florence Foster Jenkins (starring Meryl Streep, no less), and Effa Manley, the African American co-owner of the Newark Eagles baseball team in the 1930s and 40s. Overlooked ladies in history are apparently the new Big Thing in film, and I'm pre-booking tickets to everything.

So here's a list of 12 fascinating women in history who seriously need to get Harvey Weinstein behind a story of their lives, like yesterday. Fascinating does not necessarily mean heroic, or politically powerful, or even particularly nice — but they'd all be pretty fantastic dinner party guests, provided you hid the swords.

I have no idea why there aren't at least five biopics of this amazing woman out already. Born a slave in Mississippi in 1862, she became basically everything: a civil rights reformer, fearless investigative journalist, and serious badass who took on race hatred head-on by writing openly about America's lynching as a way to control African American people.

She faced death threats, mobs, exclusion by other women's rights activists, and widespread disbelief about the truth of her lynching reports, even when she went around the world lecturing about it. She even refused to give up a spot on a white woman's train car, 71 years before Rosa Park. Are you breathless yet?

Harriet Chalmers Adams was essentially the first woman to professionally wear a pith helmet. She explored everywhere she could think of, despite being alive in a time (1875-1937) when women were supposed to sit still, drink tea and faint at uncouth things. She wrote for National Geographic about huge swathes of the South American countries she explored, and helped found the Society Of Women Geographers. And, when she wasn't doing awesome things like climbing the Andes on horseback, she was the only female journalist let into the trenches during World War I.

Known as "the nun shogun," Hojo Masako was a hugely powerful figure in the warrior government of Japan. Born in 1156, she took the veil of a nun after her husband the shogun's death, but still managed to maintain a stranglehold over the ridiculously shady workings of Japanese rule. These included possibly conspiring over the death of her unreliable eldest son, the ousting of her father in favor of her brother, and other twists tailor-made for a film epic.

Isabella Lucy Bird was a ridiculously rebellious woman. What other daughter of a Victorian clergyman survives a tumor on her spine and promptly decides to travel the world, have a serious romantic affair with Wild Jim Nugent in the Rocky Mountains, and visit everywhere from Vietnam to Hawaii? She had about fourteen lives in one, traveling with British soldiers in Tehran and training as a doctor as an afterthought. She used a ladder gifted to her by Morocco's Sultan to mount her horse, and wrote 18 volumes of observations. A scriptwriter wouldn't even know where to start.

Annie Edison Taylor wasn't an explorer, or an heiress, or even particularly brave. She was just a woman who decide to do something nobody had ever done before. On her 63rd birthday, October 14 1901, she was the first person to go over Niagara Falls in a barrel, in which she'd been packed with her lucky pillow. She did it to make money, but the publicity didn't last, and she died in obscurity — and the barrel was lost after her manager stole it.

Nellie Bly was arguably the world's first immersion journalist, and she made Tintin look like a complete loser. She did a circumnavigation of the world in 72 days just to see if Jules Verne's 80-day limit could possibly be achieved in real life, but the feat for which she's mostly remembered is her terrifying investigation into the conditions in mental hospitals, "Ten Days In A Mad-House," for which she pretended to be insane and had herself committed.

Almost as a sideline, she married a 73-year-old millionaire at the age of 31, and patented several inventions including the modern milk can. As you do.

With the release of a blockbuster biography, people are already clamouring for this Egyptian queen's life to be made into a film. Hatshepsut was the outright ruler of Egypt for 22 years in the Eighteenth Dynasty, and she was really good at it, making Egypt peaceful and hugely prosperous.

She built amazing temples to herself everywhere and prevented a civil war, all while having to wear a false beard. After her death, somebody tried to erase all her names and achievements from her buildings, possibly because a woman being king was seen as offensive. It didn't work.

Jeanne Bare was a thoroughly enigmatic figure in more ways than one. A French orphan, she was the first woman to circumnavigate the globe by boat, and she did it while dressed as a man — because she was on board as an assistant to her lover, the splendidly named widowed naturalist Philibert Commercon.

The two travelled together happily, botanizing their way through Mauritius, Tahiti, Madagascar and other exotic climes, discovering bougainvillaea along the way. After Commercon's tragic death she married an officer, came back to France, and was given a pension by the government "to this extraordinary woman."

I am boggled that Maria Tallchief hasn't had a biopic devoted to her yet — though the 88-year-old prima ballerina only died in 2013. She was America's very first prima ballerina, the star of George Balanchine's famous New York City Ballet, and the first famous Native American ballerina. After hideous discrimination as a child that led her to contract her full name, Tall Chief, into one word, she became a hugely beloved ballet star, but her personal life was dramatic: Balanchine, 21 years older, asked her to marry him when she was 21, but eight years later had the marriage annulled.

Alexandra David-Neel was another woman who seemed to combine seven or so lives into one. A Belgian aristocrat born in 1868, she trained as a prima donna, wrote an anarchist treatise so alarming that publishers refused to touch it, and travelled repeatedly to India and the surrounding areas, including Tibet, during the period in its history when it was closed to foreigners.

This, to put it in context, was kind of impossible. She befriended (and possibly seduced) the Sikkim Maharajah, and then adopted a young monk, Aphur Yongden, who would be her traveling companion throughout Tibet and Japan. In her memoirs she recounts saving Yongden from a blizzard by hugging him and artificially raising her body temperature through meditation.

The Byzantine empress Theodora, wife of Justinian I (500AD-548AD), is mostly famous because early historians were pretty convinced that before she was a queen, she'd been a prostitute. If that was true, it was an epic tale of a woman raising herself above circumstances, because Byzantium was ridiculously pious and the Emperor was the head of the church. It's more likely, however, that she was an actress or otherwise low-born, and that her enemies conspired to make her seem hypocritical and lustful with a dark past. Since all evidence points to the fact that she was actually an effective and just leader, this seems incredibly unfair.

This is the sort of story that would make for an excellent light-hearted Maggie Gyllenhaal flick. Annie "Londonderry" Cohen Kopchovsky was the first woman to cycle around the world, and she did it for a bet — two gentlemen in Boston laid a wager in 1895 over whether a woman could take care of herself. According to her, they gave her 15 months, and despite never riding a bicycle before, she set off.

It's more likely that it was an advertising stunt, since Cohen was also a journalist and was paid to carry placards with pictures of spring water, but she definitely made it around the world in the allotted time. She called herself The New Woman, but her notoriety soon faded, and it's about time she was brought back.