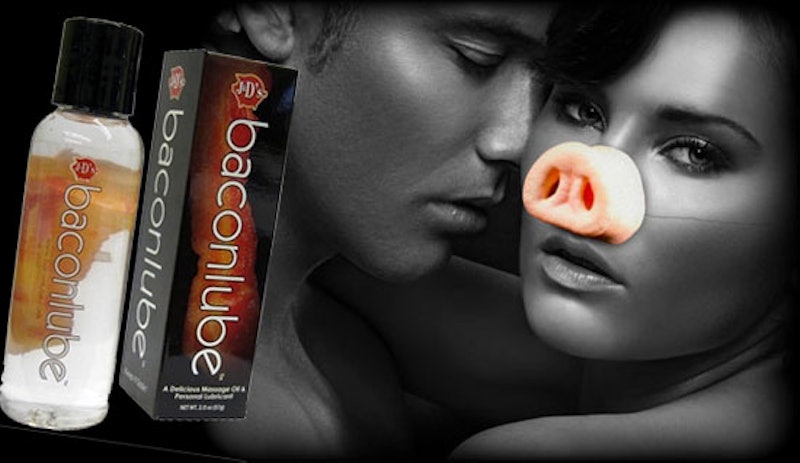 In case you're in any doubt that we clearly live in the future, let's review: our fridges talk to us, our underpants can communicate, and science can make basically anything with a flavor into lube. Sometime in the late 2000s, sex-having humans stopped being satisfied with lubricant's traditional gamut of tastes — strawberry, banana, pina colada for the extra wacky — and started looking in their cupboards for other inspirations. The results are an inspirational paean to the power of human ingenuity. And also very funny. Fruit's now old-school, charmingly outdated; the real stuff's a Michelin-starred gourmet experience. We're reaching the point where Willy Wonka's three-course-meal gum is a reality in lubricant form.

Lubes with flavor have actually been around for centuries, with ancient examples including olive oil and mashed yams (though that was more necessity than hunger). But, regardless of their origins, flavored lubricants of all kinds aren't going anywhere. So, obviously, I set out to find the 9 weirdest ones.

Some research led to dead ends. A rumor from 2013 that Astroglide was thinking of releasing pumpkin spice-flavored lubricant was an obvious hoax. (Though you can, of course, buy pumpkin massage oil on Etsy. Because Etsy.) However, it's incontrovertible that the brave new world of lube is producing ever more complex flavors, from specific baked goods ... to alcohols that nobody with any respect for their genital tissue should use near private parts.

In the wake of the legalization of cannabis in Colorado, an enterprising lubrication company has released the world's first "weed lube," a combination of coconut and marijuana oils. Foria is designed to enhance the sexual experience through increased sensitivity and relaxation, and thus far, the reviews have been pretty stellar. If you're in California or Colorado you can nab some from their website and try it for yourself.

This one got a lot of mileage when it first came out, because it was produced as a joke, and then the makers at J&D's Foods discovered that people were seriously willing to buy it. Salt plus sensitive body parts makes me shiver (I have an image of a slug-like fate, or at least stinging), but this at least has a carnivorous twist.

This falls into the category — alongside salted caramel, mocha and other undoubtedly tasty flavors — of Things That Are Fine But Maybe Shouldn't Be On My Bits. I love a dessert treat, but why slather something so hunger-inducing on a body part that won't produce anything nutritious? Also, there's a risk of me getting confused and biting it.

Not only is this abjectly confusing, it's also a warming lube. So while you're smelling a drink that's meant to be crisp-cold, you're feeling warmer than Louisiana in summer. Surely that's a sensory contradiction that must get people right out of the mood, guys.

This product appears not to be available any more, despite every dude's magazine with a keyboard lauding its praises. Whiskey Dick, to give it its glam full name, promised the notes of bourbon in a perfectly slip-sliding package. Perhaps naming a lube after an erectile dysfunction wasn't such a great proposition after all.

The description for this macadamia-based lube promises the "nuttiest nuts in all the land." Is this a sexy smell? Does it really make people aroused? Is there some kind of unique appeal to this that I'm missing, like those Yankee Candles that promise to evoke a special moment in your childhood where you learned how to ride a bike but just leave me wondering why everything smells like burnt Cinnabuns?

This seems like a sensible idea — the taste of honey without the seriously sex-unfriendly stickiness — until you see that it comes in honey's traditional bear-shaped jar. Which may possibly lead to confusion, yeast infections, and small children asking you why their toast keeps sliding off their plate and out the door.

To me, this is by far the most confusing, because red velvet cake does not taste like much of anything. It looks beautiful, but it's plain sugary cake with red food coloring and nice frosting. If you're going to pick a cake to distil into a sex aid, why not pick something elaborate? Sachertorte? Black Forest? Christmas pudding?

Fluid bubble gum just sounds like an accident. It doesn't sound like a sexy interpretation of a much-loved texture experience; don't we all just put up with the synthetic, squeaky taste of bubble gum for the pleasure of creating large balloons with our mouths?

I'm sorry, but if the lube doesn't give me the pleasure of making sticky globes in and around my partner's most intimate parts and then popping them, I'm not on board.