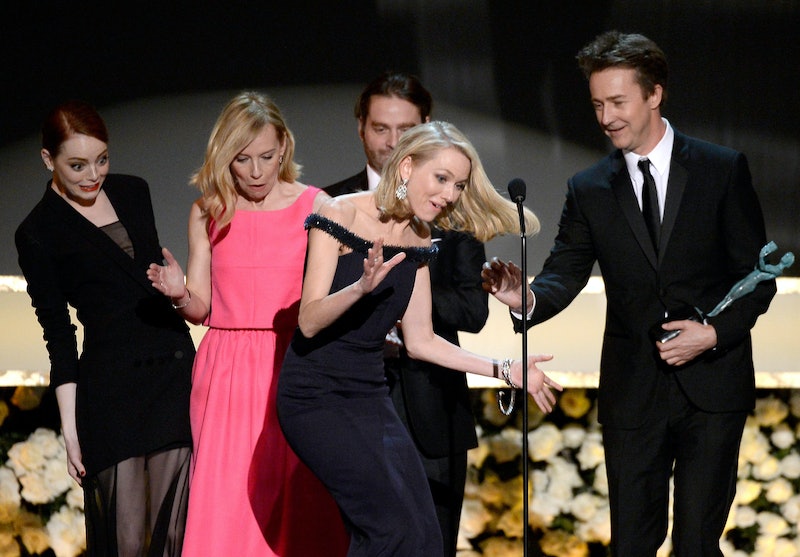 It's not often in life that celebrities are really just like us, but when it comes to klutzy behavior, we are all Jennifer Lawrence. Someone stole her thunder in the falling department when Naomi Watts tripped on Emma Stone's dress at the 2015 SAG Awards on Sunday night, and I'm not sure which reaction is better — Stone's shocked face as her Birdman costar took a tumble, or Watts as she said, "Oh my god, wow" in a high-pitched voice after she got up to the microphone. Hey, someone had to take over for Lawrence during award season this year, and I'm going to officially name Stone and Watts as her stand-ins. Hopefully they bring their clumsiness and adorable reactions to the Oscars, too.

J. Law isn't the only star who is notorious for falling down. There have been many memorable trips down red carpets, across stages, and even both up and down staircases over the years, ranging from Katy Perry slipping in icing onstage to Beyoncé tumbling down stairs during a concert to Jennifer Lopez walking across a bunch of men and then wiping out. Relive 11 of the best celebrity klutzes below, and then feel like an A-lister the next time that you trip on your own two feet.

Naomi Watts At The 2015 SAG Awards

It all happened so fast that it's hard to process, so just stare at Stone's face.

Jennifer Lawrence At The 2013 Oscars

The fall heard 'round the world happened when J. Law went to accept her Best Actress award at the Oscars. Hugh Jackman tried to help her, but she got up on her own, adorably.

Jennifer Lawrence At The 2014 Oscars

The next year, she followed up with tripping over a cone on the red carpet. Priceless.

She recovers so swiftly after falling down the stairs that you almost forget it happened.

After diving face-first into cake, she slips on the frosting and takes a dive. Somewhere, Swift is laughing at this video still, because baby, now they've got bad blood.

Beyoncé At A 2009 Orlando Concert

Even though Bey reportedly asked fans not to put up this video of her falling down a flight of stairs in Florida, a grainy video made its way on the internet. Her recovery was ***flawless.

Jimmy Fallon With Chelsea Handler In 2010

What happens when you challenge Handler to a martini contest? You wipe out. Fallon was running around with full cocktails when he slipped and crashed into her.

Sure, she can climb across men onstage, but can she stay on them? Not exactly, but she did land on her feet.

Let's pour one out for the Jonas Brothers. At an earlier AMA show, Joe slipped on broken glass and hurt his hand. Maybe not the safest idea?

Shania Twain At The 2011 CMA Awards

After being introduced by Kid Rock, Twain thought about his duet with Sheryl Crow and fell over. That's how I see it, at least.

Joaquin Phoenix After He Raps In 2009

Remember when Phoenix rapped and went crazy, but it was all just for I'm Still Here? If you don't, just watch this video of him rapping, jumping, and falling.