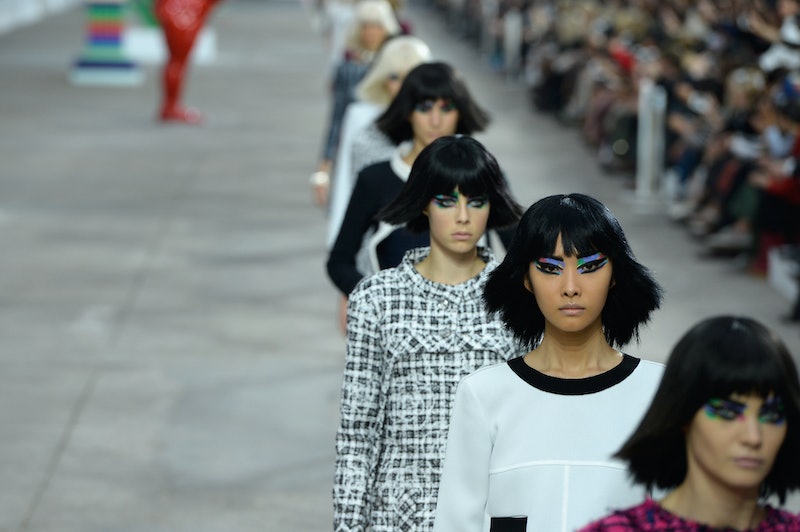 I sincerely hope you all heeded my warning to stay home from work today and watch the Chanel show, because, people, it was an extravaganza. An irreverent art show designed to make art snobs uncomfortable. A colorful collection inspired by vintage paint swatches. Also, THERE WAS A CHANEL NO. 5 ROBOT. In any other context, I'd be making it all up, but this is Chanel, and it's better than fiction.

This morning's show took place in a gallery setting full of ridiculous, larger-than-life art installations that were brash, self-referential, and a little shocking. There was a nude lady reclining, Narcissus-style, on a Plexiglass platform. There were giant interlocking C's everywhere. Did I mention the robot? In short, it wasn't for the tea and crumpets crowd.

In case you're waiting to hear the name of famous sculptor who designed it all, don't hold your breath: These installations were dreamed up by Karl himself. Come on — you thought he was going to hire a sculptor? What, for this kind of thing? It's just fashion.

As the audience faced the wall of wacky amateur art (is it fair to call it that? Karl isn't, after all, an actual sculptor...), the models filed out in outfit after brilliantly-colored outfit. It was a massive show, almost 90 looks, and there wasn't a single evening gown in sight ("The red carpet is not fashion," Karl told WWD ).

The playful elements — chokers with faux pearls the size of golf balls, heels with socks attached, a random hot dude with a painter's palette (seriously!) — did nothing to take away from the gravitas of the construction. Karl might have been a little tongue-in-cheek with the sculptures, but the clothes were no joke.

For example, he reinterpreted the iconic Chanel tweed and jacket again and again, using bright colors that avoided the splashiness of neon, and softening up its grandeur with scarves and lace:

Some other "trends," if we can be so trite:

And we have to talk about the eyes — crazy, fingerpainted-esque smears of color with black painted-on brows that managed to be both playful and intimidating at the same time. Lesson learned: You don't need gallons of black eyeshadow to smite a man with your gaze.

A smattering of ethereal neutrals appeared from time to time, as though to remind us that Chanel can still do breathtakingly beautiful, but for the most part the collection was that charming bright pairing of cheeky and legitimate that only a confident designer (or woman) can truly pull off.

Check out the whole collection over on WWD.