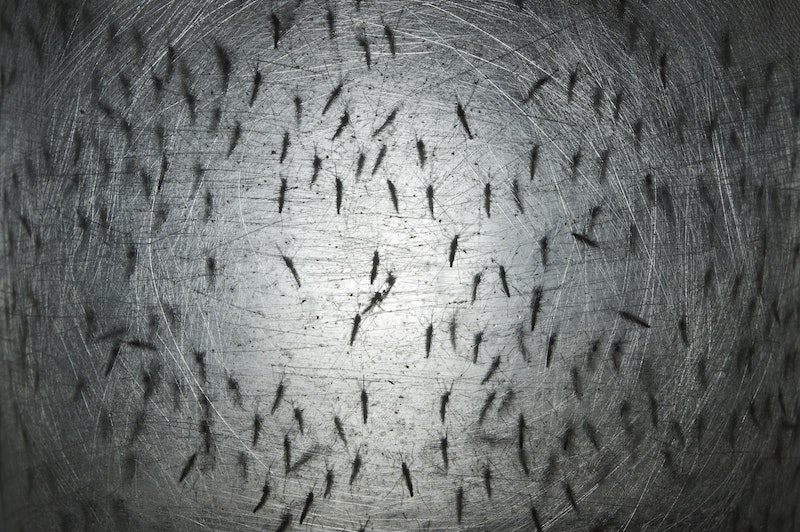 Well, here's a sentence you probably didn't expect to read — millions of genetically modified mosquitoes may be coming to Florida if a British biotech company has its way. It's part of a project to thwart two specific viral diseases that may potentially be on the rise in the United States. The reasoning is equal parts cautionary and fascinating, and it's stirring up controversy for obvious reasons. Genetically modified organisms have been controversial in the U.S. for years, usually within the realm of food production.

Here's the long and short of it. The researchers want to get out ahead of two diseases: Dengue, also known as "break-bone fever," and Chikungunya, a viral fever that can causes sore, painful joints for days, weeks and months, and can prove fatal in the worst circumstances. If the latter sounds especially familiar, it may be thanks to some recent entertainment news — Lindsay Lohan recently contracted Chikungunya during a trip to Bora Bora.

Basically, as more and more of these virus-bearing mosquitoes may begin to make their way to American shores — a natural function of, you guessed it, climate change — the researchers are eying a new, dramatically idea to try to prevent them from taking hold — genetically modifying male mosquitoes to ensure they produce dead larvae.

The British biotech firm Oxitec is the driving force behind this idea — they've reportedly already released some 70 million similarly modified mosquitoes in other countries around the world. It's still a bit early to say whether it will happen here, since the Food and Drug Administration has yet to weight in on whether they'll allow it to go forward. But if they do, millions of these modified mosquitoes would be released into the Florida Keys. Oxitec asserts that the modified DNA (constructed from genetic pieces of E. coli and herpes simplex, among other things) is not harmful to humans, and that only non-biting male mosquitoes would be released into the environment.

It's sure to be a hard sell from a public relations standpoint all the same, however. Oxitec spokesperson Chris Creese told the AP that the project, if approved, would pose no risk to human health.

We are confident of the safety of our mosquito, as there's no mechanism for any adverse effect on human health. The proteins are non-toxic and non-allergenic.

Mosquito researcher Phil Lounibos of the Florida Medical Entomology Laboratory, however, believes that Oxitec may be playing up some of their assurances, according to the AP.

I think the science is fine, they definitely can kill mosquitoes, but the GMO issue still sticks as something of a thorny issue for the general public. ... I'm on their side, in that consequences are highly unlikely. But to say that there's no genetically modified DNA that might get into a human, that's kind of a gray matter.

So, what do you think? I can't deny the whole thing sounds a little frightening, in that (admittedly under-informed) casual way. I guess we'll just have to wait and see what the FDA decides — they've said that no field testing will be allowed until the proposal has been thoroughly vetted.

More like this
6 Organizations Fighting Police Brutality That You Can Support Right Now
By Syeda Khaula Saad and JR Thorpe
Watch Jacinda Arden’s Devastatingly Honest Resignation Speech
By Sam Ramsden
Here’s Where The NHS Nurses’ Strike Currently Stands
By Sophie McEvoy
The 5 Best Insoles For Overpronation & Flat Feet, According To Experts
By Jenny White
Get Even More From Bustle — Sign Up For The Newsletter
From hair trends to relationship advice, our daily newsletter has everything you need to sound like a person who’s on TikTok, even if you aren’t.