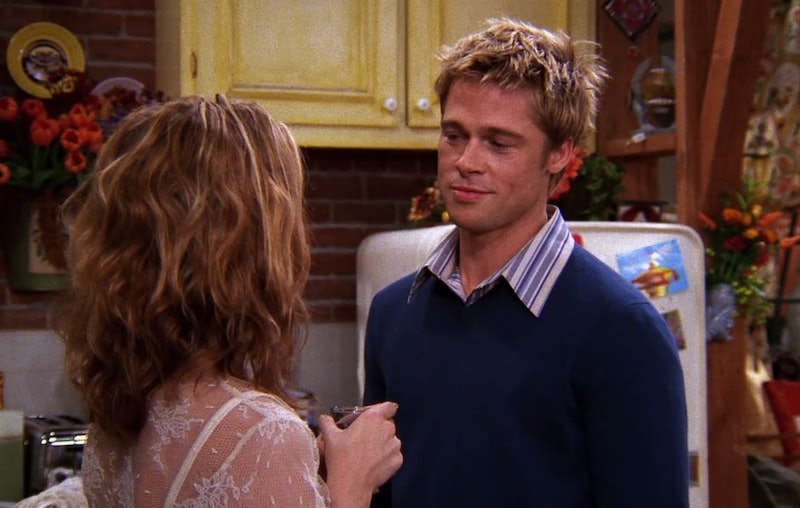 You don't always know what an episode of television will come to mean when you're making it. Such is the case with the Brad Pitt episode of Friends, "The One With the Rumor." The creators, writers, and cast certainly knew what they were doing with it at the time: This was Brad Pitt, appearing on the most popular television show of the era alongside wife Jennifer Aniston. This was huge. This was blockbuster. This was American fantasy come to fruition. Perhaps no other episode of television captures the entertainment atmosphere of 2001 quite like this one.

It's probably fair to say, though, that no one on-set for the making of that episode knew the position the episode would become as a sort of memorial. They had no way of knowing what was going to go down in the personal lives of these two mega-stars in the following four years — or what would go on in their tabloid personas in the decade after that. It's these events that cast an interesting aura over Pitt's guest-starring episode of Friends.

Just as it was impossible to watch that episode at the time without the spectre of the stars' real-life relationship imbuing it with a special kind of context, it's impossible now to watch it without thinking of everything that happened in the aftermath. From Pitt and Aniston to Friends itself, this episode combined three of the era's most iconic elements. Re-watching it comes with some baggage, perhaps more-so than any other single episode of the show.

Here are the emotional stages of watching "The One With the Rumor" in modern times.

It's a Friends Thanksgiving episode and it stars Brad Pitt near the peak of his Hollywood Golden Boy era. This episode is a historical treasure.

From Phoebe's outfit to the simple fact that it's Friends, this episode is like a time capsule to everything we idolized in early-2000s culture. Did I mention Pitt's frosted tips?

Ah, the slow but sure ravages of time. I also get pretty melancholy over the casual transphobia a lot of '90s/early-2000s sitcoms exhibited, which bubbles up in this episode.

Look, this episode's hilarious. If you're not spending the vast majority of your time watching this episode getting lost in how enjoyable Friends can be then I'm sorry but you're doing it wrong. Aniston and Pitt pretending to hate each other when they really love each other! Pheobe trying to get in on that Pitt action every chance she gets! It's golden.

Not so much anger at Brad Pitt (he seems pretty happy in his life so I'm hardly gonna fault his decision) but at what the media did to Aniston in the wake of their break-up. She definitely got the crap end of the stick on this one. Her life also seems pretty damn happy, but there's a lot to be said for how the tabloids milked this particular divorce.

Aniston spent the ensuing years being painted as a baby-crazed sad-sack of a lady, which seems not only wildly inaccurate but pretty damn unfair and definitely sexist. People break up every day and a lot of people still aren't over the fallout of Pitt and Aniston's split — and it wasn't even our split to be upset about! Trust, tabloids, Aniston's doing just fine for herself.

This episode is great. It's impossible not to circle back to enjoyment.

Just because it ended doesn't mean we should look at the union between Pitt and Aniston as meaningless; if that were the case then movies like The Theory Of Everything would be meaningless because the marriage between Jane and Stephen Hawking also ended in a cheating scandal. They obviously loved each other, and this episode stands as a memorial to the way that love reached out and touched our culture at large. That their union ended is not always the point; here the point is that it happened, and that it contributed to one of the best Friends episodes of all time.