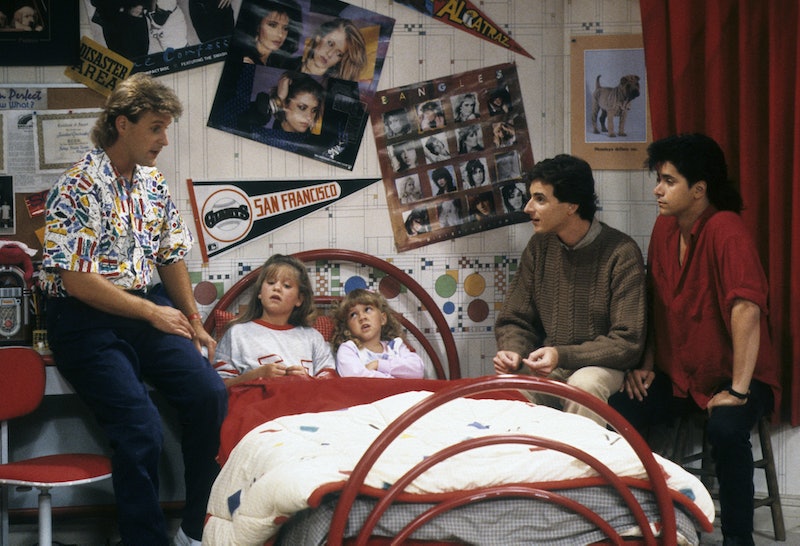 As you can tell from the recent '90s nostalgia boom, the final decade before the millennium was quite a time to be alive. Part of what made the '90s so special is that it was an era right on the brink of the digital age — and as Millennials, our childhoods were the first to include both the landmarks of the classic American childhood (climbing trees, actually hanging out with our friends in person) alongside the first creeping elements of our modern digital culture (Digi Pets, AOL).

And nowhere is this divide clearer than in '90s sitcoms. Sitcoms of the '90s are caught between two worlds — between the traditional ways of life usually depicted in sitcoms, and the ways technology was changing our lives. This all explains why we thought Zack Morris' cell phone was so cool, despite the fact that it was the size of a cinder block.

This is also why '90s sitcoms loved to include topical references — like how the Beach Boys guest starred on Full House more often than I can keep track of. They wanted to remind you that they were happening in the now, and were not part of the weird, dark past where people diddn't even have Skip-Its or gel pens.

This is also why '90s sitcoms had their very own set of tropes that seemed to show up in every single show. These hopelessly cheesy tropes were the decade's attempt to put their own spin on the sitcom, to show that their TV shows were cooler than the TV shows of the past. They may not quite have worked...but we loved them anyway.

Wondering what they are? Here are the nine most defining characteristics of any '90s sitcom.

We’re all familiar with the scenario: you line the bed with pillows to look like a body, place a basketball or other round object where the head should go, and voilà — you, a TV teen, are free to go sneak out and engage in mischief. Though arguable popularized in the '80s in Ferris Bueller's Day Off, the pillows-in-the-bed trick was a true '90s-sitcom staple. I recently caught a rerun of The Fresh Prince of Bel Air where Will had gone so far as to place a pair of shoes sticking out of the covers, which in actuality, would probably work against you.

Of course, there were catchphrases on TV shows long before the '90s — television has always been a major influence on our common vernacular. But just about every single '90s sitcom can be associated with a famous phrase, which certainly makes this era of television stand out. If you grew up in the '90s, you're no stranger to catchphrases such as "You got it, dude!," "How you doin'?," and "Did I do that?"

3. The One Serious Episode

Every once in a blue moon, '90s sitcom writers decided to mix it up and tried to get real with a serious episode. And it was always awkward. Take Zack Morris cradling Jessie Spano as she has a caffeine-pill induced meltdown and hysterically belts out a painfully overdramatic rendition of "I'm So Excited." It's likely that the producers of '90s television thought that these episodes were a sneaky way to get through and teach lessons to kids of the '90s — which may have been a step up from the corny "After School Specials" of the '70s and '80s. But really, they ended up being almost as absurd and laughable.

You know who I'm referring to — your Urkels, your Kimmy Giblers, your Newmans. Sure, TV sitcoms always had annoying neighbor characters — but the '90s are notable for the sheer number. Every home seemed to come complete with an irritating person who lived next door and dropped in unannounced. These off-the-wall, quirky characters were constantly interjecting into situations in which they are unwanted, yet they never seem to get the hint.

For some reason, this event almost always occurred in an elevator (i.e., Mr. Belding's wife on Saved By the Bell or Fran from The Nanny — who just barely made it out of the elevator before her baby burst onto the scene). It was also always far less messy than an actual birth would be. Someone who is in no way medically qualified manages to facilitate the birth pretty seamlessly, while the woman giving birth maintains her perfect '90s hair and a fresh coat of iridescent lipstick. Totally realistic.

The arrival of certain characters, like Kramer on Seinfeld or Jazz on The Fresh Prince of Bel Air, always drew applause. I sort of feel like this was simply a way to prove to viewers that they were in fact viewing a live taping, and the audience was COMPLETELY SURPRISED and delighted by this character’s appearance (even though they are on the show pretty often, and we all know they’ll be coming in, with their signature move, sooner or later).

If you’re anything like me, you’ve found yourself shedding a tear over a classic end-of-episode Full House heart-to-heart between Danny Tanner and his daughters, despite the cheesy '90s music and painfully cliché lines. Or how about when Will's father leaves on Fresh Prince, resulting in a heartwrenching moment between him and Uncle Phil? Brb, sobbing.

8. The Baby Who Has No Idea What’s Going On

These babies had the cushiest gigs in the world, given the fact that their only skill was existing. They could easily pay my student loans with the amount of money they made in a single episode, yet were entirely unaware of what was happening around them. But even though we knew that those babies could buy and sell us, we still found ourselves gushing over baby Michelle Tanner or little Raven-Symoné. There are few sitcoms today that feature a baby with significant importance to the overall story, aside from Good Luck Charlie. But in the '90s, having at least one cute baby seemed to be a requirement (just like having a catchphrase).

We've been waiting and waiting for these characters to get together and it's FINALLY HAPPENING — until some sort of ridiculous obstacle pops up (cue Uncle Jesse falling into a tomato truck after sky-diving the morning of his wedding to Rebecca), a time crunch, a cute flower girl, and an obscene amount of lace (I'm looking at you, Topanga).

Yeah, they were full of laughable dramatic acting and cheesy endings. But we still love '90s TV shows — in spite of, or maybe even because of, their cheesiness. Plus, maybe they were more like real life than we thought. Now, if you'll excuse me, I need to go let my two brothers move into my enormous-yet-affordable New York City apartment, so that I'll have more free time to work on a serum that will make me super cool.