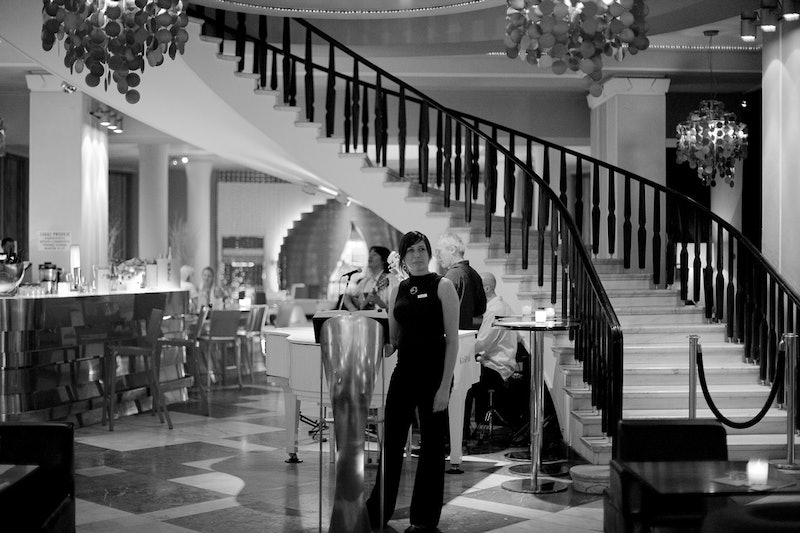 Working in a restaurant means being part of a close-knit, mostly dysfunctional family—and going to a restaurant means interacting with members of a close-knit, mostly dysfunctional family. Hopefully as a customer, you already know to be empathetic, polite, and generally just not a jerk to your server. (This includes, but isn't limited to, refraining from throwing wads of cash at them.) But your good manners shouldn't start when you get to your table—they should come out as soon as you set foot in the front door. Contrary to popular belief and perceived placement on the restaurant totem pole, being a hostess is a hell of a lot of work. And anyone who knows anything about how a restaurant works knows that hosts have ALL THE POWER. If you piss off the host/ess at a restaurant, your entire dining experience can become an endless hellscape. You'll be waiting forever. You'll be seated near a freezing window (and not one with a good view either—just a cold window facing a brick wall).

Hosts and hostesses have this kind of power because their job is shockingly complex. Filling a restaurant is actually a fairly complicated waltz that involves satisfying not just the customers, but also the wait staff who are basically your incredibly demanding siblings. It also means taking into account kid-heavy tables, booze-heavy parties, etc. And if your restaurant also shows sports events, you have to give special attention to game times and segregating fans accordingly? God help you. A harmony must exist and can only be accomplished through the careful brain science a hostess must utilize.

I know all of this because I was a hostess at a wildly popular sports bar in the heart of Manhattan's douche district. It was a super fun but impossibly intense gig. Those men and women who worked alongside me at the noble host stand were some seriously tough cookies. I learned a lot from them and now I will share this knowledge with you. Because I care and don't want you to accidentally earn the venomous hostess scorn during your next night out. Deep breaths:

Respect that hosts are the gatekeepers to your dining comfort

If you're impatient during an especially busy time, you can expect the same lack of mercy returned. Either by way of seating your party directly beneath a frosty A/C vent or immediately adjacent to a toddler's birthday party. Sometimes, sure, this happens on accident—but keep in mind, we all lose our minds a little sometimes and will take our small revenge when we can. However, if you're chill about demanding attention when the joint is clearly slammed, the hostess will notice and reward you accordingly, if at all possible. Like that table full of hot dudes meeting for their Feminist Writers Book Club (I want to believe this is a thing that exists)? They can totally be your dining neighbors—but only if you are cool to the hostess. Tips: ask about the hostess's day, be open to sitting wherever, be patient, stay out of the way.

They control the wait time...

Being a jerk isn't going to expedite your party getting seated. (And if it does get you seated, know that it's only because you're being an immature jerk who is making a scene and we just want that to end ASAP. Also, everyone in the restaurant now hates you, so good luck getting good service for he rest of the night.) When the restaurant is swamped, the host is likely already getting overwhelmed by Seamless orders, juggling online and phone reservations, and dealing with actual human customers. If you demand speedier service, you better believe she's gonna cool you off with the longest wait time possible. With each outburst, that might mean an additional five or so minutes until you get to sit down.

...Except when they don't control the wait time

Sometimes, though, the excessive wait time isn't a punishment designed exclusively for you (I know, hard pill to swallow). The whole place might actually be at capacity, leaving the hostess with no way of making your seating process move any faster. We have a lot of power but kicking an already seated party out before they close with their server and decide to leave on their own is something that's frowned upon. A hostess is not going to risk losing her job to placate your self-important freak-out, sorry. And asking us to, or indignantly acting like we should, isn't going to win you any fans at the hosting booth.

They're in with the servers

Hostesses usually aren't dependent on tips—but servers are. Granted, I haven't met many servers who are intentionally rude or vengeful to tables, but I have met many who are accidentally negligent or otherwise not great at their job. Although most restaurants use a rotation system to ensure equal tables for servers, ultimately it's the hostesses who decide who serves you. If you're cool, they're much more likely to hook you up with a good server. Also, spoiler alert: when coworkers gather at the hostess stand, it's usually not to complain about the weather—it's to evaluate clientele. Make sure you're one of the good ones they gush over and try to help out (extra fries, anyone?).

Guess what most restaurant employees do when they're cut for the night? Down a round or two at the bar where they get at least 1/2-off their drinks. Keep in mind most of the people here are peers and look out for each other. In the same vein, if a customer is especially kind to someone, everyone else tries to react in a way that rewards such behavior. Be a customer everyone vies to transform into a regular.

Sure, most restaurants don't have security, but mine did, and they became like brothers to me. Brothers with whom you share dirty jokes and a love for all things 2 Chainz. And you better believe the second a customer got in my face about something I actually couldn't control, they were just as quickly booted from the establishment. Be nice to the hosts, because pretty much everyone else in the restaurant has their backs.

Most places strictly forbid hosts from accepting bribes. This is partially because it's "immoral" (whatever), but also because generally the host stand is being honest when they report the restaurant is completely void of empty tables. A $20 will get you a thankful grin, not necessarily a booth seat. Money is nice, but it doesn't invent space that doesn't already exist.

When you've made a reservation for six but another two friends suddenly jump on the dinner bandwagon just as it leaves idiot station, that will undoubtedly make life suck for your hostess. That means they have to find extra chairs to accommodate your planning-impaired pals, maybe even another table. But! Let's say you actually planned ahead and made a reservation for 12 people way in advance. First of all, thanks and good job. Second, that's still a pretty big party so when you show up in the lobby, try to bring along as much of your party as possible. Most places necessitate at least half of your entire party to be present before seating. Them's just the brakes. Annoying brakes, but yet—

Menu items sometimes jump in price with zero warning. Dining rooms get rearranged. Heat lamps retreat into storage. Who makes these decisions? No, really—who does decide these things? Because I know for damn sure that none of those things were ever my idea. So basically any attempts to complain about such unsavory changes are wasted on the host. Honestly, you're better off tweeting about it. When shouting at the host about the new absence of the coloring book kids' menus, the only thing you'll accomplish is making another person on Planet Earth bummed out. If you can skip such a feat, please do.