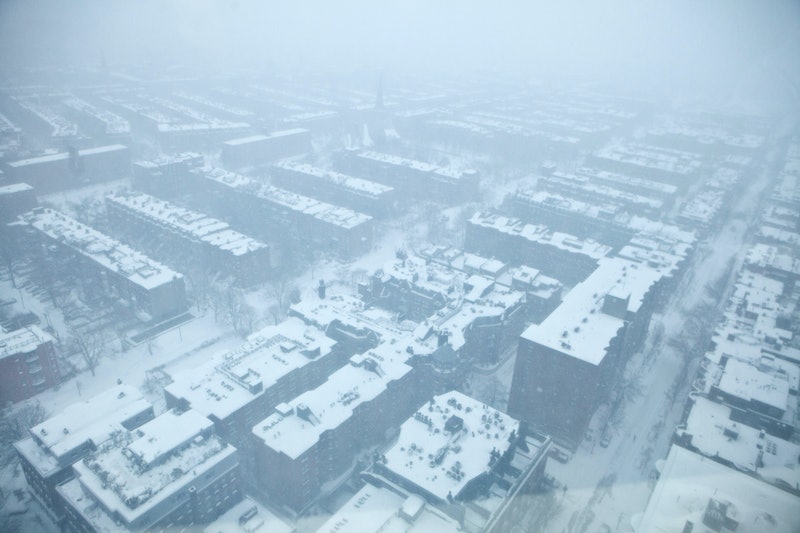 Snow continues to fall at a rate of two to three inches per hour in New England, where winter storm Juno is still lingering. Eastern Massachusetts, Rhode Island, and parts of Connecticut have so far received the brunt of the blizzard, with Boston accumulating about 18.2 inches as of late Tuesday morning. According to The Weather Channel, eastern Massachusetts has seen up to 30 inches of snow, including in the Boston suburbs of Framingham and Littleton.

The Massachusetts coast, including Cape Cod and Nantucket, was also pummeled by high winds and dangerous storm surges on Monday night. The Boston Globe reports that Nantucket endured a massive power outrage, which could take hours to be restored. The island was also hit with widespread coastal flooding, sending several feet of water through downtown Nantucket. Other coastal towns are also reporting flooding from storm surges, adding to the two feet of snow already blanketing the area.

Massachusetts Gov. Charlie Baker declared a state of emergency Monday night. A travel ban is still in effect for the majority of the state, but has been lifted in several western Massachusetts counties around noon on Tuesday, the Massachusetts Emergency Management Agency said. The Boston train and bus service is also shut down until further notice, as emergency workers try to clear the tracks and roads as quickly as possible.

In a press conference Tuesday afternoon, Baker warned that central and eastern Massachusetts can still expect another five to 10 inches of snow by late Tuesday night. So for everyone out there right now, digging out there cars, you may want to wait a bit...

It's a much wetter — and scarier — sight on the Massachusetts coast, where icy water is mixing with two feet of snow and flooding residential streets.

As much as Massachusetts looks like a post-apocalyptic snowscape right now, the blizzard has also given us a few stunning moments...