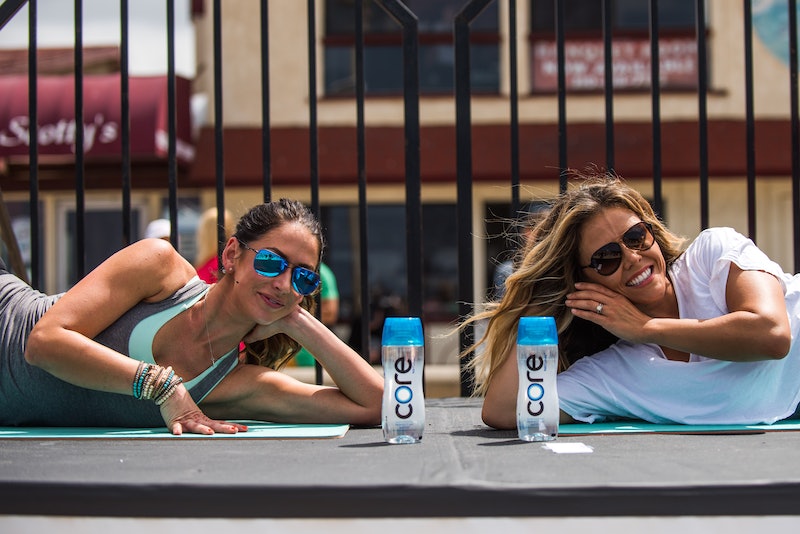 It's a commonly-cited piece of advice for those hoping to get themselves in shape that working out is easier with a buddy — and hey, guess what? It's not just an old saying. A new study from University College London found that romantic partners who make healthy life changes are more likely to succeed if they make those changes together. Ready for a gym date?

The study was published on Monday in the journal JAMA Internal Studies. Participants included over 3,700 cohabiting and married couples over the age of 50 who were taking part in the English Longitudinal Study of Aging. Starting in 2002, they answered questionnaires every four years geared towards examining the health and quality of life among older people in the UK. Here are a few highlights of what they found:

It's worth remembering that the study focused on older folks specifically; as such, we can't technically say for sure that its results hold true for people under the age of 50. Even so, though, it's pretty likely that they do; indeed, according to The Atlantic, the researchers also believe that the buddy system benefits they found for over-50s would apply no matter how old or young the couple in question is.

Me? I buy it; after all, it worked for me. Personal anecdote time: Over the summer, my SO was away from home during the week for work. This meant spent a lot of time in the suburbs, without a car and alone with the cats. So I started working out, partially as a way to get myself more active again and partially as a way to get out of the house and fill some time doing something other than sitting on my ass and reading: I had gotten a bike when I moved out here the year prior; there's an awesome trail literally right outside my door; you do the math. I managed to keep it up throughout the summer on my own... but I am 99 percent sure that if my boyfriend hadn't started coming to the gym with me once the extended business trip was over and the weather got colder, I probably would have fallen off the wagon after the fall. But together, we keep ourselves on track: Three times a week, we hit up our apartment complex's fitness center after work. He runs; I bike; it works.

It's interesting, though, that while the buddy system — especially when your buddy is your partner — works for getting into shape, it doesn't when it comes to dieting. A study published last month in the journal Eating Behaviors found that when couples diet together to lose weight, only one of them usually succeeds. Why? As Bustle's Alanna Greco wrote, "as one partner is accomplishing their goal, the other loses confidence in their own efforts." I;d be curious to know if there's a reason (or reasons) why the support system a buddy is supposed to provide works for fitness, but not for dieting; it might be something future studies could examine.

If you're single, by the way, there's nothing to say you can't make the buddy system work for you, too. HuffPo has some great pointers on how to work out with a friend without ruining your friendship; check 'em out. They're worth it — and so is your health.

More like this
I Spent 2 Years Trying TikTok’s Dating Advice
By Kailynn Johnson
9 TRX Exercises For Beginners, Straight From Trainers
By Carolyn Steber
The Sculpt Society Workouts Bring Out My Inner Backup Dancer
By Carolyn Steber
10 Primal Movement Exercises That'll Improve Your Mobility
By Carolyn Steber
Get Even More From Bustle — Sign Up For The Newsletter
From hair trends to relationship advice, our daily newsletter has everything you need to sound like a person who’s on TikTok, even if you aren’t.