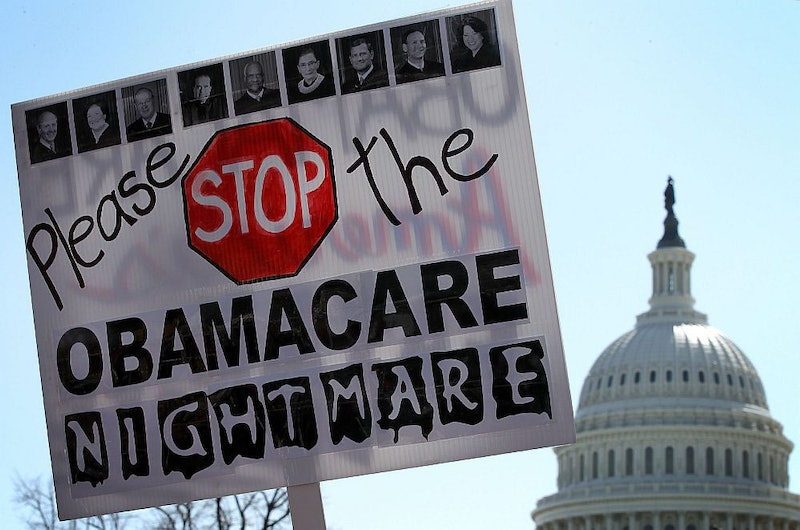 According to a recent Fox News poll, if you ask Republicans if they like Obamacare, only 14 percent say they do. But if you ask that same group if they like the Affordable Care Act, the approval rating jumps to 22 percent. Of course, Obamacare is just slang for the Affordable Care Act; they’re literally the same thing, which suggests that the Republican base might be somehow misinformed as to what the law actually is (how on earth could that have happened?).

Either way, the success or failure of a law — especially one as highly-promoted, reformative, and sweeping as the Affordable Care Act — hinges largely on the public’s attitude towards it. That attitude, in turn, is shaped greatly by the political rhetoric and branding surrounding the legislation in question. As the branding of the Affordable Care Act as “Obamacare” has been one of the most successful political framings in recent memory, it’s worth taking a look at the history of the term and its shifting connotations.

The term is derived from “Hillarycare,” a moniker slapped on Hillary Clinton’s failed health care push during the 90s. Like “HillaryCare,” “Obamacare” originated as a pejorative, used mainly by the law’s detractors to depict it as a sinister plot by one individual to forcibly insert themselves into health care administration.

The term started popping up long before Barack Obama was elected president. Opinion writers would compare the healthcare proposals of the presidential candidates by pitting “Obamacare” against “McCaincare” (that doesn't sound quite as smooth, does it?). The first journalistic use we could find was on May 1, 2008, and like most early instances of the term, it wasn’t used complimentarily.

“Obamacare,” wrote David Catron in the American Spectator, would reform health care by “imposing the will of the federal government on consumers.” The “classic nanny-state liberal” from Illinois would “unleash the diversity police on the health care system” and rely on “shopworn tools of big-government liberalism: central planning, oppressive bureaucracy, and the creation of new entitlement programs.” The Washington Times also appropriated the term prior to the election. “Affordable coverage should not be difficult or substandard,” proclaimed a June 17th, 2008 op-ed. “Under Obamacare, it will be both.” Days before the election, the paper published another op-ed, ominously warning readers to “Beware of Obamacare.”

It’s worth noting that Obama’s original proposals for healthcare reform differed substantially from what ended up in the Affordable Care Act. Most notably, his initial plan contained a public option (literally a government-run health insurance agency) instead of an individual mandate, and so, as a linguistic term, the word “Obamacare” has an inconsistent, shifting referent.

Shortly after assuming the presidency, Obama made it clear that health care reform would be priority number one in his first term, and “Obamacare” quickly became the word of choice in conservative denunciations of the proposal. The Cato Institute used the word in the title of a policy paper excoriating the plan, and the term found its way into many a skeptical Wall Street Journal editorial (the WSJ even compiled an online “Guide to Obamacare” in 2010).

As soon as Obama started pushing health care reform, Republicans in Congress embarked on a year-long, dogged mission to kill the bill at any cost. Republican leadership called it a “government takeover of health care.” Senators warned that the bill would result in the government “pulling the plug on grandma,” and Sarah Palin bemoaned the legislation’s non-existent “death panels.”

This had a noticeable effect on public opinions of the bill. It started faring poorly in the polls, and during the summer of 2009, Democrats who supported health reform were heckled mercilessly at town halls by opponents of the bill. Meanwhile, the legislation was moving through the Senate at a glacial pace, and the public was thus exposed to the ugly process of horse-trading and inside deals that underly any successful bill.

The combination of the bill’s agonizingly slow passage through Congress and the GOP’s concerted effort to depict it as evil had an effect which hasn’t yet worn off: While the individual components of the Affordable Care Act often are often popular in polls, the plan as a whole has almost always had a net negative poll rating. This was true in 2009, and it’s true now.

As Jimmy Kimmel found when he asked pedestrians about Obamacare versus the ACA, people love the ACA — but hate Obamacare.

So, that's how “ObamaCare” came to be used as a pejorative by the Republican establishment. As the bill became broadly unpopular, GOP message gurus realized that, by referring to it as “Obamacare” instead of its full title, they could tie the president inextricably to a policy that people had already decided they didn’t like, thus sinking both the bill and the president’s popularity.

As Ezra Klein notes, “Obamacare” is a misnomer. The bill that ultimately passed was crafted largely in the Senate Finance Committee by then-Senator Max Baucus, the committee’s chair, so if anything, we should be calling it “BaucusCare.”

Nevertheless, “Obamacare” soon became the standard shorthand for the law. An October 2010 survey concluded that the Republicans’ framing strategy had worked: Voters disapproved of the term “Obamacare” by an 18-point margin, but only disapproved of “the changes to the health care system that have been enacted by Congress and the Obama Administration” by five points (sound familiar?). Republicans used the word so much — and so effectively — that House Democrats eventually vetoed use of it in taxpayer-funded emails.

However, there’s nothing inherently pejorative in the words “Obama" and "Care,” except for people who already dislike Obama. Eventually, supporters of the law began to realize this, and very slowly realized that they could use it to their advantage.

In February of 2011, almost a year after the bill’s passage, Jonathan Cohn wrote a piece in the New Republic titled “In Defense of ‘Obamacare.’” A vocal supporter of the law, Cohn predicted that “this bill will be popular someday,” and that in the meantime, the label could serve as “a reminder that this administration did something that will help millions of Americans while starting to put our health care system in order.”

Six months later, Obama himself embraced the term for the first time. “I have no problem with folks saying ‘ObamaCares.’ I do care. If the other side wants to be the folks who don’t care, that’s fine with me.” It was a bit of a straw man — detractors of the bill would point out that the correct pejorative is “Obamacare,” not “Obamacares” — but the sentiment was there. A couple of months later, as the 2012 election was kicking into gear, the official Barack Obama Twitter account sent the following tweet:

This was a turning point for supporters of the law. They now had both a snappy word with which to refer to the legislation they supported and, perhaps more importantly, the president’s permission to use that word.

More than a year after Obama sent that tweet, #ILikeObamaCare is still going strong on Twitter. When the Supreme Court was ruling on the constitutionality of the law, protesters carried “I <3 ObamaCare” posters, and House Democrats — far from banning the word in mailers — sell stickers that say the same. Yesterday, Fox News published an article with the headline, “Five reasons Americans already love Obamacare.” Fox News!

The connotation of the term “Obamacare” has gone from abjectly negative to at least context-dependent, and for supporters of the law, that’s a good thing. By reclaiming the word as a badge of pride, the left has effectively eliminated one of the right’s best weapons in fighting it; Republicans can no longer foster opposition to the law simply by uttering the word “Obamacare.” Supporters of the law now have a way to articulate their support for the law just as easily as detractors could once demonize it.

More like this
Prince William Condemns “Unacceptable” Comments Made To A Black Guest At Buckingham Palace
By Shahed Ezaydi
Dyson Is Dropping Futuristic, Air-Purifying Headphones
By Rachel Lapidos
10 Organizations To Support On Latinx Women's Equal Pay Day
By Caroline Burke and Mia Mercado
Meet The Rugby World Cup Breakout Star Making The Sport More Inclusive
By Shahed Ezaydi
Get Even More From Bustle — Sign Up For The Newsletter