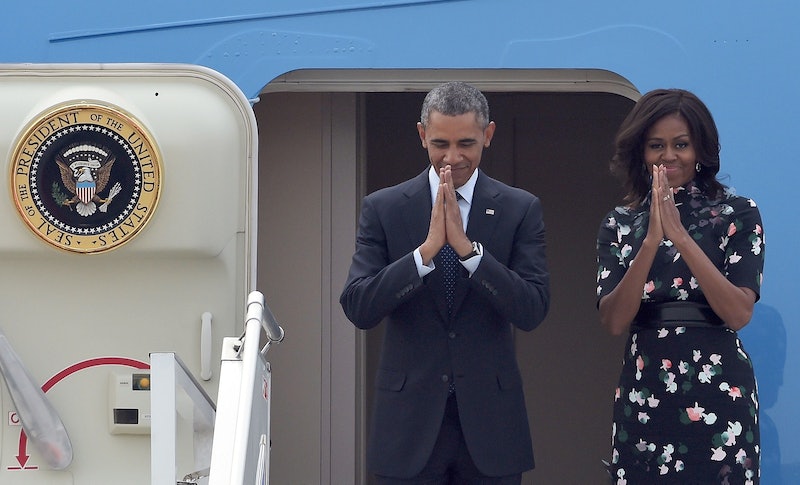 POTUS' trip to India was decidedly genial, to say the least, but perhaps one of the more crucial marks of the president's visit was his subtle challenge to the Indian Prime Minister, Narendra Modi, to promote tolerance and equality. President Obama's push for women's rights in India, as well as religious tolerance and greater economic equality, was a welcome change amid days of camaraderie.

On Tuesday, as he prepared to end his three-day visit, Obama gave a speech at Siri Fort Auditorium in New Delhi to the mostly-student crowd that was broadcast live on local news stations. He said:

We know from experience that nations are more successful when their women are successful. This is one of the most direct measures of whether a nation is going to develop effectively — how it treats its women. When a girl goes to school, it doesn't just open up her young mind, it benefits all of us. Maybe some day she'll start her own business, or invent a new technology or cure a disease. And when women are able to work, families are healthier, communities are wealthier, and entire countries are more prosperous.

Obama's speech came days after Modi launched the "Beti Bachao Beti Padhao," (or Save the Daughter, Teach the Daughter) campaign aimed at tackling the imbalanced child gender ratio in the country. The alarming decline of the number of girls in India — a result of decades of selective abortion targeting female fetuses due to cultural preferences for sons — has become so dire that the United Nations called it a national emergency.

The debate on gender equality escalated after the appalling gang rape and murder of a young woman on a school bus in Delhi, and Obama alluded to the incident, as well as the prevalence of gang rapes in the country:

Every daughter deserves the same chance as our sons. And every woman should be able to go about her day – to walk the street, or ride the bus – and be safe and be treated with the respect and dignity that she deserves.

Obama also touted the First Lady as a model for capable women, calling her a "very strong and talented" wife.

The president also urged the country to respect the rights of religious minorities, perhaps a slight assertion to Modi's right-wing, nationalist Hindu government. He said:

The peace we seek in the world begins in human hearts; it finds its glorious expression when we look beyond any differences in religion or tribe and rejoice in the beauty of every soul. It’s when all Indians, whatever your faith, go to the movies and applaud actors like Shah Rukh Khan. When you celebrate athletes like Milkha Singh, or Mary Kom.